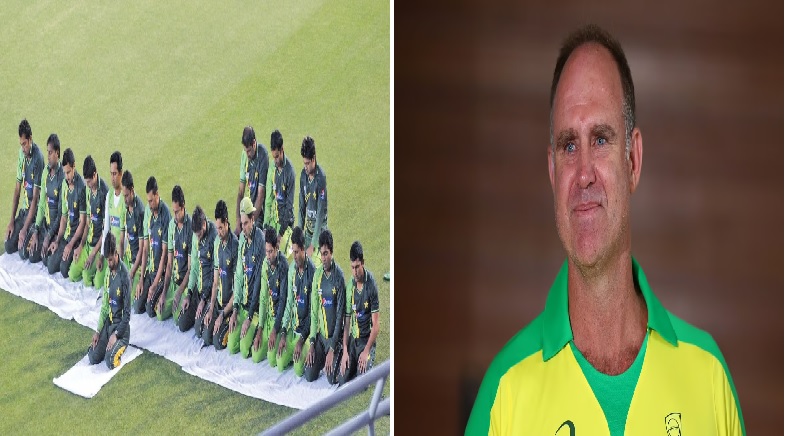 In the clip, Hayden says – “More than anything, boys, which you’ll never see in an Australian cricket dressing room, the whole culture is underpinned by this fantastic sense of spirituality and spirit. I mean everyday, bar none, there is this unbelievable discipline. You can be walking to the lift and there will be a prayer time and at the base of the lift, they’ll be…all of the team in unison, praying….to see the way they engage with each other, to see the way they engage with their own sense of spirituality and purpose around their country is phenomenal.”

While Hayden appears to be charmed by this united show of Islamic piety, he ignores the darker side of this religiosity which segues into bigotry against those who hold different religious beliefs.

The torrid experiences of Danish Kaneria, a Hindu cricketer, who faced discrimination at the hands of his Muslim team-mates has been missed by the Australian. This was the period when an overtly Islamic culture developed around the Pakistani team in the 2000s after opener Saeed Anwar joined the Tablighi Jamaat following a personal tragedy. Christian cricketer Yousuf Youhana converted to become Mohammed Yousuf, ostensibly to boost his chances of becoming captain, but to the shock of his mother.

We have seen regular demonstrations of what this Islamization of Pakistani cricket has delivered: Ahmed Shehzad warning Sri Lankan cricketer Dilshan that he will “burn in hell fire for not accepting Islam”; Sohail Tanvir making an angry slur “Hindu nature is like that (untrustworthy)” after not being picked for IPL 2009 following the 26/11 terror attack; Shahid Afridi breaking his TV because his wife let their daughters watch a TV show where Hindu aarti (worship) was shown; and the most recent expression of the Islamic supremacist mindset by Waqar Younis who was over the moon that Md. Rizwan didn’t just win the recent T20 match against Bharat with his batting, but because he also performed namaz on the field while ‘surrounded by Hindus’.

Not to be left behind, Pakistan’s Interior Minister Sheikh Rasheed Ahmed called the Pakistan team’s win as “victory of the Islamic world (awaam-e-Islam ki fateh)”.

The support of Pakistan-sponsored terrorism in Kashmir by likes of Afridi, and the regular anti-Hindu rants of cricketer-turned-PM Imran Khan just complete the circle of bigotry that envelops Pakistani cricket and society. For that matter, Imran Khan used to think that playing Bharat in cricket was a form of jihad (religious war), even in his playing days!

Hayden might be angling for a longer coaching stint, or he may be genuinely impressed by the Pakistan team’s open display of collective religiosity. But he would do well to talk to other Pakistanis who have seen what harm Islamic fundamentalism has done to their society, and who are not as impressed by the antics of their cricketers. As Ali Haider Habib wrote in the aftermath of the Shehzad-Dilshan episode-

“What was Ahmed Shehzad thinking? One blogger in Pakistan quipped perhaps the cricketer was trying to secure the sports ministry in a future Tehreek-e-Taliban Pakistan (TTP) or Islamic State of Iraq and Syria (ISIS)-led government. But retorts aside, what is most troubling about the incident is that it hasn’t seemed to result in any trouble for Shehzad, who is clearly unfazed by the entire episode.

…One can only imagine what the reaction of the Pakistan Cricket Board would have been had a Sri Lankan cricketer tried to convert a Pakistani cricketer to Buddhism or Christianity. It would not be far-fetched to speculate riots on the streets, demands for expulsion of the guilty cricketer and torrid swipes from the authorities and fans alike.”

Hayden might also want to dig deeper into the bigoted mindsets promoted by likes of Pakistan head coach Saqlain Mushtaq, who was seen preaching to a large audience that anybody who doesn’t follow Islam will burn in the hellfire forever, and that converting to Islam ‘doubles a player’s batting average.’

A meeting with human rights activists who swim against the tide of Pakistani society in trying to get justice for the ~1000 Hindu and Christian girls who are  abducted every year for forced conversion/marriage/sex slavery, will disabuse Hayden of any romantic notions about what Pakistan’s ‘sense of spirituality and purpose’ really means.

The longer Hayden hangs around in Pakistan, he will understand that when a Pakistani ICC commentator congratulates the Pakistan captain for winning against Bharat by saying “Kufr toot gaya”, that phrase doesn’t just mean “end of bad luck” (Pakistan had previously never won in an ICC tournament against Bharat), but has communal undertones and is a form of coded hate speech against anybody who doesn’t believe in the tenets of Islam.

Or maybe, this sort of forced and exclusivist religiosity appeals to Hayden, as a fellow Abrahamic?

“Religion has always been a tremendous reference point with me. When I’m in trouble it’s always something to think about. I ask myself what would Christ be doing in this situation?” said the devout Catholic Christian, Matthew Hayden, in an interview in 2004. The pack mentality of abusing and bullying opponents as part of ‘mental disintegration’ is something that Hayden excelled at in his playing days, and maybe that is what he is asking the Australian team to emulate by praising the Pakistani squad’s ‘spiritual unity’.

It shouldn’t surprise Hindus when some Westerners exhibit a fondness for monotheist Islam, ignoring the religion’s fundamentalist & exclusivist impulses, while looking askance at polytheist/pantheist Hindu Dharma as ‘regressive and superstitious’.

The Abrahamic memeplex has deep roots in Western society, and a study of popular media and culture in the West reveals a sort of love-hate relationship between Christianity and Islam, and an empathy for the Muslim worldview. It is not for nothing that the US-UK led Anglosphere continues to prop up Pakistan, a state sponsor of terror which brutalizes its minorities, and continue to put the onus for peace in the sub-continent on Bharat.