Cricket racism: how Pujara’s Yorkshire team-mates slighted him; will Kohli speak up? 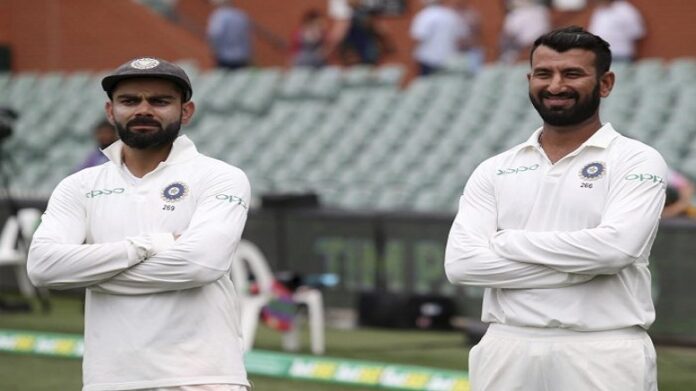 Racism within the cricketing world has been systematically exposed over the last 12-18 months. It started with Black and other cricketers of color in South Africa narrating the discrimination and slurs they have faced in the national team from White players over the years, during Cricket South Africa’s Social Justice and Nation-Building Hearings.

Then last year, British-Pakistani cricketer Azeem Rafiq accused his club Yorkshire of institutional racism. The club carried out an internal investigation which found that Rafiq had been the victim of inappropriate behavior. But Yorkshire refused to take disciplinary action against the accused players and executives, and delayed release of the probe report. Rafiq then testified in front of a UK Parliamentary Committee and laid bare all that he faced from players like Gary Ballance, Michael Vaughan, Tim Bresnan etc. His allegation against Vaughan was also corroborated by current England player Adil Rashid. Rafiq also said that there were times when he was subjected to racial slurs in front of England captain Joe Root, but the later didn’t intervene.

Rafiq stated that Bharatiya test cricketer Cheteshwar Pujara was also a victim of racism during his time at the Yorkshire club. Pujara has had two stints as an overseas player for Yorkshire, in 2015 and 2018. He was given the generic nickname ‘Steve’, a racist reference to people of color on the pretext that his English team-mates found it difficult to ‘pronounce his name’.

“Once I left the club, Cheteshwar Pujara joined the club, and Jack Brooks I think started it where he didn’t feel the need to call him by his first name. Not only Jack, the coaches, the media, Yorkshire Post, Yorkshire website, Yorkshire twitter page, commentators around the world, and some high profile people, everyone called him that. It just shows again, back to what the institutional failings and what that environment showed people how they could behave”, said Rafiq.

One of those high-profile players who called Pujara ‘Steve’ turned out to be Australian spinner Shane Warne. He in fact used that racist reference for Pujara while doing TV commentary during the Adelaide test match last year in the Bharat-Australia series!

It wasn’t just the nickname ‘Steve’, but according to Rafiq, even the name ‘Kevin’ was used for people of colour in a derogatory manner.

“Everyone called (India’s Cheteshwar Pujara, ‘Steve’), high-profile players around the world, and it shows the institutional failings. ‘Kevin’ was something Gary used for people of colour in a derogatory manner. Gary and Alex Hales got close to each other playing for England but I understand Alex went on to name his dog Kevin because it was black. It is disgusting how much of a joke it became,” revealed Rafiq.

Taj Butt, who was employed within the Yorkshire Cricket Foundation as a community development officer, also gave evidence against the club: “[There were] continuous references to taxi drivers and restaurant workers when referring to Asian community…They called every person of colour ‘Steve’. Even Indian Test player Cheteshwar Pujara, who joined as an overseas professional, was called Steve.”

This is what Pujara says in the above video: “Well, I would prefer Cheteshwar. But its difficult to pronounce so the guys have come up with ‘Steve’. But personally, I would prefer Cheteshwar. Jack Brooks started off with this (in 2015). He couldn’t pronounce my first name so he was asking me what nickname do I have. I said I don’t have any. So he said, ‘we will start calling you Steve’.”

Do note the way in which the cricket website Cricinfo terms it a ‘joke’ and Pujara too feels compelled to play it down despite stating that he would prefer people call him by his real name. This is how many Bharatiyas, especially Hindus, have internalized and rationalized every-day racism and discrimination targeted against them. Brooks has now apologized to Pujara.

It is another matter that Azeem Rafiq has skeletons in his closet too. He had tried to groom a minor Hindu girl for sex in 2015, when he was 24. He also made anti-Semitic comments on social media in 2011, for which he has now apologized.

Another interesting aspect of this whole saga has been the complete silence of BCCI and leading Bharatiya cricketers (current and former) and commentators. That the nickname ‘Steve’ given to Pujara was a racist way of demeaning Asians was clear since December 2020 at least. Yet, no one from Bharat’s cricketing establishment has spoken up.

The silence of captain Virat Kohli is especially intriguing. In his early years, he was quick to take the bullying and intimidatory tactics of teams like Australia head on. During the feisty 2017 series when Australia toured Bharat, Kohli was right to call out the unethical behavior of Australian captain Steve Smith who tried to get help of his dressing room to decide whether to take a DRS or not. Smith later gave the lame excuse that he had suffered a ‘brain fade’.

Back in Australia, former cricketer Ian Healy took up cudgels on his team’s behalf, castigating Kohli for ‘not showing respect’ towards Smith, umpires and the game. Playing usual Australian mind games, Healy said that in the past Kohli’s aggression towards the opposition had been good for the Indian team as “Indian cricketers are more timid than they look and they let on,” but now Kohli’s behavior was putting “pressure on his own players”.

For serious cricket watchers who know how Australian cricketers and media target the captain of any touring team using any and every tactic available, this statement by Healy was a source of much dry humor.

Kohli reminded Healy of the tantrum he had thrown when given out by an umpire in 1997, behavior which earned him a two-match suspension. Exactly one year later after the ‘brain fade’ episode, Smith and the Australian team were caught on camera for ball tampering in South Africa. This time around, Cricket Australia had to act, and suspended Smith and his deputy Warner for 1 year from all cricket.

So one would expect a character like Kohli to speak up on such an important issue, which affects all players of color and is finally getting heard in the cricketing world. More so, when we see how Kohli has never shied away from taking positions on sundry non-cricketing matters.

Whether it is sermonizing against Diwali crackers for causing ‘pollution’, berating Indian fans for booing Steve Smith during a 2019 WC match, acting in a #MatKarForward campaign along with Bollywood celebs to warn against ‘hate speech’ when Tablighi Jamaatis were being criticized for their atrocious behavior during the Corona first wave, captain Kohli has never held back. The most latest example came during the T20 WC when Kohli lashed out at Indian cricket fans for ‘targeting Mohammad Shami over his religion’, ignoring the fact that it was a manufactured outrage as the offensive comments against Shami were planted by Pakistani accounts and a handful of anonymous users. Actually, it was Kohli who was truly trolled for Bharat’s below-par performance in the T20 WC, so maybe he can be excused for venting his ire at fans using the Shami issue as an excuse.

It would be fair to say that as his career has progressed, Kohli has grown increasingly conscious of his public image and hence feels compelled to virtue signal on issues dear to left-liberal elites. This is something which all celebrities and public figures need to guard against, lest they become disconnected from the grassroots.

To be honest, only a handful of Bharatiya cricketers like Gavaskar, Shastri, Ganguly have spoken cogently against racism and double standards of the Anglo-dominated international cricketing order. But even they have not publicly commented on the racist tweets from 2017-18 that recently surfaced in which IPL’s foreign stars like Brendon McCullum, Jos Butler, Eoin Morgan mocked how many Indians speak English, a non-native language imposed on the nation by our colonized elites. These cricketers earn millions by playing IPL, but neither they, nor their franchises have apologized as yet, and Ganguly-led BCCI is also silent.

Even the racial abuse that Asian teams are routinely subjected to at grounds like SCG on every tour to Australia, which Siraj and Bumrah complained against in January this year and R. Ashwin corroborated, was underplayed by commentator Harsha Bhogle who sounded almost apologetic when he said ‘a few bad apples exist everywhere’ or something to that effect. A few fans were evicted from the stadium and a Cricket Australia probe confirmed that the racial abuse indeed occurred, but the evicted fans were later cleared of racism charges.

Bharatiya cricket, especially Hindu cricketers, can learn something from how other players of color have stood up for themselves and for their communities in England and South Africa.