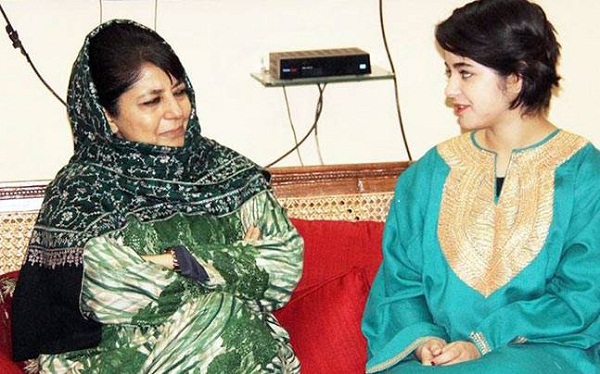 Zaira Wasim, the 16 year old girl from Kashmir, who had bagged a role in Aamir Khan starer ‘Dangal’ which is based on a real story of wrestlers from Haryana (Mahavir Phogat and his daughters – Geeta, Babita & Ritu Phogat who have brought gold medals in Commonwealth games), got into trouble on social media after she posted the photos of her meeting with J&K CM Mehbooba Mufti who seemed to have conveyed to her that she is a role model for Kashmiri youth. It seems that she was abused for meeting the CM who is currently perceived as ‘pro-Bharat’ in J&K, and being called a role model for Muslim youth / girls, as the abuse happened only after she posted her pictures with Mehbooba Mufti.

But the way the events/ responses unfolded makes Zaira Wasim a representative case study – of Kashmiri teens. We can begin with abusive comments hurled at her on social media : 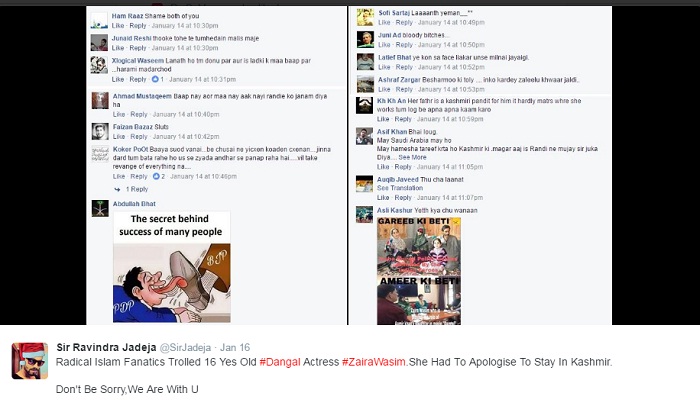 The abuses and threatening with revenge reek not only of Islamic fundamentalism but also of the fact that ‘Separatism’ has become mainstream in the valley of Kashmir. The cheap trolling suggests that believing Muslims are not willing to accept a boy-cut hair girl without burqa as their role model, and may be, they are also not willing to accept Kashmiris meeting warmly with politicians who are currently being perceived as ‘pro-Bharat’. However, Zaira was quick to apologize and in fact, issued a second statement saying she was not being forced to apologize. Her first statement of apology went like this :

The pressure of community clearly got on to the 16 year old teenager, it seems to get on to every progressive Muslim in a Muslim majority region. She surely felt compelled to render an apology but then deleted it.  Then she issued another statement :

‘Regarding my last post, I have no idea why this has become such a big issue. I just wanted to make sure that I did not hurt anyone’s feelings and all of a sudden it has been turned into national news. Again and again I am telling people that I have not been forced into anything by anyone. This was post was not meant against anyone, just wanted to make sure that people were not hurt by what I was doing. From media to everyone else, please don’t blow this out of proportion. Neither was I forced nor am I against anyone. Hopefully this post just stops this once and for all.’

Then she deleted this statement too from her social media accounts. However, many celebrities and people from different ideologies took to social media expressing support to Zaira.

A quick peak into her background suggests that though she herself is developing into somewhat a liberal (for her community), her parents and surroundings have immense effect on her. Quoting this biographical account of Zaira Wasim, she studies in St. Paul’s international School and has appeared in a couple of commercials earlier :

‘Her parents were against her decision to act in the film but Zaira’s school principal convinced them for letting Zaira work in the film.’

Then another news hit the social media that Zaira refused to stand up for the national anthem in a movie hall of Jammu. Later she also denied commenting on it. There is also news that she has received death threats and the issue has been raised in J&K assembly.

The ways incidents have turned out, she may be doing it to save herself from threats, after all she is just a 16 year old living in a Muslim majority area. But the way her apology statements were worded, her previous posts on social media and the news that she didn’t stand up in respect of our national anthem, hint that even liberal-minded Muslim teens from well to do families (her father is a banker), seem to be believing in ‘Separatism’ and ‘Azadi’, which itself has a history of injustice to Kashmiri Hindus.  Some of her previous posts on social media : 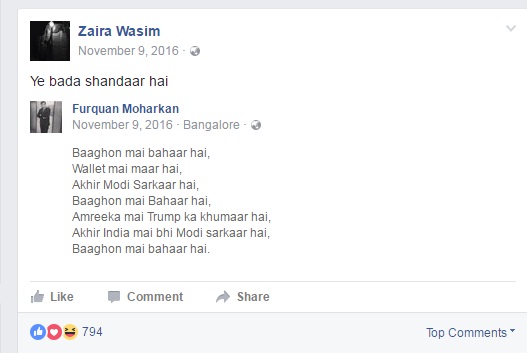 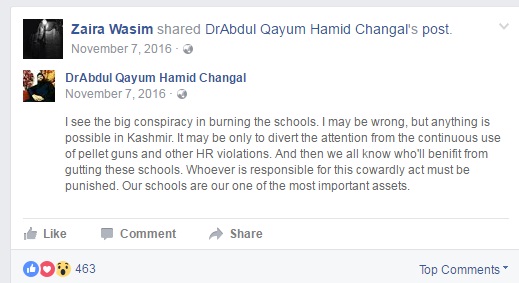 So, her previous posts suggest that she may be a separatist at heart. Of course, it is futile to blame a 16 year old. It is uncertain if these teens have been taught real history of the state and country. The responsibility lies somewhere else. She is the next Malala, the moderate Muslim, who might shift to Bollywood as a liberal ambitious Muslim in future and while being considered a ‘bad muslim’ by a vast number of people in her community, will still choose not to blame extremist Islam. Just like how Aamir Khan came out in support of her while not naming the real problem : 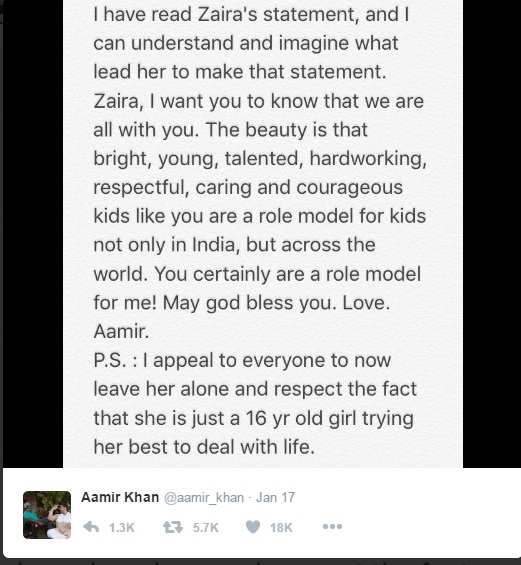 Not only Zaira Wasim, there must be hundreds of Kashmiri teens who have a dash of separatism in them. She being a celebrity, is a representative case study from various aspects as mentioned above. Fear, threat, abuse, devotion, community, religion, confusion, extremism – all inter-twined, sometimes ironically.

However, Dangal is a super-hit and everybody has made a lot of money. Hundreds of patriots also watched it. But then, a movie is only a movie. We made that feature film a block-buster, in which the lead actor is perceived anti-Hindu in a Hindu majority nation, and one of the actresses refuses to stand up for national anthem!

Reopening of Nadimarg case exposes apathy of past govts