Yoga is Bharat’s gift to the world. Say it! 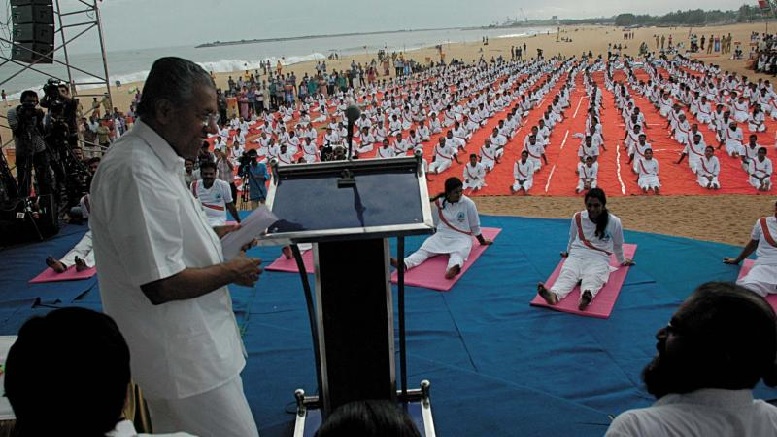 Have commies taken to yoga? Going by the remarks of Kerala’s twice elected Marxist chief minister, Pinarayi Vijayan, on World Yoga Day (June 21), the answer may be a surprising ‘yes’, even if the real motive is to prevent the BJP from hijacking what is now a global phenomenon.

The 77-year-old leader seemed favourably inclined to the ancient Hindu spiritual practice of disciplining the mind and body so long as its propagation was confined to health care. Linking it to a particular religion or faith could end up divesting the majority from its benefits, he warned.

The logic seems perverse coming from a politician hailing from the largest Hindu community in Kerala, the Thiyyars, who comprise nearly a fourth of the state’s population. Mr. Vijayan has come a long way since his early days as a handloom weaver and a jail stint during the Emergency.

The CM’s own physical exertions in the evening of his career may not extend beyond raising his hands to do the customary Lal Salaam at party gatherings. But he needs to be congratulated for at least realizing that yoga is a “fitness program based on science”.

That the science stretches back to Bharat’s hoary past, even beyond the sutras of maharshi Patanjali, is something best left unsaid. You may as well bang your head against a wall than din into hardened Marxist craniums that the first yogi on Mother Earth was none other than Bhagwan Shiva, also known as the Adiyogi. The perceptive powers of those primed on Marx and Engels are necessarily limited.

Mr. Vijayan, however, comes across as more practical and worldly wise when compared to his yoga illiterate colleagues from Bengal and Delhi. His boss in the party’s politburo, Sitaram Yechuri, a Telegu speaking Brahmin, had once compared yogic asanas to that of a dog stretching its front and rear legs and taking a deep breath. Mr. Yechury is a copybook example of the educated unenlightened churned out by JNU. Deep breathing may in the least have helped him chuck smoking and unclog his lungs. But let’s not deviate from the real story.

Mr. Vijayan’s real problem, like his colleague up north, is not so much with yoga as the possibility of the BJP using the mass mobilisation on Yoga Day to promote its Hindutva agenda at the cost of the country’s secular credentials, howsoever counterfeit. Mr. Yechury, on his part, had likened the celebration to a stratagem adopted by dictators in the past, a diversionary ploy to take people’s minds off basic issues like hunger and starvation.

Again, it is pointless explaining to lifelong commies that yoga has a universality which goes beyond artificial western political constructs like secularism. It ennobles the mind by raising the quality of human consciousness. Here lie the seeds of a real plot which the politics fixated Marxists fail to smell. Only that it is cosmic in nature.

Were Mr. Vijayan’s cohorts put through the motions of meditation, many may opt to give up their obsession with stuff like class struggle and other pieces of Marxist hocus-pocus. The dictates of Marxism militate against basic human instincts. It is the inherent chicanery of its adherents which has reduced them to a rump the world over.

Fear of yoga’s growing popularity prompted the Kerala CPM to takeover an existing fitness center at Peravur (Kannur) and rename it the Indian Martial Arts Academy and Yoga Study Centre. Kannur happens to be Mr. Vijayan’s home district where commies and sanghis have been at each other’s throats for many years.

The purpose behind opening a yoga center in a communist conclave was to decouple yoga from its Hindu roots and replace it with communist terminology like “people’s resistance to lifestyle diseases” which almost sounds like an armed rebellion against ill-health.

Physical instructors were directed to customize yoga and make it comrade friendly. Thirty ‘secular’ asanas were identified. Yoga’s centerpiece, the surya namaskar, was omitted to avoid invoking the sun-god (surya) or intone the sound of AUM as a concession to Muslims and Christians. Mosque and Church frown upon the practice, the reasons for which have never been clear. The sun is the fulcrum of the solar system. Mullahs and bishops live off its rays just as much as Hindu priests. So why the reluctance to give it a nodding respect?

Imagine the look on the visages of budding communist yogis if told that each yoga posture, including the fortunate 31, has a presiding deity, all being vested in the sun. Hence, the importance of the sun salutation. The brightest orb in the heavens was the object of reverence even among the Mayans, Egyptians, Aztecs, and the Tibetans.

As for AUM, it is a universal sound, the only one which even the dumb can make. Intoned with intensity, its vibrations reverberate in the three worlds: earth, atmosphere, and heaven. Housed within humans is a miniature cosmos whose depths can be plumbed by meditation (dhyana).

Only the daft would sniff religion in any of this. Yoga, in fact, predates organized religion with its prescriptive beliefs.

The communists further showcase their ignorance by claiming that their brand of yoga is focussed solely on yama (restraint or moral discipline) rather than religious symbolisms. They know not that yama is only the first of the of “eight limbs of yoga”, each of which is a step toward self-realization.

Marxist yoga seeks to conveniently ignore niyama (rules and duties), the second limb, and jump straight to the third, asanas (postures). The key to healthy living, however, lies in following the precepts of niyama without which asanas lose their efficacy. Shaucha (ablution), santosh (contentment), tapas (discipline), svadhyaya (self-study) are crucial elements. All this would probably be gobbledegook to Marxists.

In fact, even the commie acceptance of yama is a sham. Patanjali’s sutras subdivide the path to cultivating restraint into five, the first of which is ahimsa i.e., non-violence in thought, deed, action. It is amusing how the proponents of an ideology cradled in bloodshed and armed revolutions talk glibly of yama, and in the process commit violence with another of its parameters, satya (truth).

Anyone acquainted with the history of communist regimes the world over will know that moral concepts like truth cannot go hand in hand with one-party rule system with violence at its core. And they call it the dictatorship of the proletariat. Thousands of political opponents have been done to death in communist rule even if we ignore the genocidal pogroms of Mao and Stalin.

Kerala is no exception. Political killings have been the norm in Kerala since 2000. Well over a hundred RSS workers have been done to death according to a report which this writer had once edited for the S P Mukherjee Foundation, a BJP think-tank.

Yoga, admittedly, cannot be copyrighted. It has a universality which anyone is welcome to mould in keeping with individual or group needs. But that does not mean that Hindus lose the right to remind the world from time to time that yoga is Bharat’s gift to the world. Failing which we may someday wake up to see yoga morph into a Chinese or Christian asset.

Unfortunately, it is Hindu spiritual masters who are shy of mentioning yoga’s Hindu ancestry in public. The founder of Isha Foundation, Jaggi Vasudev, better known as Sadhguru, is among the most successful spiritual masters with millions of disciples in Europe and America. But you will almost never hear him utter the word Hindu. His bio describes him as a profound mystic.

The Congress party abounds with Hindus who frequently wax eloquent on issues they know nothing about. The latest to join the list was the wealthy lawyer, Abhishek Manu Singhvi. His tweet on Yoga Day, “Neither yoga will become more powerful by chanting Om, nor will the power of yoga be reduced by saying Allah” revealed the extent of his spiritual shallowness.

Shashi Tharoor, the suave diplomat turned politician and a wordsmith to boot, is fond of imparting lessons on what it means to be Hindu. His hypocritical utterances in praise of the anti-Hindu dynasty which runs his party speaks poorly of his own Hindu credentials.

That yoga and he have been lifelong strangers is no surprise. Asked of his favourite asana by an admirer on twitter, prompt came the response in the shape of a graphic which showed a woman slouched on a sofa, ears plugged to music, and legs a-dangle. Sofasana, said the caption.

The good news is that serious yoga practitioners don’t usually take their variants seriously. Christian instructors at the U.S. based Holy Yoga teach members to live out the Gospel through yogic means. Most end up gravitating toward the original source, the AUM of all things.

Vamsee Juluri, a professor of media studies a San Francisco, summed up best in a signed article for HuffPost in June 2015: “The truth is that yoga has gone global without some imperial, world-dominating Hindu agenda accompanying it. That has always been the greatness of Hindu universalism, that it expresses itself as a universal concern rather than a parochial dogma.”