Why no caste angle in an Ambedkarite IAS beating a Brahmin journalist? 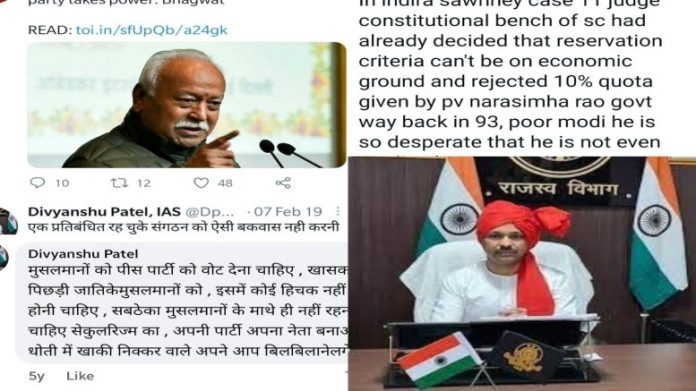 If you are following the Block Panchayat elections of UP, you would certainly have come across the video of Chief Development Officer Divyanshu Patel beating a reporter named Krishna Tiwari.  The hapless journalist was beaten by the IAS officer Patel allegedly for simply covering the elections. Later, after the issue became too hot to handle, he also had to tender an apology

Journalism is the fourth pillar of democracy nd this is how this crucial pillar is being attacked by bureaucrats..#Grievous#Arrest_CDO_दिव्यांशु_पटेल #UttarPradesh pic.twitter.com/RMKBhzLRsl

The officer has a large footprint on the internet that gives an accurate picture of his ideology and thinking process. In his student days he studied in JNU, he was interviewed by Ravish Kumar of NDTV where he claimed that he has been discriminated against because of his jati and Brahmanvaad and Manuvaad are conspiring to hold back others from success.

Nevertheless, he was selected as IAS in the year 2017, under a government which was apparently conspiring against him. His selection did not mellow him down. A staunch Ambedkarite and BAMCEF member since his JNU days, he continued his activities while in office. Curiously, his name was given by the Brahmin guide of his father in PhD.

Despite there being a ban on government officers indulging in politics and criticising the government, he continued in his activities. In the above tweet, the PM is referred to as “poor modi” and the officer is criticising a government policy that he is supposed to implement. Would he implement the same in good faith?

As for the matter of 10% EWS reservation, the provision by PV Narasimha Rao was brought without any change in constitution and was thus quashed by the court. Modi government first brought the amendment in Constitution and then the rules for reservation. Thus, it is Mr. Patel who does not have basic knowledge of constitutional issues.

The ideology of Patel is not only anti-savarna, but also anti-Hindu. After his selection in IAS, he was interviewed by Ambedkarite publication National Dastak. His room in Delhi is showed, which is frankly quite a lot bigger than most aspirants get and even has an AC!

In the interview he waxes eloquent about JNU, bahujans and assorted topics related to his preparation and that is probably fine except he is not a disadvantaged person from any angle as most observers in the video will immediately notice. However, that is the claim he makes many a times.

His marriage was an occasion of celebration for Ambedkarites as he married a savarna girl and that too without any Hindu rituals. His marriage was conducted in front of Constitution, Ambedkar and Buddha etc.

He has in the past supported Peace Party, which has demanded for Islamic rule in Bharat.

Also notice the derogatory reference to RSS, which has often been part of his public posts, even after selection into IAS. Look at his hate for Ram Temple! When RSS chief Bhagwat supported Ram Temple, he called this “bakwas“(bullshit).

Now a person who has only spewed venom against Hindus, particularly Brahmins, who has his idols as persons most inimical to Hindu Dharma and who has these inclinations even after selection in IAS can definitely be referred as biased.

A  person biased against Brahmins, is beating a Brahmin in full public view. If someone say this is not a ground for thorough enquiry into the deeds of the IAS, that person too is biased. However, IAS in itself is a powerful lobby and likely he will not face any action.

It is upto us Hindus to identify such officers and keep a close eye on their deeds. They are going to become the policy makers of our country and our states. Unless the Dharmiks mount a strong protest, bad days are ahead.

Asian faiths try to save sacred Swastika corrupted by Hitler