Why is Holi Celebrated? 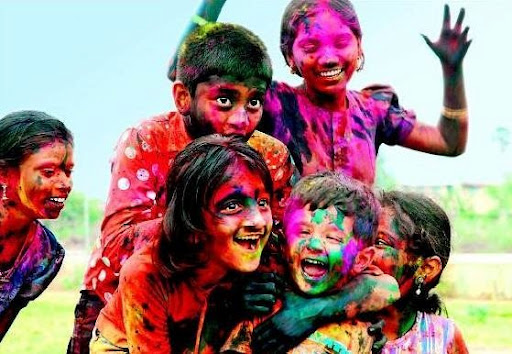 Holi is a Hindu festival that marks the arrival of spring and is also celebrated as a harvest festival. It is also known as ‘Phagwah’, derived from the name of the Hindu month Phalgun, because it is on the full moon in the month of Phalgun that Holi is celebrated. Known widely as the Festival of Colour, it takes place over two days, and is a celebration of colour and love, as well as the triumph of good versus evil.

Holika Dahan takes place the night before Rangwali Holi. Wood and dung-cakes are burned in a symbolic pyre to signify good defeating evil. As per the Bhagavata Purana, there once lived an arrogant Asuric king Hiranyakshyap who considered himself a god and wanted everybody to worship him. To his annoyance, his son, Prahlad began to worship Bhagwan Vishnu. To get rid of Prahlad, Hiranyakshyap asked his sister, Holika to enter a blazing fire with Prahlad in her lap, as she had a boon to enter fire unscathed. However, Prahlad was saved for his extreme devotion to Bhagwan Vishnu while Holika was burnt to ashes. Hence started the tradition of burning Holika or the ‘Holika dahan’.

The next morning, people gather in public spaces and take part in Rangwali Holi. This is a raucous affair where people chase each other around, throwing handfuls of coloured powders (known as gulal) and water at one another.

In the Braj region of India, where Bhagwan Krishna grew up, the festival is celebrated for 16 days (until Rangpanchmi) in commemoration of the divine love between Radha and Krishna. Krishna loved Radha, but felt self-conscious about how different their skin-colours were. So on the advice of his mother, he went and playfully painted her face so it was the same colour as his. People of  Braj also celebrate ‘Lathmar Holi’, a recreation of a vist by Bhagwan Krishna, who hailed from the Nandgaon village, to Radha’s town, Barsana. It is said that Krishna teased Radha and her friends, who in turn responded by taking offence and driving him out of Barsana.  The men from Nandgaon visit the town of Barsana every year, only to be greeted by sticks (aka lathis) of the women there. The unlucky ones are captured by the enthusiastic women who then, make the men wear female clothing and dance in public. The festivities take place at the sprawling campus of the Radha Rani temple in Barsana, which is said to be the only temple in the country that is dedicated to Radha.

Celebration of Holi has many regional variants as well. In the south of Bharat, people celebrate the sacrifice of Kaamadeva who risked his life to revoke Bhagwan Shiva from meditation and save the world. Instead of Holika Dahan, they celebrate Kama Dahanam. In West Bengal, Holi is known by the name of “Dol Jatra” – it is celebrated by placing the murtis of Sri Krishna and Radha on a picturesquely decorated palanquin which is then taken round the city or village.

Traditionally, safe natural colours were used by applying turmeric, sandalwood paste, extracts of flowers and leaves, but recent years have seen the emergence of some chemical colors which can be harmful. It is best to stick to natural alternatives, which are again becoming more easily available.

How long has Holi been celebrated for?

Holi is an ancient celebration. Mentions of it can be dated back to fourth century poetry, and it was described in a 7th century play called Ratnaval:

“Witness the beauty of the great cupid festival which excites curiosity as the townsfolk are dancing at the touch of brownish water thrown from squirt-guns. They are seized by pretty women while all along the roads the air is filled with singing and drum-beating. Everything is coloured yellowish red and rendered dusty by the heaps of scented powder blown all over.”

Should we stop celebrating Holi as it damages the environment?

It is often observed that many environmental activists get activated around the time of major Hindu festivals. While no one denies the need for greater environmental awareness in all sections of society to conserve and protect natural elements like air, water and land, selectively targeting ancient Hindu festivals and traditions which bind society together does smack of an agenda.

One of the common allegations hurled at Holi celebrations is wastage of water. Such activism finds a willing partner in our pseudo-secular & liberal media; a perception has thus been created that Hindu festivals and traditions are damaging for the environment – Diwali causes air pollution, Ganesh visarjan pollutes water, Holi wastes water and so on. But as is often the case, a dispassionate deeper analysis shows that the real culprits are elsewhere. It is the extravagant, luxury seeking modern lifestyles that are causing real damage – not the handful of crackers burst or bucketful of water splashed by a child. A meat based diet consumes far more water than a plant based one, as the below info-graphic from the WaterFootprint.org shows But how many articles in mainstream media have you read around the time of Bakr-Id calling for a move to plant diets in the name of water conservation?

Yes, events like ‘Rain Dances’ seen in certain residential societies or parties during Holi must be avoided – many parts of our country like Marathwada are reeling from severe drought and hence we must all act judiciously, not just on Holi, but all days of the year. Investing in rain water harvesting in our housing societies, fixing all plumbing leaks, ensuring zero wastage while brushing teeth, bathing, washing clothes or cooking, shutting down golf courses and cricket stadiums during summer months…all these would go much further in solving the water crisis, than asking a child not to use his pichkari on Holi.

In the end, Holi is a time for people to get together and enjoy themselves. It is a time when friends, families and communities can get together to revitalize relationships and strengthen emotional bonds.