What will it feel like to live in a Muslim dominated Bharat? 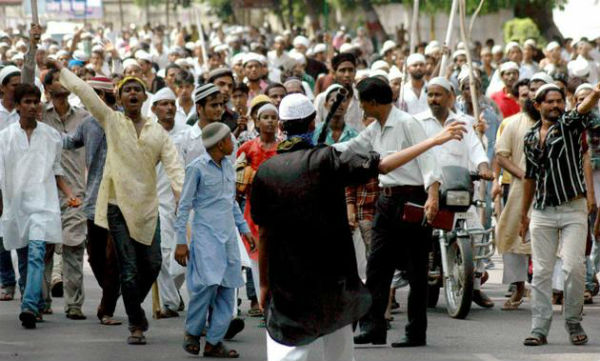 Have you ever had the experience of walking through a Muslim dominated area? Did you encounter any eerie feeling or was it a neutral passing by experience for you? It doesn’t really matter whether you belong to the first category of people or the second category, or you probably might have never walked through/passed by a Muslim majority area. But that doesn’t really matter. One reality that is facing Bharat as a nation is turning into a Muslim majority nation.

It is often cited that by 2050 Bharat will have the largest Muslim population in the world, and it is projected that by 2061 even parts of the heartland like Western UP will be Muslim majority. Innumerable reports and incidents prove that the minorities in Muslim dominated nations have a tough time surviving. Obviously, for the liberals, the argument is that being a religion of peace, Islam and its increasing followers can bring no harm to others. It is for such ‘away from the truth’ liberals that certain facts have to be presented which demonstrate what a Muslim-dominated Bharat will feel like.

Here are certain parameters that need to be considered:

1.) How the minorities in Pakistan and Bangladesh are treated?

The two countries carved out of Bharat – Pakistan and Bangladesh – are the best examples of how minorities are treated in a Muslim dominated nation. Hindus living in these countries continuously face prosecution and conversion dangers. Besides Hindus, other minorities face similar threatening situations. And despite being in the news, there is never any uproar on such ill-treatment of the minorities.

2.) How gays and lesbians are treated in Muslim dominated places?

In Bharat, the LGBTQ community often complains about the barbaric Victorian-era Section 377 of the constitution that makes homosexual acts punishable with 10 years imprisonment. But as per Islam, any act of homosexuality is a sin. In Malaysia, homosexuality is a crime punishable by 20 years in jail under Malaysian laws banning sodomy. In the more conservative Muslim areas, such acts invite the death penalty.

3.) How non-Muslim women are treated in Muslim dominated places?

They are many instances reported from Pakistan and Bangladesh about the way women and girls belonging to non-Muslim families are treated. These women go through abductions, conversions and much other ill-treatment only because of their faith. In Bharat too, there are many cases of love jihad which are carefully ignored by the mainstream media. Such instances will only rise in the future.

Wherever Muslims stay, they are more than happy to be governed by the Sharia law, rather than the constitutional law of the land. Take Britain for example, which has a sizeable number of Muslim population, and the nation is witnessing a change. Many Muslim clerics have opined that Muslims can use Sharia law in the UK. In Bharat, there’s much hoopla about the Triple Talaq Bill that the NDA government is so keen on debating. In fact, there are Muslim women boards who want to stage protests against the bill. Considering that the bill will make their lives more comfortable and easy, one fails to understand why these women support the continuity of Triple Talaq and loathe its abolition.

5.) How places of worship of other religions are treated?

For a Muslim, entering a non-Islam place of worship is haraam/sin. That entails that all the religious places of the future minorities of Bharat will not be a good place for any Muslim to enter. But does that mean that they will cease to destroy them? The answer is negative. Not just in the country, but across the globe, Muslims have destroyed various places of worship in order to spread Islam. In Bharat, Somnath Temple has faced the wrath of Muslim invaders innumerable times.

Despite providing these facts, the libtards and anti-Bharat forces will continue to rant against patriotic energies in the country and keep repeating parrot-like that nothing will change in the country even if Muslims are in majority in the nation. But let’s ask them one question – Will Bharat continue to remain a democracy after Muslims become a majority?