Westernised and colonised underpinnings of social sciences  in Bharat – Part 1 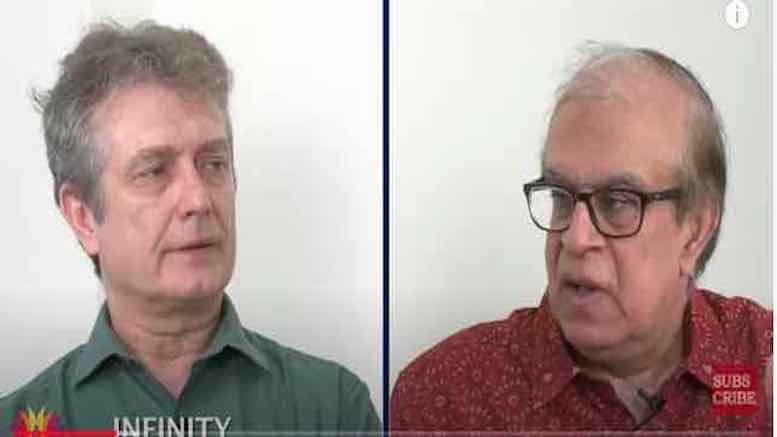 Social Sciences in contemporary Bharat is an entirely Western import, totally alienated  and disconnected from our tradition. In the first of a two-part series, Rajiv Malhotra explores this with friend and scholar, Come Carpentier, who has been in Bharat since the past  24 years.

Polymath and  an author of several books and journal articles, Come Carpentier  is  currently the Convener of the Editorial Board of the World Affairs Journal, a quarterly publication dedicated to international issues, sponsored by the Kapur Surya Foundation (a co-sponsor of the “World Public Forum for Dialogue of Civilisations”) New Delhi, Bharat, and has, over the years, collaborated with Rajiv Malhotra.  Come has a PhD in sociology from a  university in the US and is  deeply interested in studying Bharat and its Westernisation and colonisation. He shares his time between Bharat, France, Italy and Switzerland. He has lived and traveled in more than fifty countries on four continents.

Rajiv Malhotra (RM) : Since the founding father of what is considered social sciences was a Frenchman,  why don’t you introduce him personally?

Come Carpentier (CM): Henri de Saint-Simon belongs to a very old noble French family and he became a supporter of the French revolution. He had fought in the American war of liberation, on the American side (The French assisted the Americans) and he became deeply influenced by American ideas of republican freedom and secularism. As a result, he developed a concept of society which he thought should be completely scientific. In fact, he thought that the model for any social science should be astronomy and mathematics. He thought that social laws should be  as precise, for example, as the law of gravitation. So, on that basis, he built the school of industrial philosophy. This was the beginning of the Industrial Age and he tried to find universal principles to apply to all human beings in order to  build an ideal society.

RM: But he was an atheist.

CC: He was an atheist.

RM: And  it  was a mechanistic model of the world. So there is no spirituality no divinity. It’s matter.  Matter is all there is and so matter is being organized into life. Life is being evolved into human beings and so somewhere, human beings are ultimately matter and that’s why with physics and astronomy and all that you should be able to model the behavior of human beings.

CC: Correct. And also the concept of progress is fundamental. Human beings are progressing from ignorance to enlightenment. Typically, enlightenment philosophy and religion. Traditional religion  is a part of the darkness of ignorance because it relies on invisible concepts like God which he thought were no longer applicable. He tried to build a religion of his own because he felt human beings needed some of it. But it was a so called scientific religion which means it is ideology.

RM: So basically, he is sort of beginning an atheistic thinking about human beings and society as far as the West is concerned. Of course, Bharat’s had this thinking for a long time, but in the Western, in the modern sense, who started this thought process?

CC: At least he organised it. There were several atheistic thinking before him. But in the beginning of the Industrial Revolution, which was also the beginning of systematic colonization of the world, he built this concept of the rational, empirical, scientific and technocratic society.

RM: So, the next big milestone is in the early 1800s and this is really the founding father of sociology.

CC: Auguste Comte, the secretary of Saint-Simon,  since he was a  youth, developed philosophy out of Saint-Simon’s ideas. But while Saint Simon was an aristocratic  dabbler and entrepreneur, Auguste Comte was a theoretical scientist in so much we could have in the 1830s, 40s, 50s.

Auguste  Comte coined the word sociology and he himself noticed that it was a bastard word as it had one part of it in Latin and the second half in Greek!  But he felt that these words were the supreme science. Because he felt that as human society and knowledge grow, people will move from physical sciences to social sciences. And sociology for him, was the culmination of human knowledge because  it included  all factors affecting human society:  History, biology, economics, philosophy and he, of course, was a materialist. He was an imperialist. He distrusted all spiritual investigations and experiences. Because he felt that there was nothing he could prove there. And he wanted to go only by tests and proofs. So, he developed sociology as the way not so much to study society but reform it.  And  he felt that like all pioneers in these days that you could be the ideal society only if you understood people scientifically. And people were to be understood like almost physical elements.

RM: So, it’s like somebody discovers a computer and  then reverse engineers and figure out which algorithm and how it works. So, his idea was like a machine model and if he can understand human beings then he can understand the  whole lot of them collectively and that  society and that’s how social sciences developed. From the very beginning, social sciences has been atheistic, materialistic, deterministic, reductionist . All of these, I think, would apply to the founding of the social science.

CC: Yes. What’s very important is that like Saint-Simon, like most people in his days, he believed above all, in progress. Progress meant that human beings have developed over the centuries from a near animal stage to the modern stage, which he felt was progressive and which he called in fact, positivism. So, he broke human history into three stages of evolution: the first being theological when people only thought of gods and spirits;  to the second stage, which you call metaphysical, which was very abstract and had theoretical laws principles, to the third stage, in which only what is scientifically proven is accepted, which means then that you move towards something completely rational, pragmatic and provable. 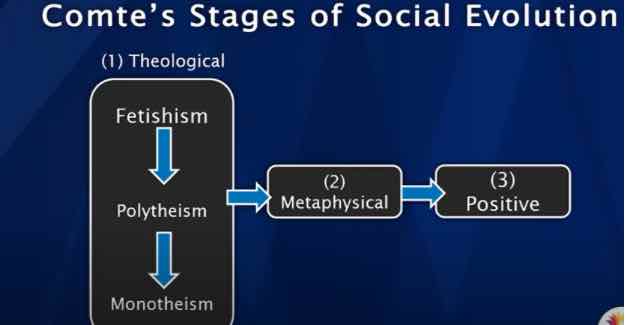 RM: This diagram you see on the left side (above), even religion according to him is classified in three stages and Christianity is a culmination.  So, fetishism when human beings are basically, you know fetished if you will, you know, what you would call primitive,  superstitious,  based on all kinds of irrationality.  This leads to another stage when there is polytheism, when they make some attempt to understand nature with multiplicity of intelligence, has multiple gods and he doesn’t think that that’s a good kind of a religion. It’s also a primitive religion. So, Hinduism will be classified as that in that case and then ultimately, this has to lead to an advancement towards Christianity. So,  basically, while all religions are to be rejected and superseded by metaphysics, and then metaphysics has to lead to the science of positivism, within the religions, some are far more  superior to others.

So, in a sense, if Christians go and convert Hindus from polytheism to Christianity, in his book,  it  would be an advancement. So this is very interesting. All religions are to be rejected but Christianity prepares for the next stage of evolution of society, which is metaphysics. And therefore, in that sense, there’s a hierarchy among the religions and Christianity is higher than the rest of it. The metaphysics is an interesting one where you start speculation. You have the transcendental  aspect but you haven’t totally gotten rid of the transcendent element. There is still a transcendent. It may not be God per se but there is and it is not so scientific and it is not so empirical because metaphysics talks about things that you cannot empirically, you know, decide and measure and verify so this also has to move to the third stage in this diagram which is positivism when you use nothing but modern scientific methods.

So, therefore, while a scientific person like me says, you know, this is very good. But later in this,  we will show you that Hinduism and Dharma have a whole different approach where science is not being  rejected. Science is not being bypassed but there is a spirituality which is consistent and compatible with science. So, this is one big issue—the  rejection of anything spiritual. The second big issue is that among the religions rejected, Hinduism is inferior; Christianity superior. So that’s an important…

CC: Western thinkers, especially prior to let’s say the 20th century, are a  product of Christian education. Therefore, they pretty much remain faithful to the concept of a Biblical evolution, which means that you transit from primitive polytheism to Judaism, which is revelation of the only one God and from there to Christianity. Therefore, even though they may reject Christianity because of what they see as a lot of essentially superstition, they still say that this is a need for  an advance on primitive civilizations, like polytheistic civilizations of Asia and Africa, which worshipped many gods and which have no concept of science.

Remember,  they had very little knowledge about the religions of Asia, but they were told that obviously, Christianity was by far the best and even though they didn’t accept Christianity, either, they still accepted some fundamental concept in a new way for example, the concept of Providence which they could never explain, you know, because Providence is supposed to be Divine Providence—what God wants for society or for you—and  they said well,  there is Providence because if there were no  Providence then how could you explain anything? I mean, why would there be  evolution? There must be some progress towards some ultimate good.

RM: But they didn’t want to believe in God.

CC: No.  Because God to them was a very uncomfortable notion, although eventually even Comte  ended up trying to build his own religion because they felt something must be there!  So, since I don’t accept Christianity, I must find something else.

RM: And it may be independent of Darwin

CC: May or maybe this is mixed up with Darwin prior to that. We need a way.

RM: Yeah, this is prior to Darwin, but there is already this idea of some  races and  some countries are more evolved than others.

CC: Yeah. You see, Darwin was the ultimate empiricist but he also went by observation. He was also a product of his day and age. He never said that human beings descended from apes ! He kept them out of that  and  that was added on later by other people!  But he said  that obviously species have been evolving from the more primitive to the more developed. So, he’s part of that whole mindset about evolution, which, of course, now you obviously  accept scientifically right? We are no longer believing that God just created all species one day. So we know that there is evolution. But its application to the social sphere can be problematic.