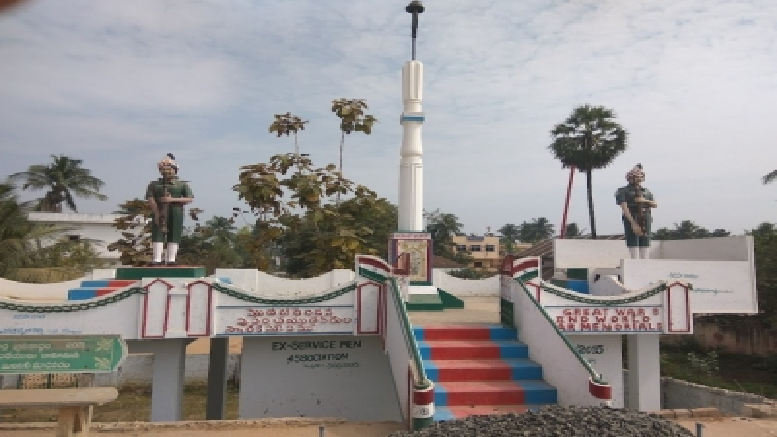 Saunter down the dusty lanes of this non-descript village in Andhra Pradesh, and every second man you bump into may well turn out to be a soldier – serving or retired. And if he isn’t one, and belongs to the village, he’s sure to be related to a soldier.

Welcome to Madhavaram, better known as Military Madhavaram, in West Godavari district of Andhra Pradesh. Every household in this village of 1,500 homes and 6,000 voters, has at least one male member serving in the armed forces.

It’s a proud martial tradition that straddles a few centuries, with its brave men seeing action in two world wars, and wars with Pakistan, including the one in 1971 that led to the liberation of East Pakistan and birth of Bangladesh.

Taking pride of place in the village, is a memorial to the valiant soldiers of Madhavaram, who laid down their lives in the course of the two World Wars.

According to P. Ramakrishna, Hon President of the Ex-servicemen’s association of Madhavaram, the village’s martial tradition began in the 17th century when they were employed as soldiers at a nearby garrison established by the Gajapati dynasty rulers. Ever since, sons have proudly followed in their fathers’ footsteps.

“Ask any kid here what he wants to do when he grows up, and he won’t say IAS or software or medicine. The invariable answer will be the defence forces. And they all prepare hard for that by studying, working on their physical fitness. On average, every year at least fifty of our youngsters enlist in one of the three defence wings,” Ramakrishna explains.

For Naib Subedar (Rtd) P. Krishna, memories of the face-off with Pakistan in the prelude to Bangladesh liberation, are still fresh. He was barely 20 years old, when he joined the Indian Army, as a sepoy in 1970. Initially posted in the Ladakh sector, in the 96 Mountain Regiment, he recalls being sent to Bengal before the Indian Army vanquished the Pakistan forces in the erstwhile East Pakistan. Krishna’s father and four uncles served in the erstwhile British Indian Army, and one of his uncle’s died in uniform in Burma.

Some of the other veterans of the village also recollect their memories of the ‘1971 war’ with a nostalgic look in their eye.

As the years pass by, the patriotic fervour burns bright in the residents of ‘Military’ Madhavaram. While more profitable avenues open up on the employment scenario, the villagers continue to line up at army recruitment centres – to do what they love, and do best – bear arms to for Mother India.