Volvo, an auto company penalised in past for emissions cheating, lectures Hindus on ‘pollution-free’ Diwali 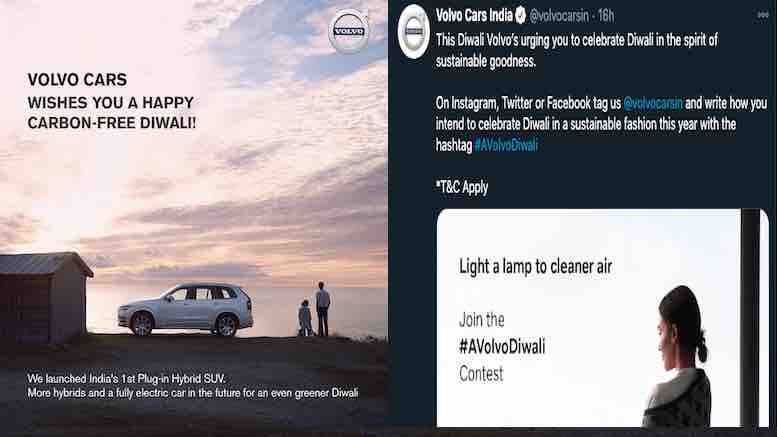 Volvo joined the lecture-Hindus-on-Hindu-festivals bandwagon when it recently asked Hindus to celebrate a ‘pollution-free’ Diwali.

The Swedish vehicle maker, now owned by China’s Zhejiang Geely Auto Group, was one of 7 heavy truck manufacturers who in 1998 paid the largest ever fine to date, US $83.4 million, for emissions cheating by programming their trucks to keep NOx (Nitrous Oxides) emissions low during the test cycle, and then disabling the controls and emitting up to three times the maximum during normal highway driving. Even more recently, Volvo was one among several car companies whose diesel vehicles were found to emit substantially higher levels of pollution when tested in more realistic driving tests. Independent German motoring organization ADAC conducted a study in 2015 along with the International Council on Clean Transport (ICCT). The emission by Volvo S60, among others, was found to be more than 10 times the permissible limits.

The entire scandal, which came to be known as the ‘Dieselgate’ emissions scandal, sparked when German car maker Volkswagen was caught using illegal software in millions of cars to cheat pollution tests.

Earlier this year the luxury car maker, whose cars fall in the whopping price range of Rs. 39 lakhs to 1.31 crore in Bharat, was again in hot water when researchers at the environmentalist group DUH claimed to have discovered an illegal measuring device or defeat device in the Volvo model XC60. So-called defeat devices manage car engines to allow higher emissions out on the road than under test conditions. Volvo denied the claims.

So it is quite sanctimonious of a company with such questionable ethics towards environmental pollution to lecture Hindus about “pollution-free” Diwali.

Unlike Diwali which is an annual affair, their cars are on the road throughout the year thereby causing more harm to the environment than all the crackers burst by Hindus put together. Hindu festivals have become the favorite punching bags of activists preaching about saving the environment while traveling in fuel-guzzling vehicles and sipping coffee in their air-conditioned offices, both of which are way more polluting.

Guilt-tripping Hindus is the hobby of activists and their left-liberal Lutyens cabal. While this lot always has advice for Hindus right from waterless Holi to crackerless Diwali, they seem to have their tongues in knots when goats are slaughtered for Eid (yes, it harmful to the environment) or trees are cut down for Christmas and crackers are burst during the new year.

As it is, there is a two-hour window on bursting crackers during Deepawali but the cabal won’t sleep till they kill all the fun of the festival. This holier than thou attitude and the tendency to talk down to Hindus is, however, now being rightly challenged by Hindus who are not ready to bow down to those who have no moral right to lecture.

Here are some of the responses to Volvo’s sanctimonious tweet.

BTW, I intend to spend at least Rs. 2000 on crackers and burst them on Diwali night. I am urging friends and relatives to do the same.

Again!! A message to all those corporates who come out of the woodwork once a year to preach Hindus on how to celebrate their festivals… Stop this preachy ad SHIT! DO NOT PONTIFICATE TO US ON OUR FESTIVALS! u wanna sell ur pdcts? do that, don't preach!

The company that wants Hindus to celebrate a “clean air” Diwali wants people to have a blast with New Year fireworks. All the environmentalism gets shoved down the throats of only Hindus, the only reason for this being that Hindus have tolerated and even given in to this cabal.

During New Year During Diwali pic.twitter.com/PZqs1N0qQR

Companies such as Volvo, Tanishq, and others along with the Lutyens liberal cabal as well as activists would do well to clean up their own acts rather than targeting Hindu festivals. And here is something for Hindus who fall in the trap of these hypocrites.

Wake Up HINDUS!
Don't let vested interests guilt you into changing our celebrations. The targets are not the rituals but DHARMA itself.

Watch this 2min film to realize the true nature of attacks on Hinduism on regular basis.#SaveHinduFestivals pic.twitter.com/ct3DBAmOQY

This video captures the reality perfectly and Hindus would do well to take a cue from it and save our culture.