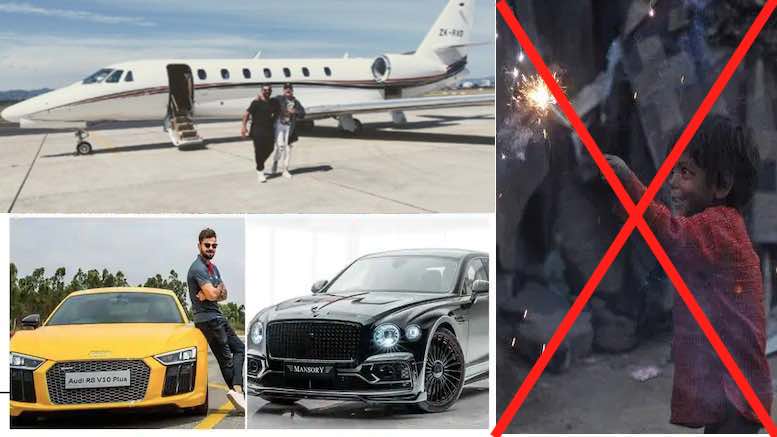 Indian cricket team captain Virat Kohli issued a short Diwali ‘greeting’ video wherein, like many page-3 celebrities, he was found stressing on the ‘do not burst crackers, save environment’ message that is routinely trotted out these days before Diwali and other Hindu festivals.

Why do they always have issue with Hindu festivals whether it's Diwali or Holi pic.twitter.com/GdKKCc7C6Q

Notwithstanding the obvious difference between his greetings on Diwali versus greetings on non-Hindu festivals which are devoid of any social cause sermons, many netizens were quick to turn the spotlight on Kohli’s luxurious, resource guzzling lifestyle which includes a bevy of luxury cars and even a private jet estimated to cost Rs. 125 crore.

Kohli is reported to be a car connoisseur with have over half a dozen Audi cars – Audi S5, RS 5, Q7, Q8, A8 L, R8 LMX, and R8 V10 Plus- in his garage, and high-end British supes like a Bentely Continental GT which runs on a 4.0-litre V8 petrol engine, a Bentley Flying Spur, and a Range Rover Vogue with a 4.4-litre V8 diesel engine. We are no auto experts but ‘kitna deti hai’ (how much mileage does the car give) is not a question one would imagine Kohli asked while buying these gas guzzlers.

Incidentally, Kohli was fined Rs 500 by Gurugram municipal authorities last year when at the time of a severe heat wave causing acute water shortage, his domestic helps were found wasting 1000s of litres of drinking water to wash his bevy of luxury cars.

Deepawali is the biggest festival in the Hindu calendar which people celebrate by, among other things, bursting crackers for 1-2 days. Bursting crackers and other festivities associated with Diwali are some of the fondest childhood memories for most Hindus. The Sivakasi cracker industry which provides livelihood to lakhs of poor Hindus hinges on Diwali. So to deny this simple joy to Hindus far less privileged than him, while he himself chooses to indulge in his own expensive and polluting passions, certainly reeks of hypocrisy.

Recently, we also saw cricketer Hardik Pandya ‘take the knee’ in support of the BLM (Black Live Matters) movement, probably at the urging of West Indian players in the league like Jason Holder and Keiron Pollard. But our cricketers have not once spoken up for the horrible persecution faced by their fellow Hindus much closer to home – in Pakistan and Bangladesh to be precise. We have in the past requested Virat Kohli to speak up over the abduction, conversion and sexual slavery of minor Hindu girls in Pakistan, similar to how Harbhajan Singh spoke up when the daughter of a Sikh Granthi was abducted in Pakistan, but to no avail.

We hope the message goes across to our cricketers, Bollywood and other celebrities that their sermons to Hindus are fast growing trite, as it only exposes their hollowness and ignorance of the real issues affecting ordinary Hindus who give them their fame & wealth.