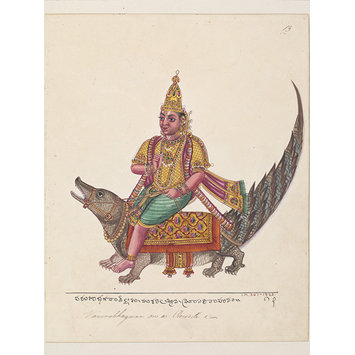 The Dravidianists from Tamil Nadu often claim that the Dravidians, especially the Tamils (Tamil is earliest attested Dravidian language) pristinely did not worship Vedic Gods and practiced their own native Dravidian religion and culture. This argument is also picked up by leftists as well as Christian missionaries to prove the non Hindu past of ancient Tamil and how ‘Aryans invaders’ imposed the worship of Vedic Hindu Gods among Tamils by destroying their native culture.

In this post we shall highlight the popularity of the worship of Vedic God Varuna among ancient Tamils, debunking the Dravidianist claims.

From the archaeological, epigraphical and textual evidences, it is clear that the worship of Varuna was really popular among the ancient Tamils. For example a Sangam age gold ring discovered from Coimbatore in Tamil Nadu depicts the legendary beast Makara:

Apart from this, Sangam age Tamil Pandyan kings had issues coins with images of Makara. An example given below:

This legendary aquatic chimeric beast Makara is vahana(mount) of God Varuna, the Vedic God of waters.

Makara was also at the same time popular in the art of northern ‘Aryan’ Bharat as well. See one example here:

This indicates that the ancient Tamils knew of Makara and worshiped Varuna. In fact Tolkappiyam, the earliest Tamil grammatical work available mentions  Varuna by his Sanskrit name. He is mentioned as the God of coastal regions:

Apart from this an early Tamil Brahmi (the earliest Tamil script)  inscription from ancient site of Kodumanal mentions the name Varuni, in relation to Varuna. This inscription not only proves that ancient Tamils knew of Varuna, but also that the the earliest Tamil writing system was also used to write ‘Aryan’ languages (i.e Sanskrit, Prakrit etc) terms along with Tamil in ancient Tamil Nadu.