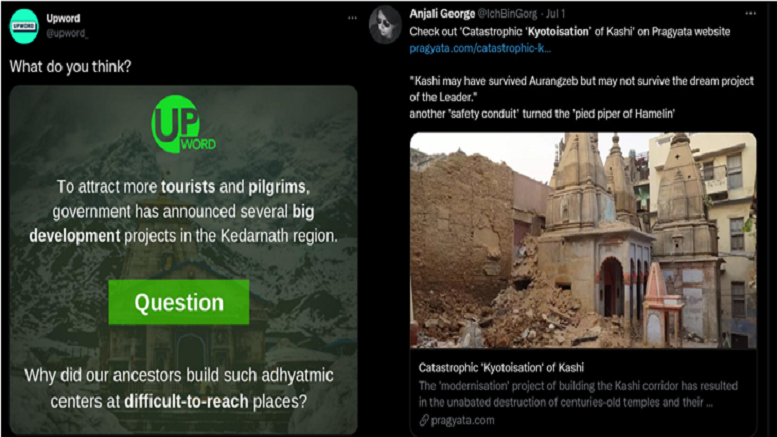 “Augmenting Indra, we urge the waters to make the world Arya (noble).”

Of late, a phenomenon of online Hindu activism has emerged where some factions proudly proclaim themselves to be “anti-development” or “trad”, while some espouse some form of decoloniality. They launch into bitter criticisms of any form of development or growth and even question the necessity of industrial civilisation citing the environment as one of the reasons. The danger of this way of thinking is that, if taken to its logical conclusion, it will drag any country down into deindustrialization and towards an agrarian neo-feudal order.

While conservation of forests and animal species alongside a concern for environmental sustenance is an important part of the Hindu tradition, it does not take priority over the survival of the civilisation. Concern for nature must be balanced with the prosperity, security, and well-being of the people.

A “civilisational state” cannot be built using stone-age technology in some form of agrarian economy. Also, the contemporary environmental movement has unfortunately become a political attack force that focuses on attacking political enemies in the name of the environment.

The main opponents for a rebirth of Hindu civilisation are the Islamic, the Chinese, and the Western globalist civilisations. While the West is already industrially advanced, the Islamists and China are pursuing space and nuclear programs, while aggressively pursuing research in industrial technologies.

Both the UAE and China have advanced space programs with the objectives of exploring Mars and the Moon. How long a “decolonized”, deindustrialized Bharat will last against advanced opponents is hardly anyone’s guess.

The sad reality is that the result of the “trad” way of thinking most likely ends in such a Hindu civilisational state becoming a slave state of the Western globalists, or the Islamic or the Chinese civilisations. Instead, a truly revived Hindu civilisation must reject both the passive idea of Hindu tradition as espoused by the “trads” and the extreme notion of decoloniality and instead base itself on the ancient Hindu tradition of innovative and progressive thinking.

Innovative thinking is an integral part of Hindu tradition

So-called “trads” who oppose technological progress & development are in truth opposed to a tradition which includes innovators like Sri Krishna, Kanada, Aryabhata, Kautilya and innumerable others, who came up with radical ideas that many times challenged convention.

Their way of thinking was in many cases forms of normative inversion. These heroes helped their contemporaries and future generations to explore and understand the world around them and ultimately helped dharma and the Hindu civilisation to survive and grow.

As Brajendranath Seal and others have demonstrated, ancient Hindu thinkers had come up with original ideas in chemistry, biology, mathematics, astronomy & many other fields. The ancient Hindus even considered consciousness as an important aspect of investigation. Thereby, they had rejected the limitations imposed by the modern theories like Cartesian dualism which has led the West into a materialist dead-end.

As another example, Bhagavan Shri Krishna Himself offered a unique, self-critical, and internalized path of evolution and change within the tradition of Sanatana Dharma in the Bhagavad Gita.

In Bhagavad Gita 2.43, Shri Krishna critiques those who are obsessed with the results of the Vedic mantras and sacrifices which ultimately cloud the mind of the performers with the promise of heaven which is a lesser attainment when compared to moksha (liberation).

In Bhagavad Gita 7.21-24, Shri Krishna illuminates how he strengthens the faith of the devotees of the individual devas and grants the fruits of worship while suggesting that those who instead worship and strive for the Paramatma (Supreme Reality) ultimately achieve moksha.

In Bhagavad Gita 18.66, Shri Krishna advises those devotees who have attained the necessary prerequisites to abandon all rites and duties and to take refuge in the Paramatma alone.

In the Srimad Bhagavatam 10.24, Sri Krishna further displayed radical ways of thought when he encouraged his fellow residents of Vraja to begin worshipping the cows, the brahmins, and the Govardhan hill from whom they received material benefits instead of performing sacrifices to Indra.

Later, during the Mahabharata war, Sri Krishna also helped the Pandavas towards victory using unconventional & innovative means such as:

These are just a few examples where Sri Krishna went against the conventional ways of thinking. Krishna thus performed many acts of normative inversion with his innovative thinking and achieved ultimate victory for the cause of Dharma.

Coming to decoloniality, it appears on the surface as a nice idea that can be used to identify and rectify the crimes committed by the Islamic and British colonialists. It is unquestionable that the Islamic and European colonialists brutally ravaged Hindu civilisation. Millions of Hindus fell as victims of colonialism. Hindus are still coming to terms with how to fully heal the civilisational trauma caused by the two colonialisms.

At the same time, we must not lose sight of the fact that conquest and colonisation have been a reality throughout all of human history. In ancient times, the Greeks, the Romans, and the Persians conquered and colonised each other many times.

Further, there is nothing wrong with objectively studying or using an enemy’s strengths and tactics. Instead, just showing blind hatred fuelled by a “decolonial” narrative can become counter-productive. When examined in detail, it can be seen that the idea of decoloniality in its extreme form can be a destructive idea.

One major issue with the theory of decoloniality is that it assumes that all “indigenous” cultures are somehow precious and deserve protection for their own sakes. Decoloniality proclaims that indigenous peoples need to question the “epistemic” dominance of so-called colonial knowledge. However, such an idea assumes that every culture is universally valid for all time.

A blind focus on opposing epistemic hegemony just leads to nihilism. For example, from a decolonial perspective, the Deobandi school of Islam which gave rise to the Taliban must be considered “indigenous” since it originated in Bharat. But, from a dharmic lens, not all cultures are the same.

Hindu dharma has its own ontology, epistemology, and aesthetics. Only those cultures which can live in harmony with dharmic values are worth supporting. Thus, decoloniality could theoretically be applied against Hindu civilisation which values truth over falsehood as shown by the Upanishadic statement of “satyameva jayate nānṛtaṃ”.

The modern concepts of hard power and soft power roughly correspond to the traditional Hindu concepts of the Kshatra and the Brahma which have been the two aspects of society which strove together to establish long-lasting Hindu empires. In response to the challenge of modernity, a new Brahma–Kshatra elite must be identified and groomed on a meritocratic basis instead of on a hereditary basis. The aim must be to build new schools of thought in all spheres of human knowledge while upholding the ancient universal Hindu values.

In conclusion, both the “trad” ideology and decoloniality taken to their logical extremes eventually lead to a dead-end which involves abandoning modern technological civilisation citing one or the other excuse. This is a nightmare scenario which can be catastrophic for civilisation. Instead, the ancient tradition of innovative thinking in all spheres of human knowledge must be revived with the goals of:

This could be the best approach to address the damage caused by the colonialists and, if pursued diligently, will spawn a new renaissance of Hindu civilisation.