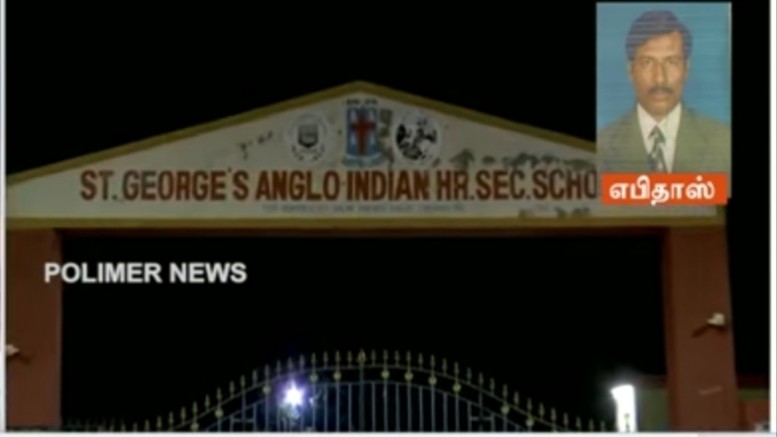 While the mudslinging on Hindu run educational institutions is continuing, attempts to hush up sexual abuse in a Christian school in Chennai are being made. A politician of DMK’s ally Viduthalai Chiruthaigal Party (VCK) has been accused of threatening the victim’s lawyer in support of the Christian Physical Education teacher.

Recently social media was abuzz with many complaints of sexual harassment and abuse in renowned Hindu institutions like Padma Seshadri Bala Bhavan, Maharishi Vidya Mandir, etc. Following this, instead of talking about punishment and the flaws in recruitment policy, Hindu run institutions were accused of practicing Brahminism. The State Commission for Protection of Child Rights, took the matter in hands and started investigating complaints from current students and alumni of the school’s.

SCPCR also started investigating complaints from January, one of which was on a PET teacher of St.George Anglo Indian school. In this regard SCPCR summoned the school management and Ebi Das along with the hostel warden who is another accused. School management replied that they couldn’t appear on May 7 due to Covid-19 related difficulties. The commission sent another summon asking them to appear for investigation on June 15th.

In the meanwhile Ebi Das has approached a functionary of VCK, Tamil Kathir, to do katta panchayat (similar to Khap panchayat but only by politicians to arm twist victims and earn money from perpetrators) in his stead. VCK claims to be Dalit party and is an ally of DMK. Tamil Kathir called up the victim’s lawyer Sridhar, who had filed complaints with both SCPCR and the police, and asked him to withdraw them.

He allegedly said that Ebi Das’s hands unintentionally touched (the private parts of) the victim while he was teaching her how to play tennis. He also said that Ebi Das is his cousin and threatened the lawyer to withdraw the case. Coming back to the case, the victim had given a written complaint to the school’s correspondent Francis in 2017. Francis is said to have obtained an apology letter from Ebi Das, suspended him for 15 days and then allowed him to continue working in the same school. He also transferred the victim to another school.

The victim has filed a complaint on Francis as well and seeked to book him and Ebi Das under POCSO. Oddly neither this case nor the gory details found their way to the media while the complaints on Hindu run institutions were run through prime time debates. In another case of athletic coach Nagarajan who also worked for the same school and St.Joseph’s Sports Academy, the names of neither the school nor the academy were mentioned by the media. Media and so-called social activists continue to turn blind eye to the predatory behaviour of Christian teachers and institutions letting children suffer in silence.