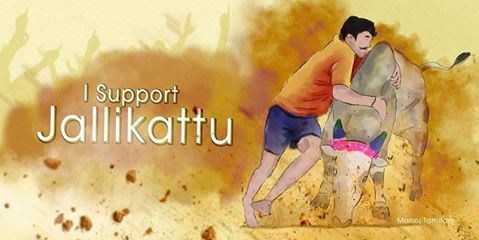 Jallikkattu has been in the news – and is proving to be a sharp dividing factor between people. We will look into the cultural continuity of Jallikkattu, its purpose, its position in the rural economy and agriculture, and the problems associated. I am not going into the power play behind the NGO / PIL / Supreme Court nexus that is hell bent on stopping this game – though we will see briefly how it ties up with the continuing colonization of Bharat.

First things First: Jallikkattu (சல்லிக்கட்டு) is NOT bull fighting. “Bull Fighting” as a term creates a negative connotation where successive players try and kill the bull. In Jallikkattu, the bull is not killed. In fact, the multitude of men in the play do not even fight the bull. Henceforth, we will not use the term bullfight to describe this sport.

There is a strong historic reason to not call it bull fighting.  The technically correct term for this sport in tamizh is ஏறு தழுவல் – “Embracing (தழுவல்) the Bull (ஏறு)“.  What this name tells us, is that historically and culturally, the sport is NOT about hurting the bull, but about one’s ability to play with a big animal. In fact, the term “embracing the bull” for this sport has been used in kalithogai (கலித்தொகை – see the link; it is an excellent blog if you know Tamizh) – compiled in the 6th – 7th Century CE. We are talking about a 1500 year old continuous cultural process.

In the pre-modern times, such an ability represented physical / mental strength and bravery, all of which were considered necessary qualities in a man. One might ask – is such a show of “masculinity” necessary in today’s world? In my mind, this question is no different from asking whether Olympics sports is necessary? Or the Tour de France? Or bungee jumping or paragliding or rock climbing! Is Jallikkattu more dangerous to human body than any of the above mentioned activities?

People are however more concerned (or claim to be so) about the bull itself. “It is cruelty towards the animal”, they claim. The claim is ridiculous.

A fully grown bull weighs anywhere near half a ton. Let me repeat – this is a 500kilogram animal. And this virile animal is pumped with testosterone. To give you a comparison: few humans together can barely control a 30Kg Doberman that has decided to attack someone. Let us not even talk about a 40Kg Rottweiler that wants to run free. Now, revisit the number for a Kangeyam bull – this is a 500Kg bull. If you still can’t imagine how big and strong a Bull is, think this: a fully grown male Tiger is just about half the weight of a Kangeyam bull.

Such a huge animal goes up against puny Humans (60 – 70kgs). Unless you carry a weapon of some sort – a huge stick, a Knife / sickle / gun, humans are not capable of hurting this animal. And these things are explicitly prohibited in the arena.

So, if it is not bull fighting – and if it is not hurting the animal, what exactly goes on? Here is a low down: the bull is released from a pen, and it is allowed to run a certain distance, on a path that is fenced on both sides. On the horns of this bull, there will be a small bag of prize money that is attached. Any man who manages to hang on (embrace it) to the bull for long enough, gets the prize. That by itself is the lesser part of the story: the bigger part of the story is the exposure of the Bull and its virility to a wider audience. The bull that remains untamed, fetches a better price in the mating market. A virile strong untamable bull – what better mate can one choose for a cow? Now – even if the offspring are castrated to become Oxen, the father’s bloodline ensures they are strong enough for field work. As you can see – this is matchmaking market for the bulls.

Not only is it good advertisement for the bulls, it is also biologically necessary. Higher animals such as mammals play. They need play. Dog owners know this instinctively: a bored dog gets destructive. And they enjoy rough play. There is a fine line between rough play and hurting the dog – and all dog owners instinctively know the line. For the bulls, Jallikkattu is their rough play. People those who play jallikkattu, for most part, know where that line between rough play and hurt is – and they respect it (check back the point about it being a half-a-ton animal): the animal knows how to command its respect (try horsing around a fully grown cow to know what I mean).

There is a sideline to this story: a concept called the temple bull (நேர்ந்து விட்ட கா ளை). Once in a while, a strong young uncastrated calf is donated to the village / town temple. This temple bull has a free run across the village. It can’t be touched (it belongs to the temple) and it always free ranges. Stories of temple bulls running amok in fields used to be common in Tamizh Nadu. The temple bull is the first one to enter the arena – it marks the beginning of the sport. Being an uncontrolled free ranging animal, the temple bull will be the most challenging animal. And the temple bull also is a way for impregnating cows for low cost in the villages.

In summary: Jallikkattu doesn’t hurt the bulls. It is less dangerous to human life and limb than driving in a city. It serves a biological imperative for the bull – by allowing it much needed rough play and the testosterone rush. It helps the farmers in surrounding villages identify the strongest and best bull for mating with their cows. Finally, it teaches young rural men the ability to not just respect the animal, but also the mental strength to rule over it.

Now for the negatives: There are genuine concerns about certain animal abuses during Jallikkattu. Some are listed below:

Of these, leave out (3), and the rest of them are genuine concerns. In fact, many of the Jallikkattu organizers themselves are strictly against these activities, and there is a ecosystem that tries to correct itself.  What they need is help with regulation – not a ban. Help them with vigilance. Help them with best practices from other countries.

On the other hand, if we ban it – these bulls take a lot of maintenance, and will soon be sent to slaughter. That would, in due course of time, mean the complete eradication of an entire gene pool.

After all this – only one question remains. Why the ban, and who benefits? When a native bull breed dies off, some thing else fills up the supply gap. That something is often a commercial breed, whose sperm bank is controlled by a international corporation. When you remove an acclimatized draught breed from survival, and supplant the gap with an imported breed, your costs of maintenance increase – cost of farming increases.

So, let me ask this question again to my readers: qui bono?

(By – @SirBullyMammoth…This article first appeared on this blog, and is being reproduced with the author’s consent)