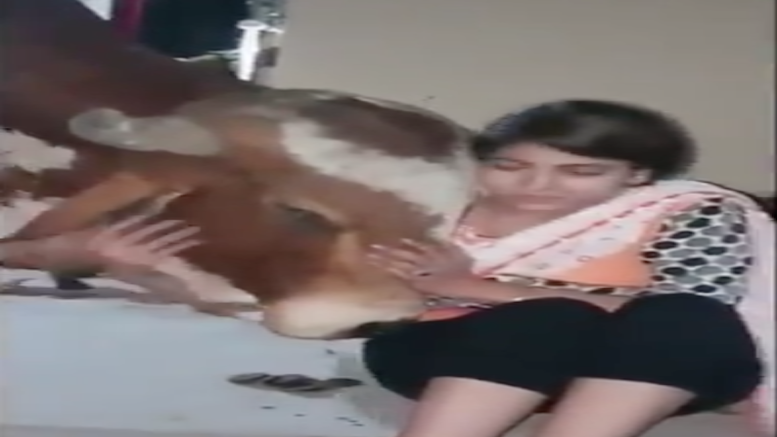 Many non-Hindus, and for that matter even urban Hindus, wonder about the bond between Bharat and cows. To Westernized and non-Hindu eyes, this ‘obsession’ with an animal that they look upon as just a provider of milk & meat looks strange.

This short video should answer such questions, much more than any words can –

Does the Semitic cults understand this language? pic.twitter.com/67r5uURNCZ

The woman in the video above is feeding a stray cow, while asking “Why didn’t you come for 2 days? I am angry with you.” After feeding the cow, she pretends to be upset and goes and sits some distance away. The cow walks up to her and nuzzles her, as if to say, ‘please don’t be upset..I am sorry.’ The woman moves further away, and the cow follows her and nudges her again.

This is the bond every rural/semi-urban Hindu family shares with the cow – it is just like any other family member and incredibly gentle, empathetic and sensitive to human emotions. Even a stray cow or calf in villages is often adopted by the entire village and houses prepare separate rotis/food for such cows.

Apart from the cow, the closest any other animal could come in terms of sharing a bond with humans is the dog – how would an urban family feel if their pet dog were stolen from their house and taken away for slaughter?

While the cow is universally adored by practising Hindus, we share a special bond with several other animals too – such as the monkey which reminds us of Sri Hanuman, or the chinkara and blackbuck considered a sacred by the Bishnois. Respect for animal life and all of nature has been a central theme in Hindu life.

It’s a pity that today, many have drifted away from their roots and come to regard animals and nature as commodities subservient to humans. But the good news is that even the West seems to be awakening to the horror of the meat industry – recently, Oscar winnerJoaquin Phoenix rescued a cow and her calf from a slaughterhouse in Los Angeles and moved them to an animal shelter, aka gaushala.