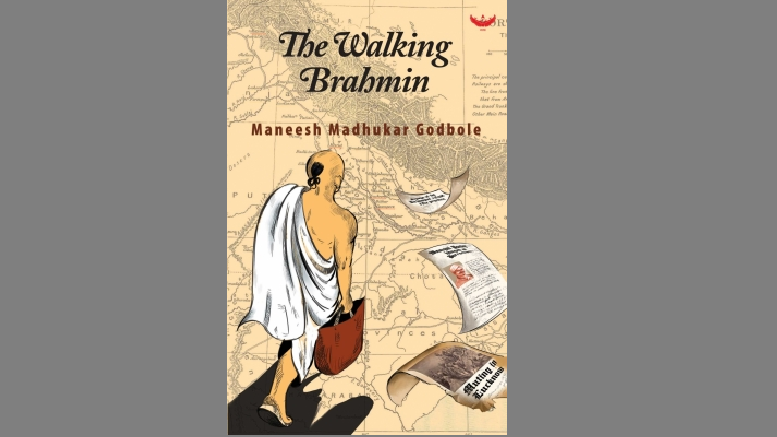 Drawn from the details provided by a Brahmin-turned-amateur-historian, this is a real story that follows two learned men as they traverse Bharat during the 1857 uprising on foot, unearthing history from a new vantage point

As the First War of Independence raged, a Brahmin from Maharashtra, Vishnubhat Godse, on a pilgrimage found himself caught right in the middle of the action. He, along with his uncle Rambhat, went through a series of adventures, including barely escaping hanging.

Upon his return home, Godse wrote it all down in Marathi so that his forthcoming generations could have an idea of how things were during that tumultuous period. “The Walking Brahmin” by Maneesh Madhukar Godbole retells that journey, which is a rare eyewitness account from a common Bharatiya’s point-of-view.

Published by Garuda Prakashan decades after the original manuscript, it puts all pieces of the story together with maps and photographs and offers a unique insight into what really happened during the War of 1857.

This tale starts in 1857, as the protagonist duo starts on a ‘teertha yatra’ from Varsai, a small Maharashtrian village, and walk smack in the middle of the mutinous upheaval of 1857. Having the misfortune of being at the wrong place at the wrong time, they were caught in the crossfire between the loyalist Indian troops and the British.

Narrativising historical incidents through an Indian lens, such as the fall of Jhansi, they survived the aftermath of British savagery, were robbed of all their belongings multiple times, and even managed to avoid getting hanged twice. Being on the road for over two years, they finally returned to Varsai, which was where Vishnubhat penned down his adventure for his descendants.

“His original manuscript, which ran into 297 pages, comprised two notebooks and twenty-two individual pages. It was eventually published as a Marathi book in 1907, a few years after Vishnubhat’s death. This is probably the only known instance of a document that talks about 1857 from an Indian perspective,” the Pune-based Godbole said.

“Not only does it give us the story from the perspective of the vanquished, but it is also more reliable as it is a first-hand account of experiences and not based merely on hearsay. Thus, the value of this book, in the annals of history, is quite priceless.

“Vishnubhat’s book offered me a unique and authentic insight on how our ancestors lived. What they believed in, the social structure of those times, the hardships, the never-give-up attitude, their fortitude, their beliefs and their ability to even put their lives at risk to fulfill their responsibility,” added Godbole, who learnt about this lesser-known story when he was busy writing blogs related to his travel to northeast India and subsequent research.

Sharing his insights on the book, Uday S. Kulkarni, historian and author of “The Extraordinary Epoch of Nanasaheb Peshwa”, said that it “gives us a graphic account of the cruelty perpetrated by British forces in cities such as Jhansi, where troops looted and massacred the populace in retaliation for the stiff resistance the city offered the attacking force. It’s a short book, which brings alive the times, the dangers, the smell of war and of death…a first-rate historical account of those turbulent times.”

‘Banaras is endless, one book is not enough to capture it all’