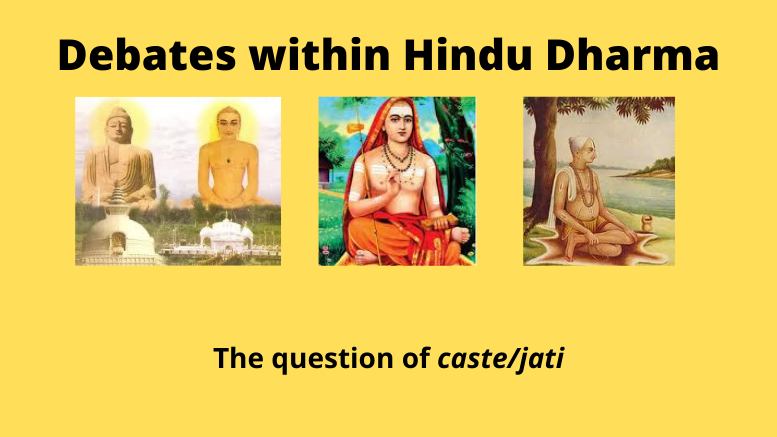 Discussion and dialogue has been the hallmark of Hindu Dharma. There have always existed different perspectives regarding social, cultural and religious issues. Indeed, the word ‘religion’ does not have the capacity and range to describe Hindu Dharma. Dharma itself has been subject to different interpretations by different thinkers. In stark contrast with Europe and Middle East, the differences have largely been settled by debate.

It has be kept in mind that these debates within Hindu Dharma led to a synthesis of religious and social ideas and no ideology was defeated in a real sense. All sides had the intellectual honesty to change their position when confronted with facts and arguments. The current debate between traditionalists/trads and reformers is a continuation of the same tradition.

Some historical debates within Hindu Dharma

First, let us take a bird’s eye view of major debates within Hindu Dharma. These debates have continued throughout the last 3000 years and have impacted Hindu Dharma in a profound manner. These debates ran concurrently and indeed many of these continue to the present time.

The debate on the authority of Vedas arose about 2500 years ago. Great sages and philosophers argued that Vedas/Shruti/Shabda were not the only source of knowledge and humans could also obtain valid knowledge from other sources. This can also be formulated as a struggle between agamas and nigama sastras. Buddhism and Jainism are the living proof of the vitality of that ideology. However, despite the debate, they achieved a broad consensus on certain ideas like karma, rebirth, yoga and role of knowledge. Deities of Buddhism and Jainism were incorporated in Hindu pantheon and Hindu deities in Jain and Buddhist pantheon and of course, there were exceptions like Carvaka and Ajivkas, but these ideologies went extinct a long time ago.

Another debate arose regarding the utility of rituals. Some said, rituals (Karmakand) are the bedrock of Hindu Dharma. Others differed and focused more on acquisition of adhyatmik knowledge through Bhakti. It were the great saint-scholars like Adi Shankaracharya, Ramanujacharya and Madhwacharya who resolved the debate through various methods and gave birth to current form of Hindu Dharma. They were also opposed fiercely in their time by traditionalists, e.g. Shankaracharya was called Prachhanna Bauddh (crypto-Buddhist) by other Brahmins, who claimed to follow tradition!

Language was another area of debate within Hindu Dharma. Initially, Sanskrit was the language used exclusively for religious purposes. Starting from Tamil Nadu, Bhakti movement used Tamil language for its propagation. Influenced by Ramanuja, Bhakti movement slowly made inroads in northern part of Bharat and soon religious literature in Braj, Awadhi and other languages became immensely popular. But it was not easy. Even the Ramcharitmanas of Tulsidas was not accepted by traditionalist Brahmins until Madhusudan Saraswati himself certified it! The reason was that the book was in Awadhi and not Sanskrit. Today, Ramcharitmanas is one of the most read books in the whole of north Bharat, while Ramayana of Valmiki is read only by scholars of Sanskrit. Although Sanskrit retains an important role in religion, local languages are extensively used for daily puja and arti.

Traditionalists vs Reformists : the debate today

Those active on social media would have been aware of the current debate going on between traditionalists (trads) and reformists, specially on the issue of caste. It would be instructive to know the arguments of both sides in this debate.

Before the debate however, let us understand the key terms of this debate. The two key terms are Jati and Varna. Among these, varna is the older concept and has been found even in the Vedas. This refers to the four-fold division of society in Brahmin, Kshatriya, Vaishya and Shudra along with their respective duties. It is to be noted that this system was always flexible enough to admit new members in the varna. Thus King Vishvamitra famously became a Brahmin after performing penances. The story of  Satyakam Jabal is still more interesting. He was of uncertain parentage, and when he went to a gurukul, he was asked about his father. He truthfully said that he and his mother did not know who his father was. He was accepted as a Brahmin on the basis of his honesty and became a great Rishi and Jabalopnishad is named after him. In recent times, the Maratha ruling families of Holkar and Scindia are examples of backward castes rising to become ruling Kshatriyas.

The origin of jati is much more recent. Craftsmen specializing in a certain craft tended to live together and form a guild, called shreni in Sanskrit and Indic languages. These shrenis were economic units which trained the young members, bargained for inputs and chartered ships for exporting goods etc. These also functioned as banks and as civil courts. With time, these transformed into endogamous groups with closely-knit social structure and became jatis. Their expertise and skill were instrumental in making India a big economic power in pre-modern times. It must be noted that jati was determined by birth even today is a social reality.

It is pertinent to mention here that even in today’s times certain professions and their associations like that of doctors or lawyers also tend to have their own social circles and generally children inherit the practice of parents in the same profession.

Now that the cobwebs of confusion regarding the terms varna and jati are cleared, let us focus on the arguments in the debate. The traditionalists hold the position that :-

This position is quite inflexible and trads claim it to be based on the shastras. It must be noted that even they do not want to be known as ‘casteist’ and often claim that all jatis are ‘equal but different’. There are many who are opposed to this line of thinking. This includes people supporting the RSS, VHP and other broad-based Hindu organisations. They say that :-

Dharma has always been defined in indefinite terms. Bhishma says in Mahabharata “Dharma is subtle”, and even the wisest and well-intentioned persons can make a mistake in matters of Dharma. Hindu Samaj has been flexible enough to respond to changing times. It admitted the fourth varna after only three were deemed insufficient, it permitted people to change varna and admitted new peoples in its fold. So, in today’s changing times, it cannot remain ossified in systems of the past.

The Traditionalist vs Reformer battle in Hindu Dharma is the continuation of an old tradition. It is certain to attract the attention of millions and impact their views. The goal of Hindu unity should not be forgotten in this whole debate, which can only come if all Hindus get equal social respect irrespective of their jati. If it can happen in an “equal but different” paradigm or does it require “equality in all matters”, remains to be seen.