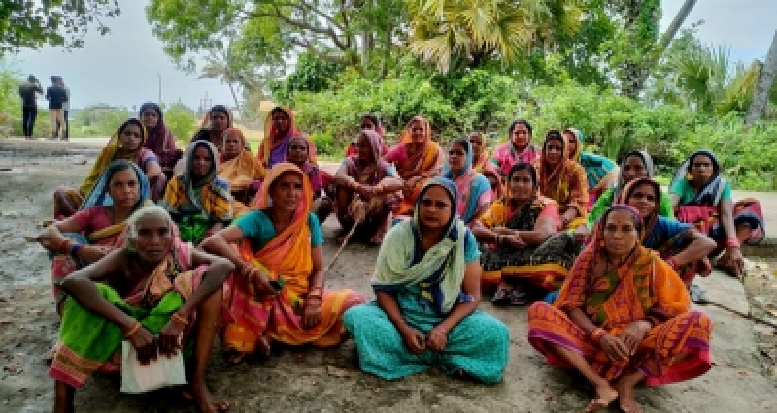 Sitting in her house in the nondescript Gundalba village in Odisha’s Puri district, Charulata Biswal (55) speaks with poetic creativity. A noted environmental crusader, she has received numerous accolades, but the awards and recognitions have not made her shun the simplicity. Her testimonials reflect the culture and aesthetics of her work, more than scientific references.

“The cool breeze under the shade of the tree on a hot summer afternoon, the soft ruffling of leaves as wind brushes past, the melodious chirping of the birds nested in the tree… These are the little joys in life that only a tree can provide,” she articulates her emotions in Odia, in a near melodic cadence.

For over two decades now, Charulata and a group of 75 women from adjacent villages have been guarding a casuarina forest in Gundalba from timber mafia. Additionally, they protect the mangroves around the coastal belt that lies in close proximity to the village, which comes under Astaranga block.

The Super Cyclone and its aftermath

The devastating Super Cyclone of October 1999, which swept away several villages along Odisha’s coast, was their wake-up call. Though inundated, Gundalba, which lies half a kilometre from Astaranga beach, was not cut off. “The mangroves saved us. They reduced the pace of the waves entering our village. If not for these trees, our village could have been washed away,” says Charulata.

Two years later, under the aegis of Pir Jahania Van Surakhya Samiti – it was named after the spiritual shrine situated near the village – women from each household of Gundalba joined the green drive. Their counterparts from other villages joined in gradually. The areas of conservation were demarcated for the convenience of the participant villages.

Women in Gundalba use the thengapalli method to protect the casuarina forest. In local parlance, thenga means a stick and palli means turn. So, armed with sticks a group of 10 to 12 women stay on guard throughout the day.

Each week, a group takes up the task of patrolling the woods. They watch out for anyone trying to cut a tree. They work in two shifts: from 8 a.m. to noon and post-lunch to sunset.

“Sometimes, we also venture out in the dark, if we get information about anyone sneaking into the forest. Those in our village follow the rules, but outsiders cause trouble at times,” says a woman associated with the group.

Since the women also have households to look after, their duty hours have to be managed efficiently.

“In a household where only one member is female, she completes all daily chores before venturing into the forest. If the family has more women, we place them in different groups so that at least one of them is present in the house to manage chores,” says Mehjabeen Nisa, a member of the group.

If any intruder is caught, he is usually let off with a warning. But if the situation gets out of hand, the local administration is informed.

Nisa recollects one such incident, which took place over two years ago. “A large group of people had come to the forest once to cut the trees down. When we tried to stop them, they behaved violently. We immediately informed the forest department and entrusted them with the matter,” she recalls.

Local residents are dependent on the forest for firewood, but they mostly rely on agriculture to make ends meet. The women on forest duty always allow people to collect broken twigs and dry leaves, but ensure that no trees are touched.

A safe spot for Olive Ridleys

Inside the forest, the women keep an eye on water bodies frequented by animals. If the ponds run dry, they alert the local administration.

Globally, there are numerous studies that highlight the successful implementation of community-led efforts to conserve local biodiversity. While it is difficult to ascertain accurate statistical data on what impact they make – since most such endeavours are voluntary in nature – studies and surveys by local NGOs report improvement in the overall health of the forests after such initiatives.

“Women and forests are dependent on each other. When there is a dip in forest cover, women are the first to know as they rely on forest resources a lot,” says Sanjukta Basa, a subject expert from Odisha who has followed thengapalli closely.

A report suggests that the forest cover in Astaranga region is up by 63 per cent – from 2.58 sq km in 1985 to 4.21 sq km in 2004. The women themselves have realised this positive change. “We now spot deer in the forests. Sometimes, they enter agricultural lands and damage crops, but we are still happy to provide them a habitat by protecting the forest,” says Charulata.

The concept of Joint Forest Management is gaining ground, but there are challenges on the way, primarily due to the lack of coordination between different stakeholders and the conflicts in management.

Being voluntary in nature, most community conservation efforts are driven by motivation, often due to cultural resemblances. The villagers of Gundalba also started off voluntarily, but were backed by the forest department since 2009. “We do not get any monetary support, but the forest department supports us in case of a rift with intruders. We are in a way recognised by them for the work we do,” says Nisa.

A section of the forest land is said to have been officially handed over to the villagers, but this claim could not be independently verified. However, more than the legal rights, the women believe in doing their duty. “Our work is to protect the forest and that is all what we know. Today, a lot of people are recognising our efforts . We might not understand the technicalities, but we understand the forest and will work to conserve them till our last breath,” Charulata concludes.