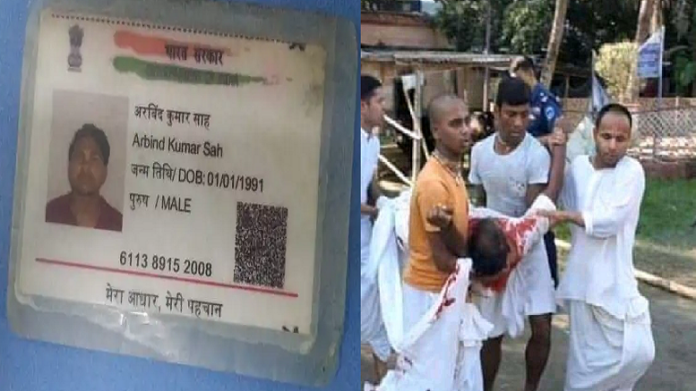 A trend is taking shape – Bangladesh and Pakistan will present their domestic fundamentalism as a “reaction” to “more communalism” in Bharat. Actual slaughter of the handful of Hindus left there will be justified as retribution against the perceived attacks within Bharat.

This will be helped by the narratives being framed by the “moderate” Islamists within Bharat on how the whole Hindu community is now radicalized and the only difference with Nazi Germany is that we do not speak German.

The “farmer protests” are a key element as it helps the Islamists, Khalistanis and the foreign media to write how Hindus are so extreme now that they aren’t just anti-Muslim but against all minorities.

Mildest pushbacks in Bharat will be marketed as the worst thing after Auswitschz. The government has already surrendered aspects of basic governance like adjusting laws, counting citizens, etc., based on such successful lobbying. Even a dozen people protesting a namaz is now “fascist”.

The enemy is very familiar with the Hindu’s obsessive desire with “will accept anything if I can just live in peace and go about my business.” As the temperature increases they are hoping more Hindus will say “we need to do more to maintain our peaceful secular co-existence”.

Hindu debate and over-rationalising is all around us “what was the need for CAA? Why do NRC?” “It is actually good that no action was taken so far” “It is a trap. Don’t do anything”- all backed by impeccable reasoning. But the common theme is kicking the can down the road.

The Hindu ability to explain all the things which can go wrong if any decision is taken is unparalleled. This reflects in how Bharat has run itself and engaged with the world for the last 75 years. Only thing left undebated is the consequence of inaction.

Our enemies whether China or Islamists are very familiar with this deep dysfunction in our nation. They haven’t really exploited it so far as our Islamist neighbours have their own set of incompetencies and China was biding its time. That is finally changing now.

Minor example of the unique feature of Hindu society which Islamists will use to maximum possible benefit We see this all around – more so in the elite as their education arms them with the sophistication required to package our surrender as a virtue.

Of course there is no comparison between the institution-backed pogrom in Bangladesh to anything in Bharat but the Hindu mind will forever rationalise “if only we do more, everything will be OK,” a belief so deep that 1000 years of servitude didn’t alter it.

Kashmir’s ethnic cleansing of Hindus continues. We will waste tremendous amount of time asking why are liberals and international media quiet about this. The deeper and more uncomfortable question is why don’t we see the ordinary Hindu incensed?

We want peace at any price. A dozen Hindus getting executed in Kashmir doesn’t change that. Forget anger, we do not even have the ability to officially say Hindus are being targeted for their religion. Instead we will call the victims “non-locals” to imply somehow its their fault.

(This article has been compiled from the tweet thread of @IndiaSpeaksPR)