The case for Sanskrit non-translatables: Antidote for Dharmic cultural genocide 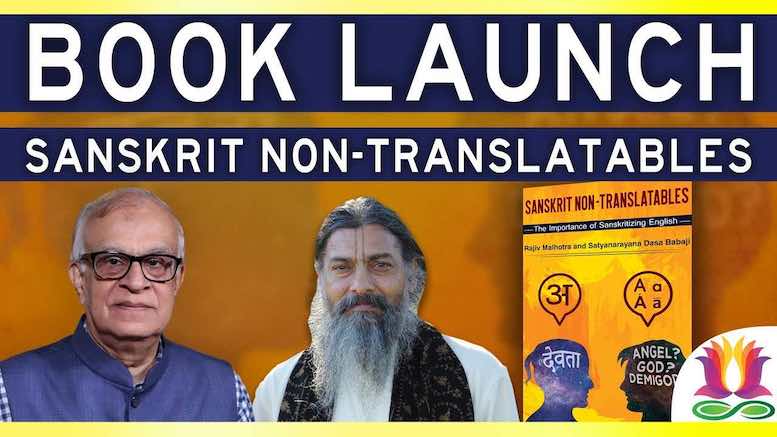 It was a book waiting to be written; a movement waiting to be born. A movement to address and redress the rampant dharmic cultural genocide unleashed overtly and covertly by the Break Bharat forces of various shades and hues in the last 1000  years.

Sanskrit Non-Translatables: The importance of Sanskritizing English by Shri Rajiv Malhotra and Dr. Satyanarayana Dasa Babaji  is a scholarly response to the need to reclaim, reassert our right to interpret dharmic traditions and knowledge, especially the Sanskrit language, through a dharmic lens. It reiterates that several Sanskrit terms have no equivalent in the English language and the need to be used “as is” without naive simplistic translations that dilute, distort , diminish or deny the original meaning of the  Sanskrit terms. The authors advocate loan Sanskrit words incorporated into the English language as the latter is receptive to such loaning from various languages.

In  the eloquent foreword to the  book Shri  Nityananda Mishra, well known scholar and author,  writes that the Sanskrit word for translation is  anuvada, which literally means ‘saying again’; or ‘restating.’ By definition, anuvada can be Sanskrit to Sanskrit; Sanskrit into other Bharatiya languages and Sanskrit into languages like English.

At the recent online book launch of  Sanskrit Non-translatables,  the galaxy of  distinguished panellists echoed and reiterated the dharmic disempowerment of English mistranslation of Sanskrit and the lack of appropriate equivalents in English to reflect the rasa or essence of certain terms in Sanskrit. Rarely have I heard speakers at a book launch offer such valuable insights into a book that have the potential to emerge as an independent  book in itself!

Launching the book, Shri Swami Govind Dev Giriji Maharaj, erudite scholar and Trustee, Shri Rama Janmabhoomi Kshetram, remarked that  he has “personally” awaited such a book for more than 45 years!

“In my discourse on Hindu dharma  and Bharata Rashtra, I struggled to  translate certain core Sanskrit terms and concepts such as dharma, samskar and shraddha into English. Does the Sanskrit word pinda mean rice ball? Does Dharma mean religion? Does Guru mean teacher?

Certain words in Sanskrit cannot be translated into a language that does not share the same sanskriti or  tradition. Sanskrit is a mantric language based on sacred sound vibrations. English is the language of yantra or mechanisation. The result of sweeping mistranslation of Sanskrit is the poison of Hinduphobia injected into us by centuries of Macaulayism, Westernization and Western universalism. Instead, the time has come to translate ‘as is’ certain Sanskrit terms for which there are no corresponding English equivalents and thereby enrich the  English language through such Sanskritization,” says Shri  Swami Govind Dev Giriji Maharaj.

The theme of disenfranchisement of cultural heritage through misrepresentation figures prominently in the book. The authors highlight that Vedic civilization in the “global Kurukshetra” today faces a looming threat due to “cultural genocide” that results in dismantling  civilizational heritage,  destruction, dilution, digestion and elimination  of non assimilable parts by a “predatory civilization.”

“The Sanskrit non-translatables initiative is a strategic reaction to the dangers of cultural genocide,” write the authors.

Dr. Vijay Bhatkar, Chancellor, Nalanda University, and Shri Mohan Bhagawat, Sarsanghchalak, Rashtriya Swayam Sevak (RSS), highlighted the pitfalls of fundamental misunderstandings inherent in the process of engaging with Hindu dharma concepts through English translations and the resulting colonization.  The book, they averred, was an  assertion of the urgency and non negotiability for decolonization.

“I  was perturbed when several  Gurus from various  Hindu dharma sampradaya  insisted that all religions were the ‘same.’ If it were so, why would we be upset about forced religious conversions? When I posed this question to them, they were unable to put their fingers on  what makes Hindu dharma ‘different’. Prakriti (Nature) is constructed on differences.  Different civilizations  have different experiences. For example, there are non translatables in every language. We need to protect cultures through non-translatables. The non-translatability of certain core Sanskrit terms and concepts that began with Being Different culminated in another book The Battle for Sanskrit  that addresses some of the basic but unexamined assumptions of modern Western Indology,” says Shri Rajiv Malhotra.

However, he asserts that his “biggest accomplishment  has been the discovery of Dr. Satyanarayana Dasa Babaji , a Vedantic practitioner, scholar and Sanskrit exemplar second to none.  His  background in Western education and rootedness in Bharatiya traditions made him the perfect collaborating partner for me,” recalls Shri Malhotra.

Spurred by his engagement with Sanskrit in his two earlier books, Shri Rajiv Malhotra  wanted to pick 108 Sanskrit non-translatables and delve into their nuanced meanings. The book began as a comprehensive video series, each of 10-20 minutes duration, on 54 Sanskrit non-translatables that involve a dialogue between the two authors on the context and content of the Sanskrit words, their commonly (mis)used English equivalents, limitations of such an approach and the loss, erosion and dilution as a result of the  mistranslation. These compelling reasons therefore make it imperative to use the Sanskrit originals and thereby Sanskritize the English language.

Some of the insightful and profound  videos can be  viewed here, here and here.  However, the authors and the editing team also saw the potential for the video series to be expanded into a  book, both of which complement each other.

Commenting on the essential  non-translatability of Sanskrit letters and certain words,  Dr. Satyanarayna Dasa Babaji explained that even the cover of the book highlighted this non-equivalence.

“The Sanskrit a  is not equivalent to the letter a  in the English alphabet.  In the Bhagavad Gita, Sri Krishna says Aksharanam akaro asmi  (Among letters, I am the letter a).  However, this is lost when we translate it as the letter ‘a’ in English because the Sanskrit letter has a range of sound nuances that cannot be replicated in English. Our sanskriti , or quest for improvement or refinement, is based on the Sanskrit language and there can never be even superficial equivalences between two vastly different  languages.

Sanskrit has an unlimited vocabulary and Maharishi Panini, the grammarian, codified the language into  4000 sutras. Yet it’s a shame that our modern education has endowed us with the inability to not even know who is Panini. I experienced this when I was a student. Its now time to reclaim our sanskriti through the study of Sanskrit. There is no sanskriti without the study of Sanskrit. The popular understanding  that  music  and dance as sanskriti is limiting. Our sanskriti is rooted in our shastras,” says Babaji.

Both authors  encourage readers to engage with the book by exploring one Sanskrit word a week and learn to use it as part of  our English vocabulary in every day conversations and writing.  This builds up a movement for Sanskritizing the English language. It helps  followers of Hindu dharma to reclaim our adhikara (authority) to save Hindu dharma from further vandalism by the Break Bharat forces; to undertake what Shri Rajiv Malhotra describes as an “intense intellectual tapsaya” to evolve a new paradigm through which to view Hindu dharma traditions unclouded by the miasma of the Western gaze.

(Note: You can order the book Sanskrit Non-Translatables : The Importance of Sanskritizing English online via rajivmalhotra.com or Amazon)