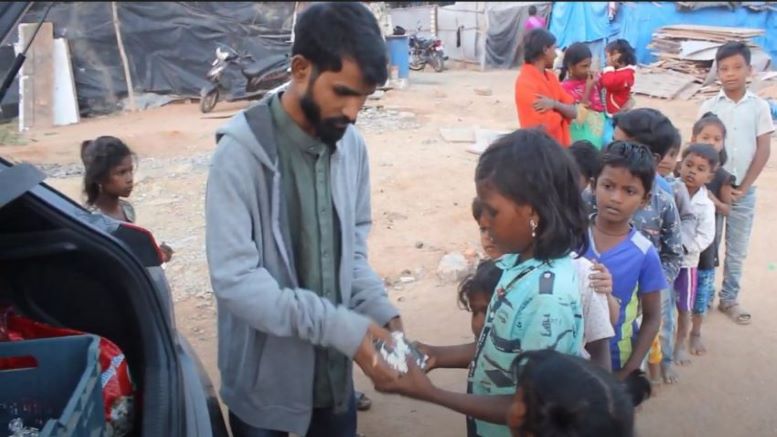 A techie from Hyderabad has shown the way to how excess food from functions and restaurants that are usually wasted can be used to feed the underprivileged. His is an inspirational tale from a child laborer to a techie who has been feeding thousands of poor people every day.

For the last nine years, Malleshwar Rao a Hyderabad techie has been feeding around 2,000 poor people every day simultaneously he is also reducing food wastage in hotels and parties. He has been running the “Don`t Waste Food” initiative with the help of several volunteers.

He says that “I came to Hyderabad to pursue my BTech. I started as a part-time worker for an outdoor catering company. Working there made me realize that there is a lot of food that gets wasted. So I decided to bring the leftover to the poor people`s table”.

He further adds that there were times when his family could not afford food. This inspired him to start the initiative with a group of volunteers. He says “Though I received criticism when I shared my idea, I stuck to it and gathered a few friends, packed some food from an event and went to distribute it among the people on the streets. That is how it all started”

He also added “since the inception of the initiative, we have been able to feed nearly 2,000 people every day. A lot of food gets wasted every day. The same food can fill a poor hungry man`s stomach. If everyone comes forward to donate food, no one would have to sleep on an empty stomach”.

He probably realizes the pain of poverty because his journey began on the streets as a child laborer working on construction sites across the city. What changed his life was the generosity of social reformer Hemalatha Lavanam and her husband who run the Samskar Ashram Vidyalayam. They picked him up from the streets and educated him. He moved to Hyderabad from Nizamabad to acquire his BTech.

The techie’s noble initiative has ensured that many don’t go to bed on an empty stomach. They distribute 500 to 2000 meals a day and were aided by a travel company that loaned them 25 cars during the lockdown to distribute food.

A good deed indeed begets another and the generosity of Hemalatha and her husband has been repaid in an apt manner by Malleshwar.