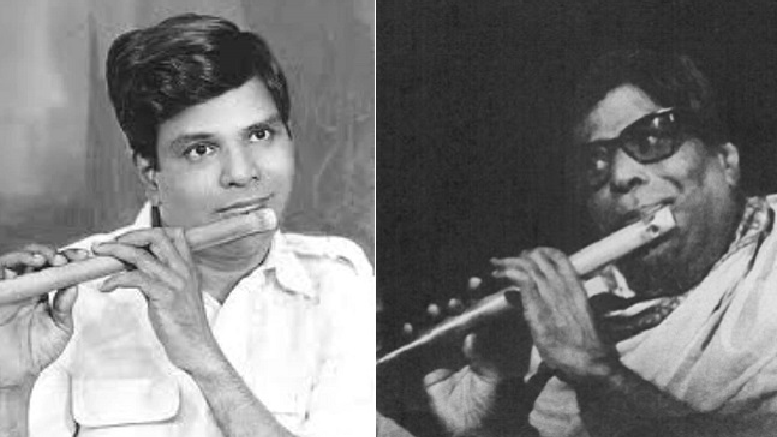 Tiruvidaimarudur Ramaswamy Mahalingam popularly known as T R Mail was born in Thiruvidaimarudur, Tanjavur district in Tamil Nadu to Ramaswami Iyer and Brahadambal on 6th November, 1926. His parents named him after Mahalingaswamy (Shiva), the deity of the nearby temple.

When he was three, their family shifted to Tiruchinapally and all the siblings were put under the tutelage of the music teacher Jalra Gopal Iyer who was their uncle. As Mahalingam was very weak he was made to learn vocal, while his brother Gowtam was learning ﬂute. But Mahalingam was very much attracted to ﬂute and started practicing ﬂute secretly.

Gopala Iyer, who noticed the boy’s passion, advised Mali’s father to allow his son to practice ﬂute saying he would become a good flautist but the father was reluctant because he was worried over the boy’s health.

When the father heard his son play the Viriboni varnam in Bhairavi raga in three speed fluently with ease, he yielded to the advice of Gopala Iyer (Varnam Viriboni composed in Bhairavi raga by Pacchimiriyam Adiappayya who was a famous court musician in Maratha Kingdom of Thanjavore in the 18th century. Syama Sastry who was considered to be one of the Trinity of Carnatic music was a disciple of Pacchimiriyam Adiappayya).

Mali was taken to several towns and he gave his flute recital at various music festivals. He gradually became a bread-earner for his family. Mali’s father also took him to the famous Vizianagaram Maharaja Music College, Vizainagaram in Andhra Pradesh. At that time it was headed by the legendary violinist Dwaram Venkataswamy Naidu. Dwaram Naidu didn’t admit Mali into the college as he was underage but encouraged the kid to continue music and even accompanied him in several local concerts by playing the Violin and Khanjira!

Mali’s first concert was in 1933 at the Thyagaraja festival in Rasika Ranjani Sabha, Mylapore, Chennai at the age of seven. Within a very short span of time, Mali was being accompanied in the music concerts by some of the best accompanists like Chowdiah, Papa Venkataramaiah (Violinists) Kumbakonam Azhagianambi Pillai, and Tanjavur Vaidyanatha Iyer (Mridangam Vidwans).

Later in his career, Mali worked with the legendary Palghat Mani Iyer and Palani Subramaniam Pillai (mridangam Vidwans). Famous Carnatic vocalists Chembai Vaidyanatha Bhagavatar and Maharapuram Viswanatha Iyer once accompanied Mali in a concert on Violin and Mridangam respectively. “Only Mali gives me work for my hands” – says Palghat Mani Iyer, the famous mridangam player who became a longtime friend and accompanying artiste for Mali.

As a child, T.R. Mahalingam had the ability to play any song he listened to it only once. Before Mali, the style of flute playing did not have any gamakas (variations in the pitch of a note) and involved playing the flute flatly. Mali introduced the technique of playing gamakas on flute. He had breath control that enabled him to blow any single note over 40 seconds and continue playing the music after that without gasping for breath!

Mali’s techniques  were popularized by his disciples like Dindigul SP Natarajan T.S.Sankaran, N. Ramani, B. N. Suresh,  Prapancham Sita Ram and many others.

T.R. Mahalingam redesigned the bamboo flute and made his flute reeds thicker and the holes smaller- producing a warm, rich tone even in the lower octave. Flute instrument originally has seven holes whereas Mali used to play with the flute that has eight holes. This required harder blowing of the instrument. “It was the eighth and extra hole that helped provide Mali with the extraordinary control he had on the instrument.” – says Prof. P. Sambamurthy, musicologist.

Mali’s experiments with flute, the playing technique and redesigning the instrument led to opening the doors of creativity in flute music that was hitherto confined to the boundaries of conventional approach and tradition.

Mali was also an accomplished violinist. He had accompanied Chembai Vaidyanatha Bhagavathar on violin in one of his concerts. After moving to Bangalore in 1955, he went to seclusion in 1958, playing very infrequently. In his sixteenth year Mali started having frequent headache which never left him and he had to live with it throughout his life. He became eccentric and on many occasions he would not turn up to the scheduled concerts giving embarrassment to the organizers. Added to this he also became an alcoholic.

He had an excellent command over English language and interest in English literature, though he did not have much of formal education. He was also very good at Mathematics and had a good relationship with the mathematician and human computer Shakuntala Devi. It is said that both of them used to solve together quite a few mathematical puzzles.

Mali was also very good player of carom and chess. He was a fan of cricket. All India Radio gave him a rare honour by allowing Mali to play in any AIR stations for any amount of time. Mali used to write for The Hindu paper regularly and was very candid in his views. He had the ability to identify talent and used to support the young and upcoming artistes.

Shortly before his death, he was awarded Bharat’s highly prestigious Padma Bhushan for music in January 1986, which he refused to accept. Mali was a versatile genius, maverick and eccentric all rolled into one who left behind a rich repertoire and a legacy that continues in Carnatic instrumental music.