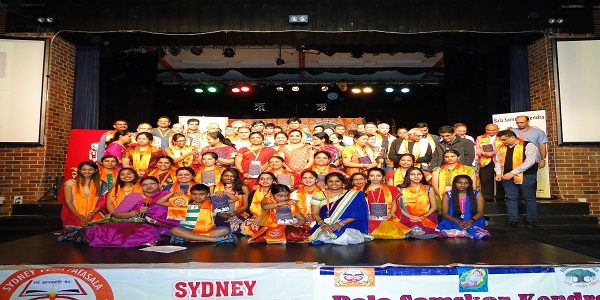 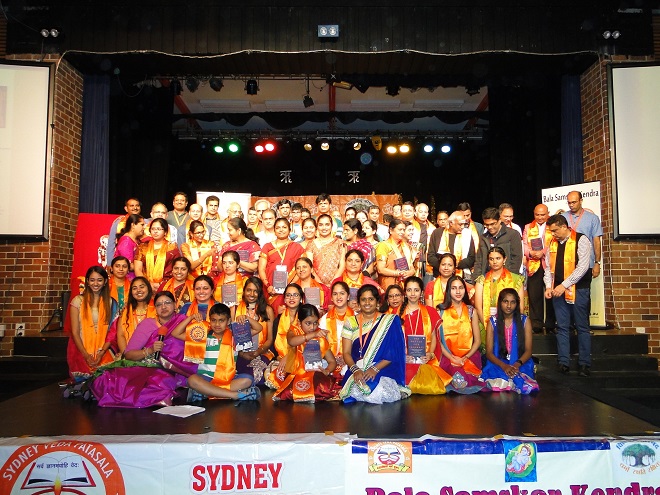 The event was declared open at 3 pm with Mrs. Jayanthi Thilak, Joint General Secretary welcoming everyone.  She then handed over to the MCs of the day,  Lavanya Vishwanathan, Nikita Rao, Sanjana Sridhar and Aishwarya Anilkumar who introduced themselves & commenced by  acknowledging the traditional custodians of this land. Mr. Subramanian Ramamoorthi  JP, President of VHP Australia was invited to give a speech in which he emphasized the importance of Guru placing an analogy on Gurus as directors and students as performers. He also pointed out that the students from a young age are expressing interest in Sanskrit related activities. He then ended by welcoming all the dignitaries & moved on to the inaugural lighting of the lamp whilst the MCs explained the significance of it.

A child from each branch was called upon to light the lamp glorifying “Light is Knowledge”.  The MCs then briefly introduced the audience to the main objectives & activities of VHP highlighting the Hindu Dharma Scripture classes in NSW Public schools & the Sanskrit classes conducted at  BSK and SVP.

The cultural performances commenced with BSK Ponds Vedic chanting which created a divine atmosphere through Gayathri mantra. It underlined the benefits of Vedic chanting through vibrations which act as a therapy to calm the mind. Aaditya Bajad from BSK  Waitara and Hornsby South group recited Ganesha Stotram followed by various other Sanskrit  stotrams by the entire group.  BSK Carlingford then presented Sanskrit number song ‘Ekam Ekam’ which was informative. This was followed by the performance of BSK Toongabbie chanting Bhagavat Gita chapter 15 which portrayed Lord Krishna advising Arjuna how to keep the mind calm in ‘Sukha and Dukha’ and how important it is to perceive these moods equally.

BSK Nuwarra dramatized daily activities in a Sanskrit parade which surely would have taught the audience some Sanskrit words. BSK Ponds portrayed a skit which explained different terms used in our everyday life in Sanskrit. Amidst this, Shuklam Bharadaram was chanted by Arun Rudrakumar, BSK Carlingfrod  which received a big applause from the audience. BSK Homebush recited Ganesh Pancharathnam, a 1300 year old Sanskrit poem composed by Sri Adi Shankaracharya addressing Bhagawan Ganesha. BSK Waitara and Hornsby South portrayed the story of Gajendra Moksha which reiterated the importance of Bhakthi  and surrender towards Bhagwan. BSK Waitara and Hornsby South then continued on to their next performance, Madhurashtakam describing the lovely attributes of  Sri Krishna, The Great King of Dwaraka, master of sweetness and sweetness personified.

Sri Narayan Krishnamurthy and Sri Srikanth Parasuram were invited to come on stage. Sri Narayan Krishnamurthy conveyed his thanks to BSK parents and teachers for building Sanskrit culture. Both of them were honoured for their extraordinary contributions towards teaching Sanskrit. The youth who appeared for the ‘Pravesha’ exam, conducted by Samskrita Bharathi, Bharat  were also honoured. BSK Homebush chanted Gayathri Mantra to invoke the Devatas. BSK Toongabbie then chanted Loka Veeram stotra of Lord Ayyappa. The last item by BSK Nuwarra was a Yoga dance, choreographed by Ms. Ankita Arora, Art of Living teacher and a volunteer, a fusion of yoga and dance forms, which got a reverberating applause from the audience.

Smt. Akila Ramarathinam, General Secretary of VHP Australia was called upon who concluded the event by thanking everyone for their great effort, valuable support & contribution  to make this event a great success.  She further spoke about VHPs major projects & activities in particular, the Hindu Dharma Scripture classes in NSW  Public schools &  the Sanskrit classes conducted at  BSK and SVP.  She further accentuated that  Vedic Chanting has been declared as the “World’s intangible cultural heritage by UNESCO”. She also invited all the volunteers and teachers on stage who were honoured by presenting the book ‘THE BATTLE FOR SANSKRIT’ BY SRI RAJIV MALHOTRA & had a photo session.

Mr. Raj Datta, Councillor of Strathfield, was also invited on stage and he spoke on the importance of Sanskrit and  Bharatiya Culture and appreciated all the volunteers and made a special mention of the youth volunteers for their dedication. The event closed with the Grand Finale Samskrutam song ‘Samkritena Sambhasham Kuru’  sung by children from all branches of BSK,  followed by a vote of thanks by Jishnu Thangallu of BSK Nuwarra . The celebration ended with a sumptous dinner.

We have BSK and SVP classes in many suburbs  in Sydney. Kindly visit our  web site or  kindly contact  [email protected]  for more information regarding  various classes. For Veda classes and Vishnu Sahasranamam classes at Vedic Center please contact  – [email protected]