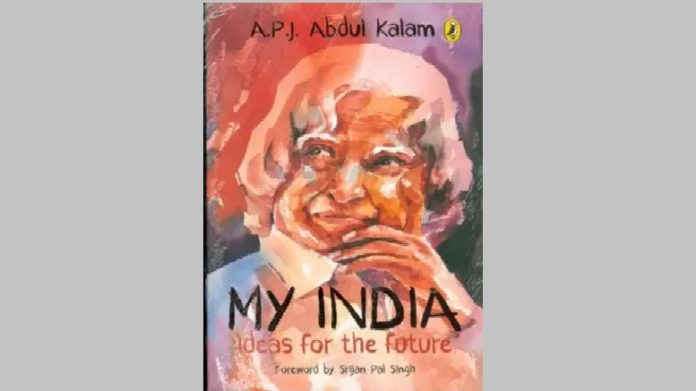 The author of the book ‘My India: Ideas for the Future’, Dr. A. P. J. Abdul Kalam requires little to no introduction. The eleventh President of Bharat is one of the most well-known figures and visionaries of our times. Throughout his lifetime Dr Kalam has written books describing his childhood, and his journey through life.

The book ‘My India: Ideas for the Future’ is a compilation of speeches given by Dr. Kalam in his post-presidency years. The speeches touch upon different themes such as patriotism; they cover Dr. Kalam’s interactions with numerous citizens and provide lessons for the readers, especially the youth of the country, to inculcate certain qualities which would aid in the ultimate goal of national development.

The Country and nothing else

One of the worthiest themes of the book is love towards Bharat. The book in a way is an ode to the motherland, a love letter to the greatness of its men and women and the pure magnificence of its culture and traditions.

Dr. Kalam, speaking about his visit to the Chinese border in Arunachal Pradesh praises the strength and the pride in service to their nation that the soldiers displayed, and encourages each one of us to have such an ambition in our hearts which would make us feel content while serving the nation.

Dr. Kalam’s love for Bharat extends to indigenously made products as well. He is delighted to see Bharat-made mission computers, radar warning receivers, Identification – friend or foe (IFF) systems and display processors in aircraft. It is a moment of pride for him to see Bharat-made devices being used in the defense of the country.

The author praises several unsung fellow countrymen and their qualities. He tells about Mr. Verma, the project director of Light Combat Aircraft project at the aeronautical development agency in Bengaluru. When it was time for him to retire, Mr. Verma decided to settle down in his home district and dedicate the rest of his life to the service of the people of Bihar. Dr. Kalam commends his decision and questions, “How many of you would like to settle down in your home village, after retirement, like Mr. Verma?”

Pages of the book are filled with the praise of other great minds of Bharat. Dr. Kalam covers the life stories of Dr. Mokshagundam Visvesvaraya, Jamshedji Tata, Gandhiji, Vikram Sarabhai etc., and narrates how they endured the hardships of life and succeeded. The author encourages us readers to idolize these visionaries and learn lessons from their life journey. Dr. Kalam hence appreciates Bharat by commending her children.

Dr. Kalam’s admiration for the arts and culture of Bharat is well known. “Music has the power to cheer a person despite any handicap, be it physical or visual. But the most important aspect is how much happiness can be derived by singing for others”, Dr. Kalam said. He also said, “I am fully convinced that art, music, dance and drama connect the multiple levels of people in society and can elevate the minds of the people,” and he believes that the meritorious artists who give such happiness to the people of the country are a form of service to Bharat.

Dr. Kalam at the end of almost every speech urges the reader to have in them qualities that would enable them in being better Bharatiyas and hence making the nation a better place. He picks out these qualities from the anecdotes in his speeches such as Righteousness, Courage, Integrity etc.

“No time to fear,” says Dr. Kalam replied when a reporter asked him whether he was scared to fly Sukhoi Su-30 fighter planes. He added, “When we are deeply involved in our work and we love our work, there is no question of fear overpowering us”. He encourages the men and women of the nation not to lose hope and courage. He believed that what is most required in Bharat today is a spirit of victory, and destruction of the defeatist spirit among the people of the nation.

“Success can only come to you by courageous devotion to the task lying in front of you,” he said.

One of the greatest qualities of a leader is perseverance. According to the author, the former chairman of ISRO, Prof. Satish Dhawan embodied the quality. Dr. Kalam believed that Prof. Dhawan defined perseverance: “When you want to achieve, when you want to become a great leader, when you are involved in a great mission, you are aware that there will always be problems. A leader never allows a problem to be his or her captain; he becomes the captain of the problem, defeats the problem, and succeeds”.

Likewise, Dr. Kalam extends the ‘failure is a teacher’ approach of problem-solving to students. He suggests students not be deterred by setbacks in examinations, and says: “In life, we have to be prepared to go through certain unexpected problems. The problem should not become our captain. Students like you should become the captain of the problem, defeat the problem and succeed”.

Path to the future

One of the essential themes of the book is Dr Kalam’s ideas for the future of Bharat. He advices the youngsters of this great nation to stand for what they believe in, have courage, and strive to make the world around them a better place.

The author’s solution to one of the looming problems that Bharat faces, the epidemic of corruption, is to create a pact of transparency between parents and children. He urges everyone to live a transparent life which is honest and free from corruption. He calls upon us to start a movement of ‘transparency at home’ today.

The former President motivates us to stay hopeful about the future while pointing to the scientific developments made, and the ideas that youngsters have for the future such as building a flourishing civilization on Mars etc. The author hence ensured that there was inspiration on every page, making the reader hopeful and excited for a new future.

An admirer of Hindu Dharma

A commendable aspect of the ‘missile man’ of Bharat is his appreciation for Hindu Dharma and the greatest epics of the land. In his address at the Akshardham Temple in New Delhi, he narrated the story of the presiding deity of his hometown of Rameswaram with fervor. He stressed the importance of time, the nobility and the humility of a leader by pointing to Sri Rama as Purushottama or the Supreme Being.

Speaking about an MIT alumnus and the Director of the Bengaluru-based Lotus Energy Systems, Vidyadhar, Dr. Kalam lauded the reply Vidyadhar gave to one of his buyers who asked him what his philosophy was while negotiating. Vidyadhar said: “Do your best and leave the rest”. This is an important teaching from the Bhagavad Gita.

One of the things that Dr. Kalam enjoyed doing the most was interacting with the youth of the country. He had an affinity with the youth of the nation and an unflinching trust in their abilities and intent in overcoming the problems Bharat faces. He dedicated a large part of his presidency to shaping the mind of Bharat’s youth since he believed that “the ignited mind of the youth is the most powerful resource on the Earth, above the Earth and under the Earth”.

Although the former President is not amongst us anymore, his wisdom and advice for the youth, and the future of Bharat live on through his books and so does the opportunity to interact with one of the greatest minds to have lived in our times. The reader is left with a sense of pride and an urge to give back to the country through service. Dr. Kalam as an author is a must-read for every growing young mind of Bharat and out of all the books he has penned, “My India: Ideas for the future” definitely stands out and is a must-read. The book contains one of the most important lessons for the development of the self and the nation, which is that it starts in the home.

The relatable nature of his anecdotes and the easy language used in the speeches in the book are sure to touch the readers and inspire them to succeed in whatever they set out to do.