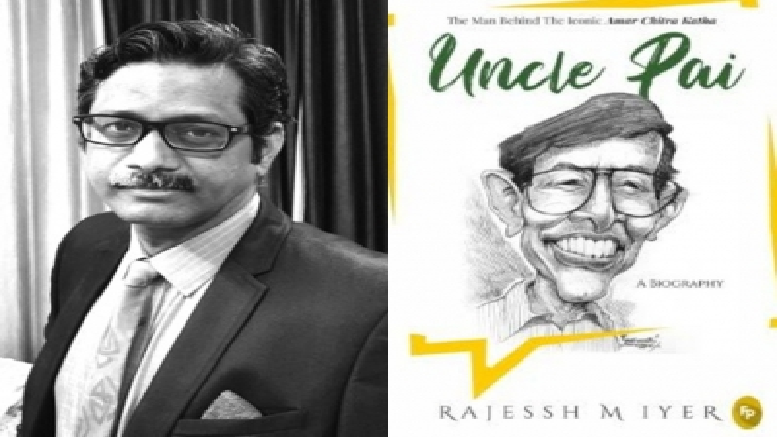 Atal Bihari Vajpeyee was known to choose his words carefully which explained his long pauses between sentences. Thus, when he once declared that after Jawaharlal Nehru, Anant Pai, the creator of the iconic Amar Chitra Katha (ACK) comics and Tinkle magazine, was perhaps the second favourite “uncle” of India’s children, it was no off-the-cuff remark.

“First and foremost, it was his steadfast self-belief. Considering the era he lived in and his conservative, middle class family, the dream that he not only saw, but nurtured so zealously, seemed almost impossible to attain. Honestly, even in retrospect, it seems impractical. Yet, he stuck to it. It’s not possible without extreme self-belief,” his biographer, Rajessh M. Iyer, told IANS in an interview of “Uncle Pai” (Fingerprint) that is replete with little-known stories about the creation of the two epochal brands.

“Next was his meticulousness. He followed a painstaking, almost machine-like, methodology, as if he had been programmed with certain algorithm. I’ve written at length in the book about his influences, especially the impact of success literature. I personally know many who follow the dictums that these success literature books espouse. Seldom have I seen anyone follow it to a T. Mr. Pai did, and with such astounding results,” added Iyer, a media professional of over two decades standing who, in his last corporate avatar, was creative head in the Amar Chitra Katha group.

The legacy is for all of us to see.

“We are part of that legacy, at least three generations of Indians, who now know – and are proud of – the rich heritage of this nation. It’s not as if our heritage would have been lost in the maze, but if you see the usual flag bearers of any cultural legacy and heritage anywhere in the world, it’s often a serious study: scholars wanting general populace to know the history better, parents asking their kids to love something they know so little about.

“Here was something that Mr. Pai created that the end users not just wanted, but cherished, and continue to do so. Little wonder Mr. Pai’s creations, especially Amar Chitra Katha is much more than a mere set of comic books. They are an inseparable part of childhood of millions of Indians, cutting across generations,” Iyer elaborated.

At the same time, he lamented the “apathy towards a man who did so much for India’s heritage. No major recognition for him, especially from the government. That’s sad. I’m planning to soon initiate a public awareness campaign to impress upon the government to recognise the man and his immense contribution”, Iyer said.

From a small village in Karnataka to Mumbai, Pai’s journey and vision, which eventually touched countless lives across many generations, is as interesting as the books he created that helped millions across India get to know their cultural roots..

Consider this scenario: A typical middle-class family of the 1980s’ India. The elder child has a personal collection of a comic book set. The younger sibling who has just stepped into this world demands one of his own. The strictures, though, are clear. First, finish the comics from the old collection, which, in all probability, are bound in sets of four or five in home-stitched packs. Such was the craze for Amar Chitra Katha comics. And such was the vision of Pai, who left behind a cultural and publishing world legacy.

How did the biography come about?

“Rather out of blue, I must say,” Iyer replied, adding that when his literary agent mooted the, he had left his job at Amar Chitra Katha “and frankly, wasn’t very enthusiastic about it. I felt everyone knew everything that they needed to know about the man”.

However, before he could decide on it, he thought of meeting a few of his relatives and therein lay a few surprises that intrigued him.

“I realised that meeting more relatives and colleagues would surely open up vistas neither I nor any of those who admired him knew about him. Before I knew it, I had met a few enthusiastic relatives and a couple of close colleagues from the heyday of Amar Chitra Katha. It was an eye-opener. I was soon sucked into a quicksand of a wonder world and before I knew it I was headlong into my research,” Iyer said.

“The initial research happened rather unknowingly. Obviously for someone who grew up on ACK and Tinkle, being in the middle of the creative whirlpool, there were zillion questions that needed to be satiated. So, rather unwittingly, I was gathering data, which would hold me in good stead,” he said.

What also helped was that during his ACK tenure, he had met Pai’s wife Lalita a few times and she had innumerable anecdotes to recount. Thus, when the idea of the biography cropped up and he decided to write it upon meeting a few relatives, the initial work was to piece these random bits of information together.

“Then came the task of meeting as many relatives and colleagues as possible, who were with Mr. Pai during the heyday of these iconic brands. Sadly, not many from the close circles were around, though thankfully three of the writer-editors who worked closely with Mr. Pai – Ms. Kamala Chandrakant, Mr. Subba Rao and Mr. Luis Fernandes – cooperated and gave me ample insight. Of course, there were Mr. Pai’s relatives, especially his nephews and nieces, all of whom went out of their way to help the book with anecdotes and instances, most of which have found its way in the book,” he said.

The tough part during the research was the contradictory nature of statements. Each instance had multiple paradoxical versions and to give it a true and cohesive structure was undoubtedly a task.

“There was also the task of getting old, out of print issues to validate dates of publication and events around them. There are many urban legends about ACK comic books, many of which carry false dates. Though it was tough to get answers to some of my questions, since very few close colleagues are alive, it was enjoyable, to say the least. It was much akin to reliving your childhood,” Iyer maintained.

“There are a few of such amusing instances, but one that takes the cake is how a seasoned artist deliberately made a wrong display on the cover art, just to test the overzealous copyeditor, who invariably kept finding faults in the art. Everyone from the copyeditor to the colourist, and even Mr. Pai, who inspected every single art before approving, missed it.

“Since the book was published much later, the artist also forgot with the eventual cover featuring the image with the error. What intrigued me more was that it is one of the iconic covers from ACK. So, to all the readers, please pick up the book to know which cover that is,” Iyer teased.

How have ACK and Tinkle managed to thrive in this Internet age?

“One, because their appeal has been extremely strong. Even as the generations who grew up on them crossed the age of reading comics, the strong nostalgia made them go back to both the brands when their kids started reading. Also, what’s undeniable is the credible, well-researched stories that have stood the test of time.

“That, more than even nostalgia, has kept both the brands alive and thriving. The content is testimony to Mr. Pai’s foresight. Neither the stories and the language nor the art seem dated. They’re as contemporary as they were forty years ago. Little wonder both the brands have seamlessly flowed into different versions and platforms, be they ebooks or apps,” Iyer concluded.