Spain – The only reversal of Islamization 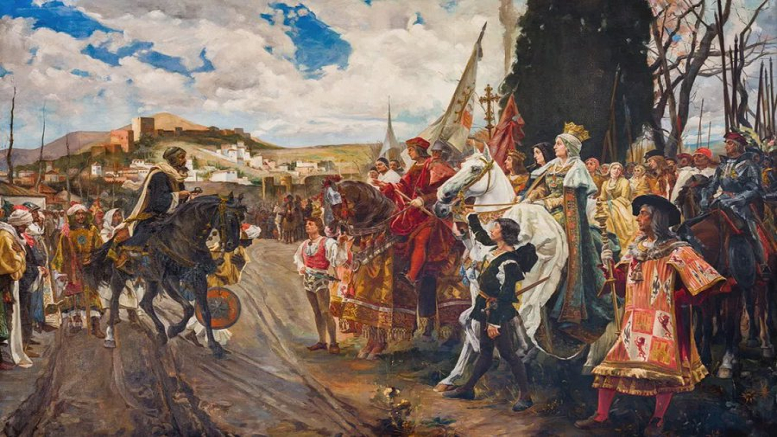 Spain is the only country that could completely reverse the Islamization of the country. It threw off the Muslim rule; converted back all remaining Muslims to Christianity.

In the annals of Islamic history, Spain is one of the two unsuccessful endeavors of Muslim armies. While Bharat is a defeat, Spain was a reversal. Visigothic Christian Spain came under the rule of Islam under the Umayyad Caliphate in as early as 711 CE.

Reclamation of Spain and Portugal (Iberian Peninsula) from Islam and for Christianity is called the Reconquista. It started as early as 718 CE, just seven years after the Islamic conquest of Spain. An independent Christian kingdom called Asturias was created in north Spain.

The Reconquista continued with Cordoba falling in 1236 CE, Seville falling in 1248 and finally the Muslim Kingdom of Granada in the south falling to Ferdinand and Isabella in 1492 CE. In a war that lasted for around eight centuries, Spain was re-conquered from Islam.

All Muslims in Spain were given two options: reconvert to Christianity and live in Spain; or leave Spain and go to any Islamic kingdom. All mosques were reconverted into churches and cathedrals. Spain’s geography, demography and landscape were re-conquered by Christianity.

Compared to all Islamic conquests, this was a very constructive way of re-conquering the sacred space of Spain for Christianity. Architecture which was created during the Islamic rule wasn’t destroyed, but repurposed for Christianity.

That the neo-converts didn’t follow Islam in secret was made sure by appointing godfathers to every new-born. Various practices were followed by the Christian state to make sure Islam wasn’t followed by neo-converts in private. Some of them were harsh but necessary.

Spain is the greatest success of Christianity in reclaiming a land from Islam. And it is consequently the greatest reversal and defeat for Islam. That is why there are constant attempts to make it an Islamic land again as it has once been Dar-ul-Islam (Land of Islam).

What was achieved in 800 years was reversed in some ways in the past five decades under democracy and secularism. Now there are 4% of Muslims in Spain. This would be okay had Muslim countries in Africa also sported a growth of Christian minority.

Situation is much worse than Muslim population of Spain shows. Spain is the entry point of lakhs of African Muslim emigrants to Europe. Many Muslims become citizens in Spain, take EU social benefits, take cheque once a month in Spain but keep living in Morocco.

In 2004 Al-Qaeda hit Spain with deadliest Islamic terror attacks in Western Europe killing around 200 Christians in Madrid Train Bombings. The attack was made 3 days before elections in Spain and managed to sway the election to a party more conducive to Islamic designs.

Coupled with downward demographic trends, tumbling economy and pandemic woes, Spain is primed, just like Greece for an Islamic takeover. It is Islam’s greatest unfinished agenda. Spain shows us that there is no local solution to Islamic conquest.

“Islam has bloody borders”, as Samuel Huntington said. Everywhere in the world, the Muslims have difficulty living with their non-Muslim neighbors, whether they are in majority or minority. To sum up, Islam has different strategies depending on different demography.

When Muslims are in majority (Egypt, Pakistan, Bangladesh) they keep converting and killing non-Muslim minorities, citing conspiracy theories & disloyalty. Repeated massacres and genocides of non-Muslims go unnoticed and unreported until there are no non-Muslims left.

When Muslims are a huge minority, they call for a Civil War, citing victimhood (but always drawing first blood), like in Lebanon, and in the noise of war they kill & threaten patches of majority, who flee the country in fear, changing demography to Muslim majority.

When Muslims are in minority, they call for a separate State, like Bharat, Myanmar or Thailand where they reserve one part of the country for Islam, making it a pure Islamic land and proceed to carve another chunk out of the democratic, secular, non-Muslim country.

The ultimate goal of Islam is world conquest, for Qayamat (Judgment) won’t arrive until every single person in this world is Muslim and that is why “Islam has bloody borders.” We should keep that in mind while planning ‘co-existence’.

This article has been compiled from the tweet thread originally tweeted by Pankaj Saxena (@PankajSaxena84) on June 17, 2022.