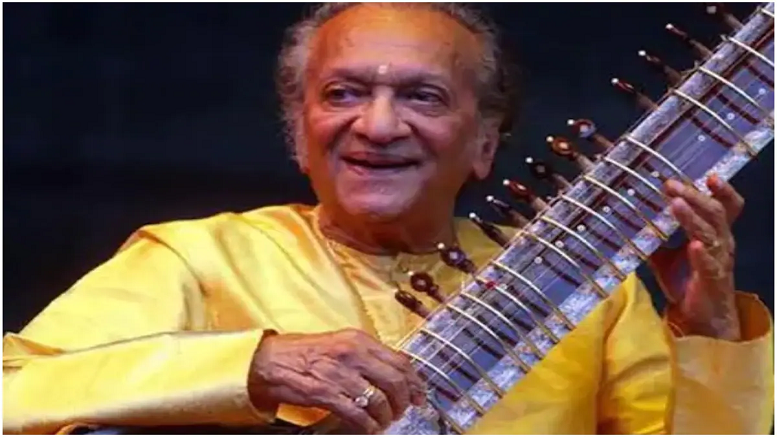 Sitar maestro Pandit Ravi Shankar was born to a Bengali Brahmin family in Bharat on April 7, 1920, Benares, as the youngest of seven brothers and originally named Ravindra Shankar Chowdhury. His father, Shyam Shankar Chowdhury, was a Middle Temple barrister and scholar from East Bengal (now Bangladesh). He served for several years as dewan (Prime minister) of Jhalawar, Rajasthan.

Shyam Shankar was married to Hemangini Devi who hailed from a small village named Nasrathpur in Mardah block of Ghazipur district, near Benares and her father was a prosperous landlord. Shyam Shankar later worked as a lawyer in London, England, and there he married a second time while Devi raised Ravindra Shankar in Benares.

Ravindra Shankar met his father when he was eight years old. He attended the Bengalitola High School in Benares between 1927 and 1928.

At the age of 10, after spending his first decade in Benares, Ravindra Shankar went to Paris with the dance group of his brother, choreographer Uday Shankar. He had become a member of the group, accompanied its members on tour and learned to dance and play various Bharatiya instruments.

Uday’s dance group travelled Europe and the United States in the early to mid-1930s and Ravindra Shankar learned French, discovered Western classical music, jazz, cinema and became acquainted with Western culture. Uday persuaded the Maharaja of Maihar H.H Maharaja Brijnath singh Judev in 1935 to allow Allauddin Khan – the lead musician in his court to become Uday’s group’s soloist for a tour of Europe.

Ravindra Shankar gave up his dancing career in 1938 to go to Maihar and study Bharatiya classical music as Allauddin Khan’s pupil, living with his family in the traditional gurukul  system. Khan was a rigorous teacher and Ravindra Shankar had training on sitar and  surbahar, learned ragas and the musical styles dhrupad, dhamar, and khyal, and was taught the techniques of the instruments rudra veena, rubab, and sursingar. He often studied with Khan’s children Ali Akbar Khan and Annapurna Devi.

Ravindra Shankar began to perform publicly on sitar in December 1939 and his debut performance was a jugalbandi (duet) with Ali Akbar Khan, who played the string instrument sarod.

After finishing his studies in 1944, He moved to Mumbai and joined the Indian People’s Theatre Association, for whom he composed music for ballets in 1945 and 1946. Ravindra Shankar recomposed the music for the popular song “Sare Jahan Se Achcha” at the age of 25.

He began to record music for HMV India and worked as a music director for All India Radio (AIR), New Delhi, from February 1949 until January 1956. Ravindra Shankar started the Indian National Orchestra at AIR and composed for it; in his compositions he combined Western and classical Indian instrumentation.

The Vadya Vrind music orchestra had young musicians such as Pt Shiv Kumar Sharma and Chaurasia besides Ustad Alla Rakha on the percussion. It’s during this time that Robindro (Ravindra) Shankar Chowdhury became Ravi Shankar. In the mid-1950s he composed the music for the Apu Trilogy  (Pather Panchali, 1955, Aparajito, 1956 and The World of Apu, 1959) by Satyajit Ray, which became internationally acclaimed. He was music director for several Hindi movies including Godaan and Anuradha.

After coming out from AIR Ravi Shankar started touring the United Kingdom, Germany, and the United States. He started incorporating ragas from the South Indian Carnatic music in his performances, and recorded his first LP album Three Ragas in London, released in 1956.

In 1958, Ravi Shankar participated in the celebrations of the 10th anniversary of the United Nations and UNESCO music festival in Paris. From 1961, he toured Europe, the United States, and Australia, and became the first Indian to compose music for non-Indian films. Ravi Shankar founded the Kinnara School of Music in Mumbai in 1962.

Ravi Shankar won a Grammy Award for Best Chamber Music Performance for West Meets East, a collaboration with Yehudi Menuhin. He opened a Western branch of the Kinnara School of Music in Los Angeles, in May 1967, and published an autobiography, My Music, My Life, in 1968.

1968, he composed the score for the American drama film Charly. His influence on Beatles guitarist George Harrison helped popularize the use of Indian instruments in Western pop music in the latter half of the 1960s. Ravi Shankar performed in Western music by writing compositions for sitar and orchestra, and toured the world in the 1970s and 1980s.

The ‘concert for Bangladesh’ Ravi Shankar organised alongside former Beatles Guitarist George Harrison in August of 1971 in New York’s Madison Square Garden, to highlight the plight of refugees from the then East Pakistan became very popular.

Ravi Shankar was nominated for an Academy Award for Best Original Music Score for his work on the 1982 movie Gandhi. He served as a nominated member of Rajya Sabha during 1986-1992. Shankar wrote two autobiographies, My Life, My Music (1969) and Raga Mala (1999). Shankar’s 1996 career compilation In Celebration, was well received by the music lovers.

In 1997 Ravi Shankar became a Regents’ Professor at University of California, San Diego.  Shankar’s son, Shubhendra “Shubho” Shankar, regularly accompanied him on tours. He could play the sitar and surbahar, but chose not to pursue a solo career. Shubhendra died of pneumonia in 1992.

Ravi Shankar taught his daughter Anoushka Shankar to play sitar. Ananda Shankar, the experimental fusion musician, is Ravi Shankar’s nephew. Shankar’s another daughter Norah Jones is multiple-Grammy-winning singer-songwriter who carved a niche for herself  in an eclectic blend of jazz, pop, and country music.

Ravi Shankar developed a style distinct from that of his contemporaries and introduced the rhythm practices of Carnatic music in his Hindustani concerts. His performances begin with solo alap, jor, and jhala (introduction and long elaboration of alap and fast paced climax of classical composition) influenced by the slow and serious dhrupad genre, followed by a section with tabla accompaniment featuring compositions associated with the prevalent khyal style. Ravi Shankar used to sign off his performances with a piece inspired by the light-classical thumri genre.

In 2011, at a concert recorded and released in 2012 as Tenth Decade in Concert: Ravi Shankar Live in Escondido, Shankar introduced a new percussive sitar technique called Goonga Sitar, whereby the strings are muffled with a cloth. Shankar introduced more than 30 ragas in Hindustani classical music.

Ravi Shankar received innumerable awards in his distinguished music career and some of them are:

He passed away on 11 th December, 2012 at San Diego, California after undergoing heart valve replacement surgery. Ravi Shankar is the first recipient of the Tagore Award  in 2013 posthumously in recognition of his outstanding contribution to cultural harmony and universal values.

Ravi Shankar’s popularity in the West led to establish Indian music as a rich tradition to reckon with and paved the way in due course to be treated on the same pedestal with that of Mozart, Bach and Beethoven thanks to the efforts of his successors from Indian classical music who gave concerts abroad and continued the legacy of Ravi Shankar.

In 2020 Indian Council for Cultural Relations (ICCR) organised concerts in Spain to celebrate the 100th birth anniversary of legendary sitar player Pandit Ravi Shankar. This was followed by concerts in several cities of the European country that got a huge response.

For Ravi Shankar music is religion and he strongly believed that the quickest and easiest way to reach godliness is through music. He was a devotee of the Hindu god Hanuman. In his own words, “I often reminisce about all the wonderful places I have seen in the world. I cherish the memories of Paris, New York, and a few other places. But Varanasi seems to be etched in my heart.”

“It’s very difficult for a person like myself, who is demanding so much from life and wanting to give so much back. I am so grateful to all of you…I will ask something more of you. I will ask you to bless me, so that till the last day of my life, I can be active and be creative and try to achieve at least half of what I would like to and make all of you very proud of me,”

Ravi Shankar said with humility in 1978 in a documentary created by All India Radio. True to his desire he was both active and creative till he death and Ravi Shankar performed his final concert, with daughter Anoushka, on 4 November 2012 at the Terrace Theatre in Long Beach, California.

He came to his last concert wearing a nasal cannula, in a wheelchair. He performed the concert breathing through the oxygen tubes and waved at the audience who were applauding tirelessly.  He became emotional and broke out in tears probably sensing that that was his last and final music concert. He will live through his music for ever.

Shivji’s mantra: If you’re honest, your music will reflect it