No, I am not going to say the cliched. I experienced this new perspective on Maa Sita on this Women’s Day when I came across thoughts and wishes of various women who are elder than me and well-rooted in Bhartiya culture. My mind got racing and many new thoughts churned out from that flood of thoughts.

I would like to begin with saluting the sacrifices and perseverance for Dharma, of both Shri Ram and Maa Sita. In fact, not only the two of them, but also king Dashratha, Maa Kaushalya, Maa Sumitra and brothers like Bharat and Shatrughan. Usually, so much patience is not seen in royal families in the history of mankind.

The urban folk, specially girls, are being brought up with utter confusion today that Shri Ram was the one mainly responsible for sending away a pregnant Sita to the forest. However, the truths are not so simple, they are far more complicated and inter-twined.

The best things is to begin with an open mind and start thinking. One need not kill his / her entire emotional system to understand the logical thoughts that bring this perspective out. Think for once, do we blame king Dashratha for sending Ram away to the jungle? No, we don’t. But wasn’t he the one who actually told Ram to go away as Maa Kaikeyi wanted it in the moment of her love for her own son? Indeed, indeed! But it was Maa Kaikeyi who wanted it, she had two wishes in reserve as granted by king Dashratha, and it was she who got greedy and wanted Ram to go away.

So, why don’t we blame Dashratha? Because he was just following Dharma, fulfilling his promise. It brought tremendous agony to him too. He lost his life. So, why do we blame Ram for sending away Sita? Wasn’t he too just following Dharma? The washerman i.e. the society somewhere wanted a proof of Sita’s purity. Since Sita had already, by her own choice (going by the original Valmiki Ramayana as told/ recited to me verbally), went through an Agni Pariksha in Lanka, may be she was not in a position to go through it again (these yogic practices take a lot of personal energy and power). And the rule in those times, was based on Dharma, unflinching unapologetic Dharma. There were no coalition governments or democracies where one could trade positions and money to rule. The rulers were all warriors and most loved were the ones who followed Dharma and led by example. Of course, there are karmic consequences and higher purposes too, we’ll talk about it later.

Ears ring when media, intellectuals keep shouting patriarchy to downgrade Hindu Dharma. But what patriarchy? If we were indeed so patriarchal, king Dashratha would have slapped Kaikeyi, or imprisoned her and never fulfilled her wishes as promised, for he loved Ram as much as his life! Her wishes were granted, though she later was reminded of the folly of her own thinking by her own own son, Bharat. This is Dharma, not patriarchy!

As i said in the beginning, this Women’s Day I came across hundreds of wishes on various social media groups. Of these, a couple struck me hard. It brought about Maa Sita as a bold, independently thinking woman yet within the purview of Dharma, consistently. A woman while wishing Women’s Day attributed her freedom of decision making to the bold decision of Sita to cross the drawn line when Ravan had come to kidnap her disguised as a sadhu! She thanked the decisions of Maa Sita which she took independently and was not remorseful for them. This got me thinking and I concluded that Sita indeed took many decisions on her own.

Sita herself chose to come to the jungles, in spite of Ram telling her that it would be difficult. She was obviously following her Dharma. She was the only wife of Ram through out his life. Ram had promised her that he wouldn’t ever get a second life. He was following his dharma as a husband! Sita wanted that beautiful deer, it was her choice. Sita crossed the line drawn by Lakshman, it was her choice (though the story of Lakshman Rekha is not there in Valmiki Ramayana, it is mentioned in Tulsidas’s version). She could have refused to cross it while remaining within the purview of Dharma! Dharma has a periphery, it has a range. It may even differ looking at short-term and long-term. Dharma is not a thin line constituting of only one decision per situation. There could be options. Ram never condemned her for crossing the line.

Sita refused to go with Hanuman from Ashok Vatika, she wanted Ram to come and rescue her and rest of the prisoners. Finally, Sita went through an Agni Pariksha out of her own will in Lanka (going by original Valmiki Ramayan, which has been narrated to me as a story).

The people who condemn Ram for sending away Sita ‘just because a washerman cast apprehensions’ probably don’t understand that Ram too went to the forest in the first place because of Dharma. Maa Sita is indeed an icon of an independent mind within the purview of Dharma.

However, her pain cannot be belittled in the name of Dharma. It can be accepted as karma. Human bodies have to repay karma, even if spiritually advanced or divine incarnate. But blaming Ram is neither right nor acceptable for he loved her and suffered quite a bit himself. And there are higher purposes too, of lives – after all, Ravan had to be killed. I, being a woman, feel very pained personally for the miseries Sita had to go through. I can’t help being intolerant to people who belittle her pain and dutiful nature in the name of religion. One has to have a woman’s heart or a very spiritual bent of mind to understand this pain. I totally connect to what my mother, Dr Vijaya Prabha, wrote on Maa Sita –  ‘सीता का मन’ (Sita’s heart) : 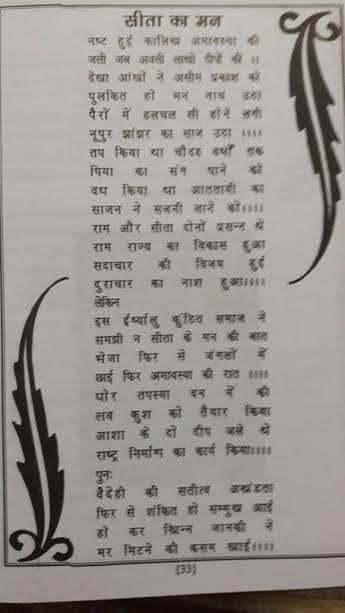 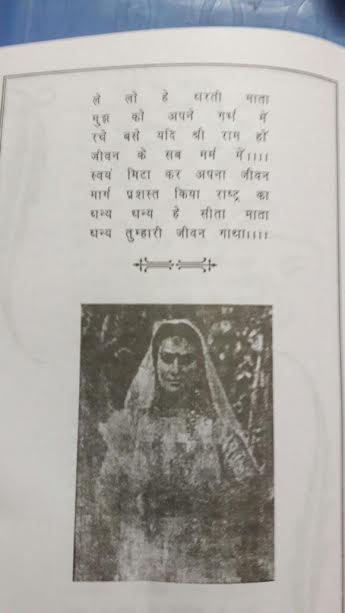 The poem blames ‘ईर्ष्यालु कुंठित समाज’ (jealous frustrated society) for the misery of Sita. If we wish our youth to be as sacrificing as Ram and Sita, we must respect both of them and never belittle Maa Sita’s pain. For they are an ideal couple, and each with an independent mind!