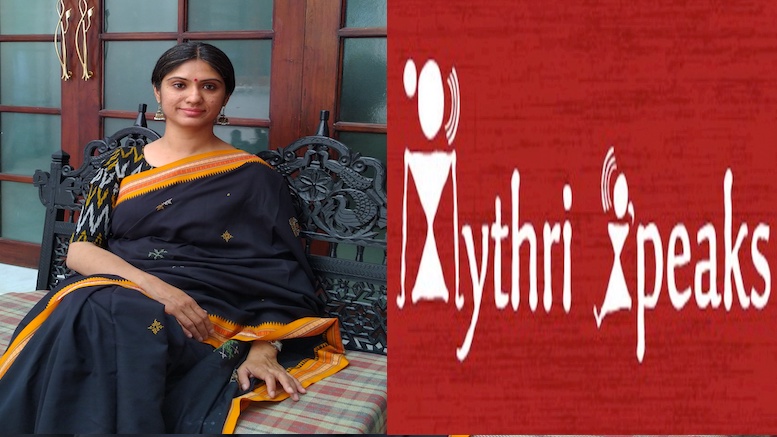 This is the first part of an interview  with Sinu Joseph,  menstrual educator, author and one of the pioneers of the menstrual health movement in Bharat. Her work on menstruation has been unique in its efforts of unearthing the ancient science behind native menstrual practices and bringing forth a narrative which is the Bharatiya perspective on menstruation.

She is the co-founder and Managing Trustee of Mythri Speaks, and also works with The Forward Foundation.

She has studied several Hindu temples, religious restrictions owing to menstruation and their impact on women’s menstrual health. Her study on Sabarimala and the associated Sastha temples explore the way consecrated spaces can alter women’s menstrual cycles. Her book Woman  and  Sabarimala: The science behind restrictions is written from a woman’s perspective, explaining the nature of the temple through Bharat’s traditional knowledge systems, such as Tantra and Agama Shastra.

Her next  book Ṛtu Vidyā,  an attempt to bring together various indigenous knowledge systems that provide information about the science of menstruation, which is relevant even today, is being published in  early October 2020.

1.) You have a background as a qualified engineer. How did you engagement with the social sector begin? What were some of the pushes and pulls?

Engineering is something that happened as part of being a Bengalurean at a time when software jobs were at their peak. It was not a conscious decision. However, a few years after completing my engineering, I decided to spend some time volunteering and started teaching at a government school, through an NGO. After the initial few months, I was asked if I would like a full-time position. It all happened very naturally and was not planned as such. I felt very comfortable working in the social space, and never felt the need to consider any other line of work.

2.) Could you explain the reasons why you consider yourself a Hindu?

I have been asked this question a number of times. In the first few interviews, I explained the finer nuances of the thinking that I associated with being a Hindu. But I later realised that some people were only interested in sensationalising the fact that someone with a Christian name is speaking about Hindu Dharma. I received interview requests where they wanted to label me as an ex-Christian, and my work or what I wrote/spoke didn’t matter to them. The irony is that Hindu Dharma actually encourages one to let go of all identity, and here we attaching so much importance to a name!

Would I still be asked this question if my surname was different?  When we ask someone this question, we need to really think about why we attach so much importance to external identity. After all, the reason I am being asked this question is because of a name I was given at birth, that I had no say in at all.  I understand that people may be curious and that is why I am asked this question time and again. However, it is much more productive to channelise that curiosity towards my work rather than my name.

3.) What was the impact and experience of being born into a different religion and how did it influence you in doing what you currently do?

Initially I thought it made a difference. But as I studied different Hindu dharma  texts and sciences and tried to converse with others who supposedly should know more because they were birth certified Hindus, I realised that my background makes little or no difference.

As a race, we have lost our ability to seek, which was what set us apart from other cultures. We waste our curiosity on gossip, and research has been reduced to copy-pasting what someone who others think is an expert, says! So, there is very little depth in most subjects  and  conversations. We don’t want to put in the effort to step on ground and learn everything afresh with a new lens. This has happened to all of us en-masse as we lost touch with ancient ways of teaching and learning, and this has little to do with our religious background.

Recently, a certified Hindu Ayurveda physician called me to tell me that she is writing a book about the cultural practices of menstruation and wrote about certain temples which I had visited and written about. I was really happy and asked her if she too had visited those temples, thinking that we could have a discussion about our experiences. Her reply was “Of course not, I can’t do all that travelling! I just copy-pasted from the Internet, including from your blogs.’’

Now, you tell me, how much difference does background really make?

4.) How did your engagement with menstrual and reproductive health begin?

I began my volunteering experience as a teacher of spoken English in a government school. In my 9th class, there were about 40 students, of which only two were girls. After a few months of my teaching, one of the girls took a long break and when she came back, she told me that it was because she had attained menarche (and the leave was for the menarche celebration). Around that time, I started to think about doing sessions for girls, and began by getting qualified physicians to talk to the children about menstruation. I soon realised that the doctors were so disconnected with the adolescent world, that their explanations of ovaries and uterus was too technical and the girls simply couldn’t relate to it!

That’s when my dear friend and team-mate late Mrs. Vyjayanthi Krishnamurthy ji and I started doing sessions ourselves. We always began by sharing our personal stories of the first period and laughing about embarrassing menstrual experiences. Soon, the girls would open up and start sharing their experiences with us.

Into this light conversation, we weaved in knowledge about the female anatomy, answered their most common concerns and encouraged girls to ask us anything and everything that was on their mind. We later developed a simple animation film called Mythri, which was intended to reduce our time during these sessions, so that we could focus more on interaction. We made it available free on YouTube, so that other menstrual educators can also use it. That film picked up so much traction, that it got translated into nine Bharatiya languages and has more than 20 lakh views!

5.) How did you provide a powerful counter narrative to the hegemonic (Western!) view of menstruation as taboo and menstrual restrictions as oppressive to women, that has been introjected by indigenous cultures across the world?  (We even blame it on Brahminical patriarchy!)

My intention was not to provide a counter narrative to anything. At least, not consciously. My work was simply to explore the depths of the native knowledge systems to be able to answer the questions asked by adolescent girls during my sessions. In the process, I found that it was very different from the current narrative, and I expressed the same through my writings and talks. It is exhausting to centre one’s work on only responding to others, isn’t it? It is far more satisfying and enriching when our work has a positive purpose of its own.

6.) You have been an ardent spokesperson for the authenticity of embodied experience. Can you tell us about your experiences at the Kamakhya and Chengannur Bhagavathy Amman temples and the insights you gleaned as a result?

I have written detailed chapters on the Kamakhya temple and Chengannur Bhagavathy temple in my new book Ṛtu Vidyā: Ancient Science behind Menstrual Practices, explaining how it shifted my menstrual cycle and transformed my understanding of how ancient Hindu temples can actually have a physiological impact on the human system.

For example,  I have been to the Kamakhya temple twice, once in 2015 and then again in 2019 while drafting my book. And for four years, the date of my period in the month of June coincided exactly with the date of Ma Kamakhya’s menstruation, which is celebrated as the Ambubachi festival (June 21 to June 25).

When we study the seasons and the seasonal regime as per Ayurveda, known as ṛtu chārya, we will discover that the changes that happen in Mother Earth’s cycle during the lunar months of Jyeshta and Ashada which occur in June-July, are very similar to the changes that happen in a woman’s body when she menstruates. Accordingly, that time is considered to be Mother Earth’s menstrual days, and the festival at Kamakhya is celebrated at that time.

When we visit the Kamakhya temple, it is possible to have that incredible experience of how our monthly cycles can come into alignment with the larger cycles of Mother Earth. The details of why and how are explained in my book.

She was the first person who confirmed my thinking and my experience that temples can have an impact on menstrual cycles. I had asked her why women of the menstrual age are traditionally told not to visit the Sabarimala shrine.

Her response was a simple.  “It will affect their reproductive health.”

She did not explain further and I did not ask. But that was enough for me to confidently forge ahead in my studies regarding how Sabarimala impacts women’s menstrual health. What I learnt and experienced in the process, definitely confirmed what she said.

8.) Can you explain to us the core principles of the Bharatiya perspectives on menstruation?

The Bharatiya perspective on menstruation is an all-encompassing understanding of a woman’s sthula sharira (physical anatomy) and sukshma sharira (subtle anatomy) and its interconnections with her environment. It understands menstruation as central to a woman’s overall well-being, and not just limited to childbirth. By understanding menstruation through this lens, women will gain valuable insights into their overall health by observing their cycle, and will be able to take measures to prevent menstrual disorders and related health issues.

The Bharatiya perspective understood that all cycles of Mother Nature are reflected in a woman’s menstrual cycle, and that by living in tune with a woman’s cycle, the entire human race can move towards a more meaningful and healthy existence that is in sync with nature. This is why a menstrual leave was naturally the time when all people, men and women, took time off. We still see this among the farming communities in South Bharat. This is also why women in Bharatiya culture were natural leaders who the community looked up to and relied upon to be guided.

The Bharatiya perspective teaches us to not blindly follow something without a thorough study and contemplation, and at the same time it encourages us to do a searching enquiry before we decide to criticise or let go of a traditional practice. This search for the truth, by questioning everything with genuine curiosity, and to oneself (not directed outwards), is considered as one of the means of separating the truth from the untruth.