“I wish Saraswati had invited me to be her lover”, says Sheldon Pollock 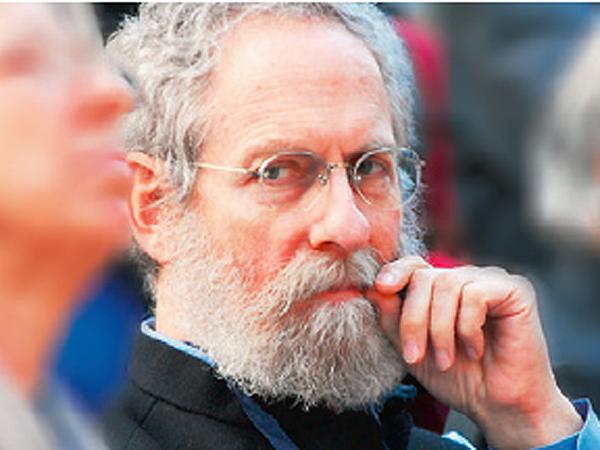 When a people become uneducated about their own heritage, deracinated and unaware, it should not come as a surprise when perverts and impostors come to be regarded as authorities of that culture. Such is the case today with the elites of Hindu  society and Sheldon Pollock, a man feted as the pre-eminent scholar of Sanskrit and our literary and intellectual tradition.

Intellect, integrity and knowledge are three different things, and Pollock has been exposed on the later two counts so often that his ‘academic’ work on Sanskrit texts can only be considered as an agenda driven exercise to bolster his political theories about ancient Bharat. In an interview to Tehelka in 2011, Pollock offers a fascinating glimpse into how his mind works. He says, “I wish it were the case that Saraswati had visited me in my dreams one night and invited me to be her lover.“

If you ask any Hindu what comes into their mind when they think of Ma Saraswati, they will respond with vidya (knowledge), gyan (wisdom), veena (a musical instrument), purity, respect. But how does the ‘esteemed’ Sanskrit scholar Pollock visualize the Devi? As an object of sexual gratification, at best as someone who imparts knowledge through sexual union. And this man is the Chief Editor of the Murty Classical Library—a well-funded project to translate 500 volumes of classical Hindu texts into English.

If you see the video, even the interviewer from Tehelka (a known Hindu bashing media outlet) is taken aback by Pollock’s perverse comment about Ma Saraswati – she says, “Saraswati’s lover is a really strange image…its not something one would associate with her. That’s scandalous.” Of course, she lets Pollock off the hook soon after. Pollock’s arrogant body language during the interview is also revealing, and the arrogance becomes pronounced whenever he makes some provocative comment about Hindu texts and traditions.

Pollock’s comments through  the interview show that he considers himself as a political warrior in addition to an academic – he feels that he is politically obliged to prevent the ‘appropriation of Bharatiya culture’ by Hindu nationalists.

Here are three other gems by Pollock during this interview, followed by HinduPost commentary on what he is implying –

Listen to the video below, where Dr. Koenraad Elst describes how Pollock blocked his access to the academic system (professorship etc), due to disagreements over the Ayodhya dispute. Elst stood by the scientific evidence which proved that a Hindu temple had been destroyed to build the Babri mosque at Ayodhya. Whereas Pollock started researching the Ramayana after the Ayodhya dispute with an aim to show that the Ramayana is ‘inherently oppressive’.

The high regard that people like Sheldon Pollock and Max Mueller still get in this country prove that Professor Makarand Paranjape of Jawaharlal Nehru University  is right in saying “the battle to regain India’s civilisational poise, equilibrium, and self-confidence is far from over. In matters of culture, education, and thought, we are still largely colonised and subservient.”

It can be asserted that the sorry state of Sanskrit studies within Bharat is a post-Independence phenomenon – led by Nehru and the Marxists historians he put in charge of education, under the cloak of pursuing the much touted ‘scientific temper’, we turned our back on our Sanskrit classics, viewing them as a useless inheritance. And this is not about xenophobia (fear of the foreigner) – we have many respected scholars from abroad like Koenraad Elst, Dr. David Frawley, Stephen Knapp etc who have done yeoman service for Hindu civilization – the key requirement for genuine scholarship in Indology is an open, humble and empathetic mind, something which Pollock transparently lacks.

From Wendy to Pollock to Truschke, zero respect for the traditions, the sacredness of culture, the sanctity of beliefs or self-assertion.