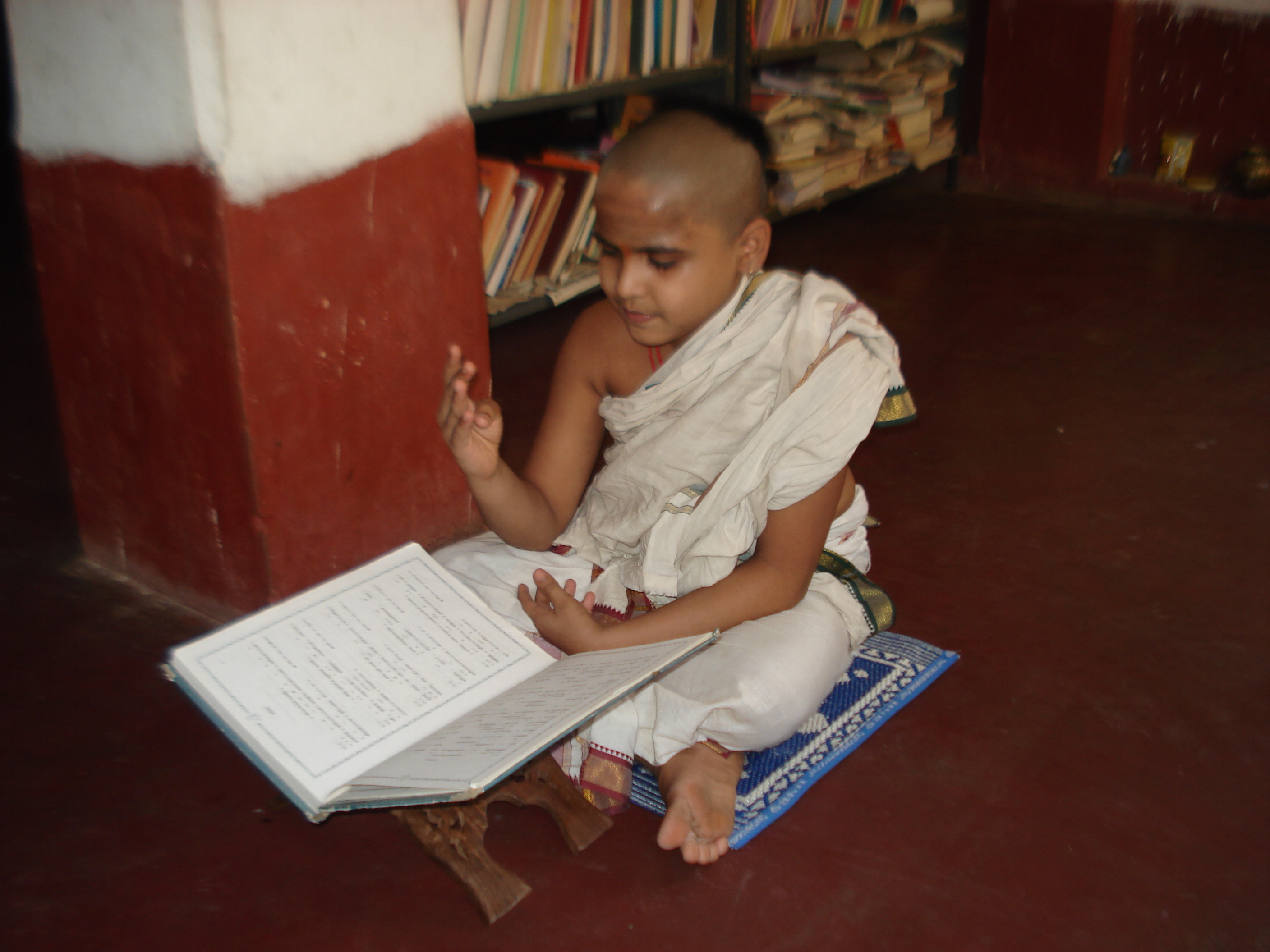 Sathsamhita, a Trust based in Chennai, Bharat, is conducting a workshop where budding Vaidika students, that is students of traditional Veda patashalas, are given an opportunity to get an introduction to the basics of advanced Vaidika topics, the Vedangas and Veda Bhashyas.

This workshop is to be conducted between August 18-20, 2017, at the Veda Vyasa Gurukulam, Chrompet, in Chennai. This article introduces the Sathsamhita group and their motivations to the reader. The aim of this article is to introduce the topics being covered in this workshop as well as stress on the challenges faced, the solutions proposed for preserving this traditional knowledge in the traditional way.

What is the Sathsamhita group?

Sathsamhita is a Trust established by several committed individuals for the pursuit of, propagation of Vedic learning and preservation of Vedic lore.

These are people from different walks of life united by their commitment to Veda Mata. The means of preservation is by individuals and families committing to leading the Vedic lifestyle, regardless of their persuasion and different socio-economic backgrounds. The members of Sathsamhita are convinced that the primary means of preservation and propagation of Vedic knowledge is through learning and teaching the Vedic corpus of Shruti, Smriti in the traditional manner, i.e., by admitting young children in Veda patashalas where they will be instructed by Vaidikas who are themselves leading a traditional Vaidika lifestyle.

Along with instruction in the Veda Samhitas in the traditional mode, i.e., verbal instruction from a Guru supported by svAdhyAya by the vidyarthi, students admitted in these patashalas shall also receive instruction in conventional modern subjects – languages (English, Tamil, Samskrtam), science, mathematics, computer science and social sciences.

The intention is to enable these young vidyarthis to obtain qualifications in the mainstream – X and XII standard qualification, so that they can go on to obtain conventional degrees either in contemporary stream leading to BA/MA etc or traditional Sanskrit stream like Siromani//Acharya degrees

The Sathsamhita trust at present operates out of and has affiliation with a few Veda patashalas in South Bharat.

Several people who have undertaken a traditional Vedic education in early life and have gone on to become scientists, doctors, lawyers are held up as examples and the group tries to take lessons & inspirations from their lives. These lessons are applied to ensure that children who undergo Vedic training can fulfil their dreams in life.

In traditional Hindu thought, all knowledge is modelled as a person or human being, called the Veda Purusha, वेद पुरुष. The core Samhita of the 4 Vedas, is seen as the body of the Veda Purusha. There are 6 main subjects that are ancillary to the main Vedic body. They are called angas or the limbs of the Veda, and hence the nomenclature Vedanga. Since there are 6 of them, they are called the Shadanga – षडङ्ग.

What is the Veda Bhashyam?

भाष्य, in general, refers to a commentary or exposition to describe, place context and the complete meaning and intent of a primary text.

Almost every primary text in the Vedic and Agamic corpus has been commented upon in a Bhashyam. A non-Sanskrit example is Nachininaarkiniyar’s 12th CE commentary on the Tirukkural.

A most comprehensive example is the Rig Veda Bhashyam, authored by Madhava-Sayana in the 14th CE.

A Veda Bhashyam is a most important artefact, as it details the meaning of Vedic hymns, the intent and helps establish historicity, as it is built up by scholars within the tradition.

It is the single most important means of ensuring context, content and intent of a living tradition.

Native scholarship in these subjects

The six Vedangas are primarily studied as an adjunct to or as sub-categories of a larger area of Sanskrit Studies, Indology or Bharatiya history. Most of the primary texts in these areas are Western in origin and the subjects are taught in a Euro-centric pedagogical approach.

The original Sanskrit texts are used as merely sources, to be interpolated, commented upon and interpreted, primarily to an academic audience.

The pre-requisite of membership to the academic audience is neutrality or objectivity, meaning both audience and practitioner of this knowledge is required to be distanced from the subject of study. Thus, even if the practitioner and audience are Hindus, they are required to suspend their personal beliefs and not be animated by their prejudices.

However, the Euro-normative style of these academic pursuits implies that prejudices carried over from a Graeco-Roman logical framework and a Judeo-Christian ethical framework are perfectly valid to the audience and the practitioner.

Given this background, and given the dearth of students engaged in Vaidika studies, it is quite natural that these fields languish both in terms of numbers of scholars as well as in official patronage from the secular Indian Government.

How does this affect the average Hindu?

To start with, we can take the example of Panini himself. His primary treatise on Vyakarana, the Ashtadhyayi, introduces such concepts as recursion and metarules. His sutra structure has been likened to a Turing machine itself.

Now, while modern computer scientists such as Prof. Honsell work with the primary Ashtadhyayi and the Patanjali Mahabhashya corpus, they may acknowledge the insights they used, but the Ashtadhyayi and the Mahabhashya shall only remain sources, and Panini and Patanjali informants. The modern contribution shall be that of the Western scholar and  the concepts and intellectual content produced shall vest with the Western intellectual tradition.

The traditional scholar is nothing more than a native informant and the lay Hindu is left to circulate ludicrous claims about Sanskrit and computers in family WhatsApp groups.

Let us now look at a possible solution.

Sathsamhita has embarked upon the project of bringing the extant scholars in each of these subjects together to give young students (vidyarthis) an introduction.

The intention is two fold – to increase general awareness of the Vedangas and to enthuse vidyarthis to pursue these studies after completion of basic Vaidika Samhita study.

Today, Hindu society in general has understood the importance of building capability in Ayurveda and Yoga for new discovery as well as to be able to exploit discovery for social benefit.

Similarly, when awareness increases of the material and social benefits of being able to study and expand the Vedanga fields, we believe that the social and Governmental support will come. Today, the focus is on preservation for future generations, but this shall be the seed for a future generation of technological and scientific advances that can be genuinely owned by the Hindu civilization.

A glimpse of the scholarship available for the workshop

How can you help?

This workshop is being arranged by private individuals with the support of the Maharshi Sandipini Rashtriya Vedavidya Pratishthan, a unit of MHRD. Institutional support for this initiative can only go so far. There are still shortfalls in funds for travel, local transport, boarding and lodging and printing material and media support. The Sath Samhita Trust solicits your support to make this initiative possible. 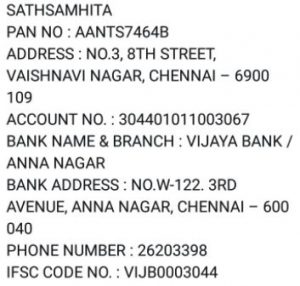