Santhals of Bengal go back to their roots, champion agriculture that nurtures ecosystems 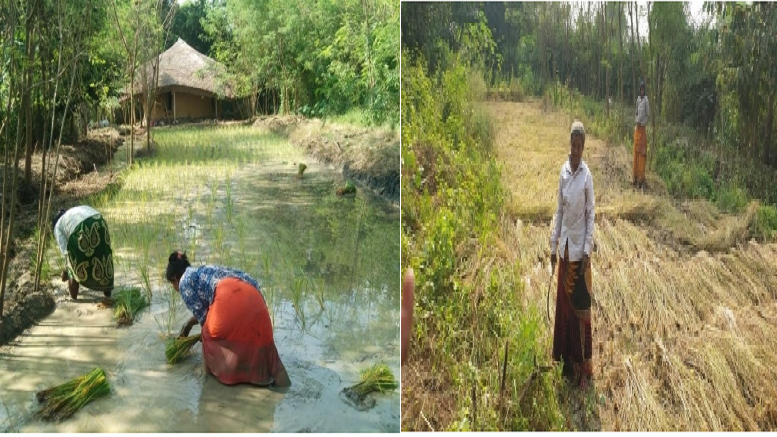 Rabindranath Tagore held the Santal tribes in special regard for their unique way of life in which they combined farming with poetry, music and dance. Spread all across rural West Bengal, the Santhals often own tiny pieces of land but largely work as daily wage labourers in rice fields.

With modern practices of rice farming draining their groundwater and making the community ill, this tribe in West Bengal is tapping into tradition to find more ‘peaceful’ ways of growing crops.

In one of their old traditional songs, ‘Har har dharti rima baha bagan; Baha bagan rima hunar Baha‘, the Santhalis celebrate the green earth teeming with incredible diversity. But with the widespread adoption of modern agricultural practices, often wasteful and harmful, much of this biodiversity got lost.

In the Birbhum district, many Santhals who still forage their food have observed the disappearance of burrowing animals as well as herbaceous plants, especially in and around the rice field ecosystems. Today the Santals in Bolpur are attempting to turn back the clock; banking on traditional wisdom, with some modern scientific ideas, to reclaim some of what has been lost.

The challenge came in the form of rice cultivation ushered in with the Green Revolution, which accentuated excessive use of groundwater, chemical fertilizers and pesticides, and has led to degradation of soil biodiversity over the years. The new varieties of rice, with its shorter and weaker stalks, can’t even be used as thatching or cattle fodder.

The use of chemical fertilisers and pesticides directly impacted the health of farmers. Some Santalis claimed that their cattle had been falling sick and dying after eating the straw or drinking the water from local rice fields.

Recognising the perils of conventional rice farming, a women-led group integrated native wisdom with permaculture for a sustainable economic alternative to the way agriculture and forestry are being practised. Permaculture is the development of agricultural ecosystems intended to be sustainable and self-sufficient. The group from Khanjanpur village of Bolpur has transformed a plot of land measuring slightly less than an acre that was rendered dry with cracked soil and transformed it into a lush green ecosystem.

Their success inspired many villagers to shift to natural farming of native rice varieties that not only preserves groundwater but saves them and their future generations from having to wade through chemical-laden water in order to ensure higher yields.

Agriculture, the way it is practised in Bharat, is one of the major reasons for rapid groundwater depletion according to a 2016 report on groundwater status in West Bengal. Another report on water-intensive Boro rice cultivation also confirms this fact.

Recognising this, Sharmishtha Dattagupta, a former Geobiology professor from the University of Gettingen, introduced permaculture techniques to the Santhali women with the support of an Israeli permaculture consultant.

“Rice planting in the region was previously done in rhythm with nature using rainwater during monsoon. But now even policymakers promote, and governments incentivise groundwater extraction and the use of hybrid varieties of rice that can be planted in the dry winter season,” says Sharmishtha. Since the rice field needs to be flooded with water, villagers sink tube wells that draw water from up to a depth of 80 metres. This groundwater takes several years to recharge.

“Deeper underground water is rich in salts. When used in rice farming, it quickly evaporates and makes the soil salty, damaging it. Overexposure of this topsoil to direct sun as well as ploughing with tractors is devastating as it kills all bacteria, fungus, and earthworms, which play an important role in the soil ecosystem. Basically, we kill the soil ecosystem and then treat it with fertilizers and pesticides to grow food,” she adds.

Sharmishtha with Abhinanda Bairagi, a local biology teacher; Saraswati Murmu Baski, a Santali woman leading the initiative; and Kadamb, who disengaged from the group after her marriage — termed their permaculture initiative — Dularia. In Santali mythology, it means ‘created through love’; the original love that has created all living beings on the planet.

The initiative, started in 2017, involved community members, with a workforce consisting of people across faiths from nearby villages. Expert consultants and volunteers from different parts of the world support them in integrating the methods of permaculture with traditional agriculture.

Yuval Leibovich, Israeli permaculture consultant, co-founder of the initiative says, “Before we started on this small plot of land, rain would fall on the hard soil and flow away, carrying precious topsoil with it. To capture rainwater and restore the groundwater, we figured out slopes, created a system of drains called ‘swales’ where water seeps into the ground and recharges the water table. Organic matter added to swales acts like leaves on a forest floor and retains water even in the dry seasons.”

Within 3-years, the land transformed into a mini-forest ecosystem and indigenous trees flourished. Frogs, birds, crabs, snakes, fish and earthworms too thrived. The community now follows permaculture-based principles such as minimal or shallow tilling, no intervention of tractors, zero use of chemical fertilizers and pesticides, adding nitrogen to the soil by growing leguminous plants and growing separate crops that attract pests so that rest of the food can be grown undisturbed.

The initiative prompted the Santhali community to revert to traditional farming techniques and growing native varieties of rice like ‘Gobindobhog’ which is grown in sync with the monsoons and does not require groundwater use. This variety sells at a market price of up to Rs 150/kg, compared to Rs 30/kg that hybrid varieties of rice grown perennially fetch.

Given the economic opportunity, the community is now eager to transform to natural methods of farming. Some farmers who are part of Dularia have already committed to transforming their own farms and farming methods. Other villagers often stop by at the project location and engage with the Dularia team.

The Dularia team plans to collaborate with local farmers, take on lease, and regenerate ‘abandoned plots’ in 30 Santali villages in Birbhum, and transform them into ‘natural fields’.

Sharmishtha, and the Dularia team explain the benefits of natural rice farming to farmers and advise them on how to embrace it.

What started off as an educational and demonstrational initiative is now inspiring a wide community of farmers who are transitioning to natural rice farming in Bolpur.

“I worked as an agricultural labourer for Bengalis. They used chemical pesticides and fertilizers in the field. Often my face, even my hands and feet were swollen after a day in these fields, a feeling that others shared,” adds Churki Soren, 42, a Santali woman from Bishnubati in Bolpur who has battled poor health on a hospital bed for months. Churki Soren has recently vowed to go natural in farming her land.

Madhusudan Ghosh, 50, a local farmer from Bandhnavagram in Bolpur aspires to adapt to natural methods to completely transform rice farming in his village within the next decade. “Nature itself is unlimited. But the way we are using it, it won’t last long. We are currently exploiting nature by cutting down trees, farming using chemicals, and preventing rainwater from returning to the soil. This is extremely damaging,” he says.

A major challenge is to find the right type of land on which natural farming can be done. Most lands owned by Santhals are small, low-elevation plots surrounded by fields, which over the years have become saturated with chemicals. Excessive groundwater usage in abutting fields has also affected these small plots of lands.