Sanskrit set to become lingua franca of this Thiruvananthapuram locality 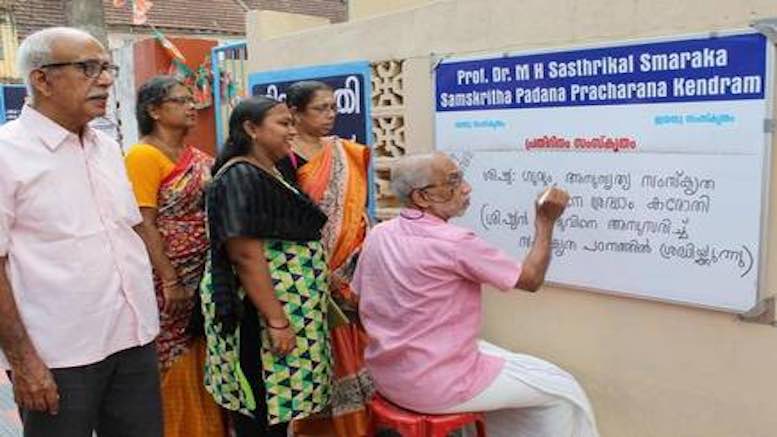 If you order ‘Mashavadakam’ in Mani’s tea shop at Karamana in Thiruvananthapuram, you will get a discount of Re 1 from the the actual price of Rs 5 for the popular snack ‘Uzhunnuvada’. Mashavadakam is the Sanskrit name for Uzhunnuvada and this is Mani’s small contribution to the development of Sanskrit language in this hamlet of Karamana.

H.G. Mahadevan, a product of Government Engineering College, Thiruvananthapuram, who has served in various capacities as an engineer in Europe and Bharat, took avid interest in promoting the language among the people of this area after his retirement in 2018.

Mahadevan told IANS: “Sanskrit is a language which needs to be promoted and this area has a rich background in Sanskrit from time immemorial. So we thought why not be a little more active in promoting the language? We were going smoothly with our endeavour until Covid struck.”

He said that the M.H. Sasthrikal Smaraka Samskrita Padana Pracharana Kendram along with the Vishwa Sanskrita Prathishtanam and Samskrita Bharathi is promoting the language. Mahadevan is the son of illustrious Sankrit scholar late M.H. Sasthrikal, who was considered as a walking encyclopedia for Sanskrit.

Two teachers, Santhosh Kumar and Janani, are the inspiring models for the students of Sanskrit in the ‘Agraharams’ or Brahmin settlements in Karamana, which is in the heart of Thiruvananthapuram city.

H. Ramakrishnan, a chartered accountant who lives in the Agraharam, told IANS, “From little children to elderly people, Sanskrit is popular among all in our area right now, and the ancient language getting promoted in this manner is a tribute to the language as well as its earlier proponents like M.H. Sashtrikal, who knew the intricacies of the language in all aspects.”

There are four white sign boards in different areas of Karamana and each day a new sentence in Sanskrit is written on them so that there is freshness in the promotion of the language. Slowly but steadily, the Karamana area is turning into a major Sanskrit hub and the Devanagari language is turning into a style statement of this area.

Mahadevan, who is relentlessly campaigning for the promotion of the language, told IANS, “Making each and every person in this area speak in Sanskrit is the motto and we are sure that in a few years down the line, we will achieve this dream.”

The team had conducted an exhibition to start with at the Karamana community hall in which all the popular items were displayed with each product having a Sanskrit caption in addition to the Malayalam titles.

“This made people familiar with the common materials which we use daily and finding their Sanskrit meaning made people understand the language through a first-hand experience”, Mahadevan said. Another exhibition was held later and these exhibitions made people more aware about the Sanskrit names of the products which they use daily.

Aadikesavan, a chief general manager at the State Bank of India and a resident of Karamana, told IANS, “This Tamil settlement has had a long lineage of Sanskrit scholars for at least three centuries. Indeed, Karamana was the cultural hub of Thiruvananthapuram those days. The scholars were progressive and one of them, Parasurama Sastry, in fact founded the first woman’s only mutt in Thiruvananthapuram, the Bharathi Sarada Matom.”