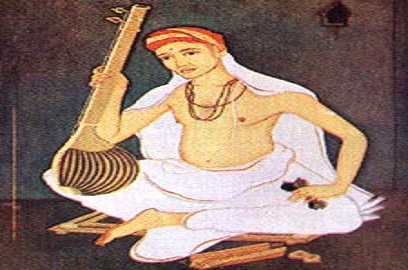 No Rama Navami  puja in the temples down South  is complete without  Shraddhanjali  (homage) to  Saint Thyagaraja – the greatest  exponent of Carnatic music and an ardent devotee  of Bhagwan RAMA.

Saint Thyagaraja was born in Thiruvaiyaaru  in Thanjavur  district of Tamil Nadu  in a Telugu family. What Krishna was to Meera, Rama was to Thyagaraja. The Vedas  say that  Moksha or Mukti can be achieved through  Karma (good deeds),  Bhakti (devotion) and through Jnana  (wisdom or knowledge).  Saint  Thygaraja chose the Bhakti Margam  to connect with Bhagwan Rama – his  Ishta  Devata  or cherished deity. C.Rajagopalachari,  the last governor general of Bharat,  in his introduction to Bhaja Govindam  says that knowledge or Jnana  when it becomes fully mature transforms itself into Bhakti.  If Knowledge does not get transformed into Bhakti, it remains mere tinsel. To think that knowledge and  devotion are different from each other is mere ignorance.

But  the Bhakti Margam which Thyagaraja  chose was  a difficult one to adhere to.  The fine kriti , “Teliyaeru  rama bhakti Margamu”  in Raag Dhenuka   manifests the turmoil  and confusion  in Saint Thyagaraja’s mind to spiritually connect with his divine Rama.  The lyrics of this Kriti say, “O Rama  we do not know the path of devotion. Men in this whole world only roam about in tension all over without being aware of the path of devotion.” Thyagaraja  composed his songs in Telugu .

Music forms an integral part  of Hindu Dharma. It is difficult to imagine  Krishna the Bansuriwala without his Bansuri (flute). A  slokam on Goddess Saraswati  states , “Ya Veena  Vara  danda  Manditakara” – meaning  Goddess Sarswati  whose hands adorn the  divine Veena.  Bhagwan Shiva playing the Damru  represents his cosmic force. Ravan was a fine musician. Legend has it that once when he tried to lift Mount Kailash, Shiva  pushed the mountain  in its place and Ravan was trapped  beneath the mountain.  Imprisoned under the mountain, Ravan  sang hymns in praise of Shiva. Moved  by his melodious music  Bhagwan Shiva granted Ravan with a powerful sword  or Lingam.

It   is said that  Kharaharapriya  is Bhagwan Shiva’s favourite Raagam.  Among the trinity of Carnatic music – Thyagaraja, Muthuswami  Dikshtar  and Shyama Sastri, it was Thyajaraja who was the only one to compose in this raga – Kharaharapriya.  There is no Carnatic  music lover who  has not experienced  the  poignancy  of the  immortal Kriti, “Ramanisamanam Evaru” which states that Bhagwan Rama is the unsurpassed one, there is no equal to him, and it is because of Bhagwan Rama that the Raghu Vamsa achieved  its supremacy. It is said that when the mathematician Srinivasa Ramanujan came to see his bride Janaki for the first time,  she sang the Kriti, “Ramanisamanam  Evaru’’, which  pleased  Ramanujan very much.  Sometimes it is submission , sometimes it is  devotion, at times it is  a petition  as in, “OrachupuChu chedi  Nyayama”  in Raag  Kannada  Gaula  where Thygaraja asks his Bhagwan Rama,  “Is it fair for an eminent person like Bhagwan Rama to look at him  sneeringly?”  This Kriti was sung by Sikkil  Gurucharan  in the  Cleveland  Aradhana festival in 2008  and the singer won  tremendous applause for his rendition .

Thyagaraja‘s  –  Mokshamu Galadhaa  in Raag Saaramati  raises the  philosophically  pertinent question, “Is moksha attainable  by anyone in this world  who has not realized the self?” When  Ms. Subbu Lakshmi –  the nightingale of Bharat – sings this Kriti, one  is transported to  the spiritual realms  of eternity .

When in  Madras, now  Chennai, I would never miss out on the  annual  Thyagaraja  Aradhana festival  held in Tiruvaiyaru, Tamil Nadu. Musicians from all over the world would assemble  in Tiruvaiyaru to sing and pay homage to the saint composer Thaygaraja  on the day he obtained Samadhi.  Thyagaraja’s   ever appealing  Pancha  Ratna  Kritis  is  a set of five  songs  in different  Ragaa  and tala when sung in chorus at the Tiruvaiyaru festival, one gets the feeling that Bhagwan Rama himself has  decended from the Heavens to listen to the songs. My friend  Lalitha Ganesan,  a  brilliant singer of Carnatic music, tells me that  Bhagwan Rama  graced Thyagaraja with his appearance and this empowered him to compose such spiritually elevating songs. “Without the Divine spark it would be impossible to compose such wonderful songs,” she says.  Paying homage to  the Saint composer  Thyagaraja  who  is said to have repeated the name of Bhawgan Rama 96 crore times  would be a  fine way to worship Rama on Rama Navami day  which falls on April 15th this year.

Note: The phrase “Fragrant Gold of Carnatic Music” for Sri Thyagaraja was coined by late Dr. V. Raghavan, a distinguished Sanskrit Scholar and a a brilliant musicologist.