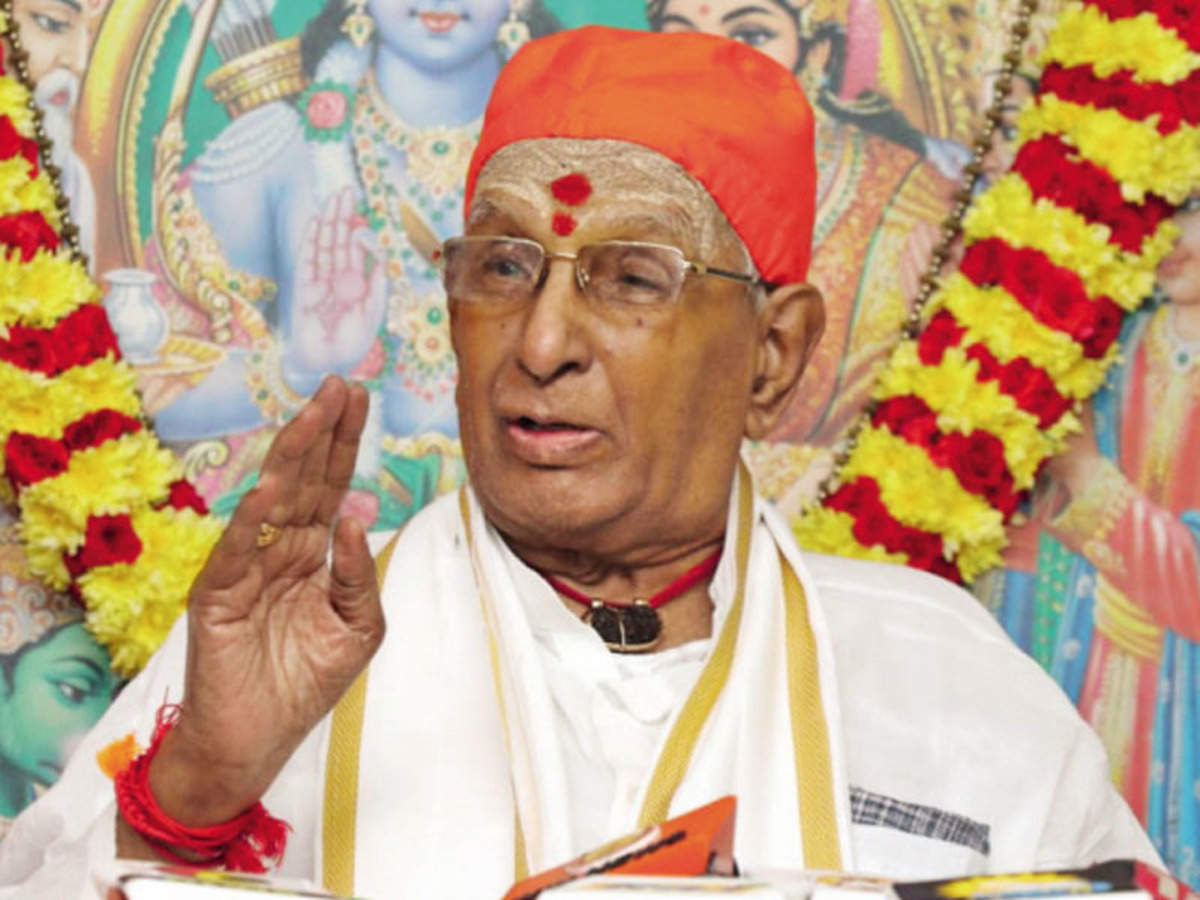 The indefatigable Shri Rama Gopalan, 94,  one of the earliest RSS frontline workers in Tamil Nadu, and Founder, Hindu Munnani, who passed away recently, inspired and mentored several Hindu dharma leaders and   fostered an unapologetic and unabashed  Hindu identity  in Tamil Nadu, taking on the Break Bharat forces with  courage, candour and conviction

The challenge in writing a tribute to a stalwart is this: What can you say that has not been said before?  Popularly known as “Thennatu Thilakar” (Tilak of the  South) and “Veera thurai” (heroic saint), Shri Rama Gopalan, 94, Hindu dharma warrior, veteran RSS (Rashtriya Swayamsevak Sangh) pracharak and Founder, Hindu Munnani (Hindu Front), who passed away recently, loomed larger than life.

Ralph Waldo Emerson said, “Do not  go  where the path may lead, go instead where there is no path and leave a trail.” A trail blazer, Sri Rama Gopalan fostered an unapologetic and unabashed  Hindu identity  in Tamil Nadu, amidst a toxic political ecosystem dominated by the Missionary-Mullah-Marxist axis and other Break Bharat forces. His life is eloquent testimony to his  passion, poise and purpose to the cause of Hindu nationalism.

Born  on September 19, 1927 in Srikazhi in Chidambaram, the birthplace of the Shaivite mystic Sri Thirugnanasambandar, Shri Rama Gopalan shared more than just  a common birth place with the mystic. Like him, he too was deeply rooted in religion and spirituality. He  propitiated Hanuman, his Ishta deva or favourite personal deity. Sri Rama Gopalan exuded Spartan simplicity, bare minimalism, sense of humour and a lightness of being that are the hallmark of a person who travels light.

Growing up in Kanyakumari district, he was drawn to the RSS ideals in the late 1940s and enrolled as a  swayam sevak (volunteer). Inspired by the  legendary  nationalist Shri Bhagat Singh,  Shri Rama Gopalan even adorned his walls with pictures of  his hero! The image of the selfless Shri Bhagat Singh severing his head and offering it to Bharat Mata  remained  an enduring motif in his life in both letter and spirit.

A diploma holder in engineering,  Shri Rama Gopalan  was employed with the State Electricity Board when the Partition of the country took place. As a young swayam sevak, Shri Rama Gopalan volunteered in the refugee camps of Hindus forced to  flee Pakistan. The first-hand experience of  witnessing the horrors of Partition,  compelled him to quit his job and join the RSS  full time, making him among the earliest batch of full time RSS workers in Tamil Nadu.

Meanwhile the missionary mafia and Dravidian propaganda slowly but steadily eroded Hindu consciousness in the state and  forced religious conversions were rampant. In Kanyakumari, he forged an abiding friendship with a Gandhian nationalist Shri Thannu Linga Nadar. Bonded by a common cause, the duo toured the length and breadth of Tamil Nadu. They stoked Hindu consciousness, Hindu unity and Hindu rights in  a community who were sedated by the anaesthesia of pseudo secularism and  demonisation of their culture, traditions and religious practices as “primitive” and therefore in need of reform and deliverance.

The Mandaikadu communal riots in Kanyakumari district and the infamous Meenakshipuram conversions in 1981 in which thousands of Dalit Hindus were forcibly converted to Islam impacted him deeply. It was the catalyst that compelled  Rama Gopalan and Shri Thanulinga Nadar  to establish the Hindu Munnani to counter the  anti-Hindu Break Bharat forces in the state and usher a resurgence of Hindu consciousness and pride in Hindu identity. The face of the RSS in the state,  Hindu Munnani,  the religious and cultural organisation formed to defend and protect Hindu dharma and religious monuments, has also stridently opposed forced religious conversions and radical Islamic fundamentalism.

Through the Hindu Munnani, Shri Rama Gopalan worked tirelessly, leading from the front and working behind the scenes to rally the Hindus,  organise them, and build their capacities to  emerge self-assertive of their Hindu rights and identity.  Like Swami Vivekananda’s clarion call earlier, Shri Rama Gopalan inspired them not cower apologetically trying to minimise, erase or downplay their Hindu identity  to ensure acceptability in an  openly hostile anti-Hindu ecosystem.

Shri S. Vedantam, Founder, Vishwa Hindu Parishad (VHP), Tamil Nadu, and veteran RSS pracharak, was  a close associate of Shri Rama Gopalan.  According to him, Shri Rama Gopalan was an iconic role model for  youngsters of the Hindu dharma, who were inspired and shaped by his courageous vision to rearm Hindu dharma.

“Hindu dharma followers in Tamil Nadu are docile, submissive and never react to injustice meted out to them. While  intra and inter caste clashes were common, they would never come together to fight a common enemy. Shri Rama Gopalan changed all that. After the  formation of the Hindu Munnani, young people belonging to the religion felt drawn to the cause. He galvanised and motivated Hindus individually and collectively unified them  and revitalised a sense of Hindu consciousness and political awareness among the followers. For the first time, they learnt to respond appropriately to frontal attacks on their  religion and tradition,” says Shri Vedantam.

In the 1980s, Jihadist radical Islamic forces  were beginning to entrench themselves in  Tamil Nadu.  Shri Rama Gopalan took them head on. He  exposed their political and financial support base that enabled them to carry on their disruptive activities with impunity. His brazen opposition and  raw courage  almost cost him his life.

In 1987, Syed Basha, a Coimbatore-based timber merchant made a  brutal murderous assault on Shri Rama Gopalan at the Madurai railway station. He sustained near-fatal skull injuries and was in a coma for over a month. To the astonishment of  doctors treating him, he  not only bounced back but also bounced forward. Reinventing himself, he plunged into his activism with renewed  sense of purpose and  determination, even if it meant that he had to cover his head permanently in a saffron coloured cap as the covering of the skull had been ripped apart in the attack.

Shri Rama Gopalan also spearheaded the  Sri Jalakanteswara temple  reclamation movement in Vellore, Tamil Nadu, in which he reinstalled the traditional 5 feet  Shiva lingam in the  temple in the Vellore Fort. The lingam had been relocated to another village following successive  Islamic invasions.

When the British took over after defeating Hyder Ali and Tipu Sultan, they began to use the temple premises  to locate their administrative offices. In 1904,  ‘Lord’ Curzon introduced the Ancient Monuments Preservations Act in 1904 and  after Independence, the monument was taken over by the Archaeological Survey of India (ASI).

Perhaps Shri Rama Gopalan was the gana (attendant) specially chosen by Shiva to redeem  His temple.  In 1980, Shri Rama Gopalan visited Vellore and famously exhorted, “Hindus of Vellore, unite! You have nothing to lose but your chains!”

A year later, Swayam sevak Veerabahu, then the Vellore pranth pracharak, another pillar of the movement, supported by local RSS pracharaks and the Hindus of North Arcot district secretly brought the Shiva linga into the temple premises, and thus restored it to its rightful place in the Vellore Fort  temple. The consecration (Kumbhabhishekam) of the sacred shrine was blessed by  the Paramacharya of Kanchi Mutt (Shri Rama Gopalan was his follower) and supervised by Varriar Swamigal himself—a fitting finale for a sacred mission accomplished. As  one of the warriors and architect of the Vellore Jalakanteswara Temple reclamation movement, Shri Rama Gopalan was a trail blazer  for the Ayodhya movement.

Shri Rama Gopalan’s nuanced understanding and perspectives of the dangers of politicisation of sacred spaces can be read here.

For nearly seven decades. Shri Rama Gopalan was the unified voice of Hindu dharma in Tamil Nadu who  led by example.

“He mentored several Hindu dharma leaders like me. His life was a tapa (penance);  it was seva (service)  that he whole heartedly offered to  his country and religion.  A deeply religious  person grounded in spirituality, his daily poojas were soaked in Bhakti and sublimity. Those of us who were fortunate to witness it, consider ourselves blessed . A skilled orator and writer, fluent in several languages, he translated Swami Vivekananda’s  collection of lectures From Colombo to Almora into English.  He evoked respect and admiration  across society; even from those not aligned to his cause and vision,” says Shri Arjun Sampath, Founder, Indu Makkal Katchi.

Passionate about writing,  Shri Ramagopalan, for several decades, was a regular contributor to the Sangh weekly  Vijaya Bharatham, where he  wrote opinion  pieces, reflections, essays, commentaries and songs  about  violations of Hindu rights in the state. Neither his hectic schedule nor the trauma of  the brutal attack  were obstacles to his steadfast commitment.

In the Ramayana, Shri Rama is described as “Na bhuto, na bhavishyati” (there was never anyone like him; nor will  there ever be any one like him).  Perhaps it is equally applicable  to Shri Rama Gopalan, the eponymous  Kaliyuga  warrior of Hindu dharma,  whose unswerving commitment to Hindu dharma  shone like the Kaustubha.