Rajarshi of Cochin – A Misunderstood Dharmika 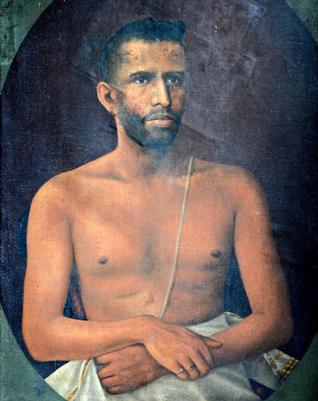 Rama Varma XV, fondly known as Rajarshi, was the Maharaja of Cochin from 1895-1914. He was an efficient administrator and an excellent scholar. Recently when a controversy came up regarding the Nettipattam (golden caprison) of Sree Poornatrayeesha Temple at Tripunithura which was the capital of the kingdom of Cochin, various government authorities and their supporters in social media compared their act of lobbying with this great Dharmika and called him ruthless and torturer of people. Let us have a detailed look at the life of Rajarshi which will clearly show us why he was not only an excellent scholar but also a great administrator who was ill-treated and tortured by the British on trying to work for the betterment of his kingdom and people.

Rajarshi was born on 26 December 1852, to Amma Thampuratti and Bhaskaran Anujan Nambhuthiripad of Kutalaapuratthu Illam. After his upanayana in 1867, he studied under Seshacharya from Kumbhakonam who was one of the great scholars in the Court of Cochin Royal Family at that time. He lost his sister in 1876 and was attacked by dyspepsia in 1877 from which he got little relief for some years. He lost his father in 1881 to whom we was very much attached. Thus by continuous calamities in life, he went into depression and sought the company of books in order to overcome it which resulted in him becoming one of the greatest scholars produced by the Royal family of Cochin. He was praised by Bala Gangadhar Tilak after his speech in All India Ayurvedic Conference at Pune in 1917 by the words, “I had heard that his highness was a scholar among princes, it is only now that I have come to know that he is a prince among scholars.”

In 1888, he became the crown prince and after this he began to take a serious part in the activities of the government. He toured throughout the kingdom of Cochin and acquired the knowledge of its needs. In August 1895, the then Maharaja, Kerala Varma V became seriously ill and on the order of British administration he took charge of the government temporarily. And in September 1895 he was coronated as the Maharaja of Cochin after the demise of Kerala Varma V.

After becoming the Maharaja, Rajarshi worked hard for the betterment of his kingdom. When he ascended the throne, Cochin was a third rate medieval principality. Under his rule the secretariat was empowered, rules of taxations were made strict and the law and order system was freed from corruption. He promoted education in all possible ways. He allocated funds for the better functioning of Kottunnallur Gurukulam which provided basic education free of cost to all including lower caste people with food and accommodation. He also opened a Sanskrit pathashala at Tripunithura which is now known as Sree Ramavarma Government Sanskrit College for higher studies.

The main achievement of Rajarshi during his tenure was the completion of Shoranur- Cochin Harbour railway line. When the funds were not found enough for the completion of the railway line, the Maharaja made a plea for the delayed payment of taxes to the British empire which was rejected. The request of the amount required as loan to the British empire was also rejected and in return the British suggested the collection of the required amount as tax from the people of Cochin.

Rajarshi, unwilling to burden his subjects with a separate tax along with the high rates which they were already paying decided to sell 14 out of 15 Nettipattams used for adorning the elephants during the temple festivals at the Sri Poornatrayeesha Temple of Tripunithura, which was the family deity temple of the Cochin royal family. Earlier this request by the Maharaja was rejected by the temple authorities and other family members but after a discussion with the concerned authorities, the Maharaja got the permission required for this move and with heavy heart sanctioned the selling of the Nettipattams and making new ones temporarily with gold plated silver. It is said that Rajarshi was an ardent devotee of Poornatrayeesha and before taking out the Nettipattams from the temple treasury he bowed to the lord 72 times and also signed a deal which allowed a percentage of the railway income to be given to the temple which will allow the making of new Nettipattams after getting sufficient funds.

This deal was cancelled after independence by the democractic government and the temple administration was also taken over by the government after the accession of the kingdom with Republic of Bharat. The railway line was opened on 16 July 1902 by Rajarshi with a traditional ceremony and he is said to have performed the opening by breaking a coconut with tearful eyes and uttering the words, “Oh Poornatrayeesha! I have done this with good intention for the welfare of my people. Punish me if I have done anything wrong but make this a success.”

The Maharaja in 1905 proposed to retire within a year to private life due to ill health, only to be rejected by the British government. The British government even rejected his request to visit the holy city of Kashi stating unwanted expenditure as the reason. Finally, in 1914 after further worsening of his health condition, Rajarshi abdicated his office. Though being the Maharaja, he is said to have led a very simple life which gave him the name Rajarshi among his subjects. By the time he abdicated his office, Cochin had become a progressive and honoured state in the map of Bharat and hence he is called as the “Father of Modern Cochin”.

Recently, when the government authorities of the temple sold the only old Nettipattam used for temple festivals at Tripunithura in order to make a new one citing improper reasons many people went against them and laid charges of corruption on the authorities. This was tackled by comparing the activity of Rajarshi a century earlier stating that government worked for betterment of temple ornaments unlike the royals who used it for their life of luxury.

While the condition of the temples under government is known to many people across the country, it must be noted that one of the reason which they stated for the replacement was insufficient size of present Nettipattam. But throughout the centuries the Nettipattam has adorned various elephants which are considered taller than any present elephants carrying the murthy of Poornatrayeesha giving rise to contradictions in theory. And even if that’s the case it gives rise to the questions of whether the melting of the old Nettipattam was necessary to make a new one as it was a sign of our heritage? And why didn’t the authorities not discuss with the people concerned with the temple like the Maharaja did?

Thus people in social media and government authorities have to understand the situation and contributions of Rajarshi who developed the Cochin region of Kerala, and the way he gave the Nettipattams away for the development and betterment of his Kingdom unlike the current government authorities which are destroying the antique for no reason, before making an unfair comparison or accusation.