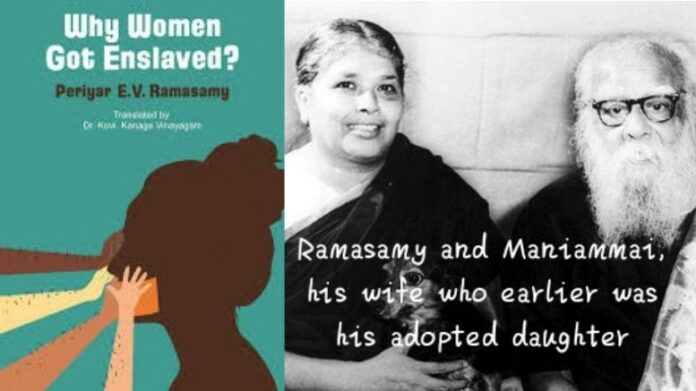 Pen Yen Adimayanal, Why women were enslaved, is a book much celebrated by Periyarists. They claim that the book talks about women empowerment and that it is necessary for girls and women to read the book to break the shackles that tie them down to social obligations. However as usual only some salient points of the book are advertised while the main agenda that would not be tolerated in even the ‘modernised west world’ are purposefully hidden.

EV Ramasamy felt that chastity or fidelity (Karpu in Tamil) shackles women and is used as a tool to enslave them. He suggests in the above mentioned book that women should be free to marry as many men as they want, the same as men. He writes that women should not be tied down in the name of love, chastity, etc as they are peddled by men to control their lives.

In that sense he also encourages a woman and man getting to know each other sexually before committing themselves in a relationship. Any sane society would think that wouldn’t it be detrimental for women considering the fact that they have a uterus and can conceive children if they have such ‘freedom’. But the great Periyar has an answer for that as well.

He says that women should simply abort babies so as not to let them be tied down to the societal obligations of raising children. He says that conceiving a child is also men’s plan to keep women as slaves. Funnily enough he admits that having children prevents men as well from living their lives as they want. He simply wants men to be not concerned about having and raising children as well.

“What is the point of having and raising children? What did humans achieve through this so far? What more could they achieve in the future by continuing it? Even animals and other beings do the same and what have they done for the world?”, he asks in the book. Ramasamy supposedly advocated for empowering women economically, widow remarriage, etc which was done by many reformists in his time.

But advising women to have sexual relationships with whomever they want and abort babies, the threat to their freedom in his view, is a wholly different matter. He wrote in the concerned book that men who claim to be feminists and work for women empowerment are liars and imposters. It seems he admitted his own real intention as he himself is a man.

With the advance of medical science at this age one could argue that women don’t have to go through abortions to avoid having children. However even contraceptives have been proved to be detrimental for the health of women if taken for a lifetime. Imagine advocating this to school girls with the help of the state.

Ramasamy accused men of marrying small girls even in their old age and attributed it to the Dharma Sashtras. He claimed that they advocate enslaving women. But what is hypocritical is that he himself married his own adopted daughter, 25 years, even as he was bedridden and 72 years old.  While the book and Ramasamy’s thoughts can be given platform to be discussed and analysed, pushing them in the name of social justice and women empowerment is pure propaganda. Yet his followers have the gall to distribute his book to school girls in the name of empowering them with truths.