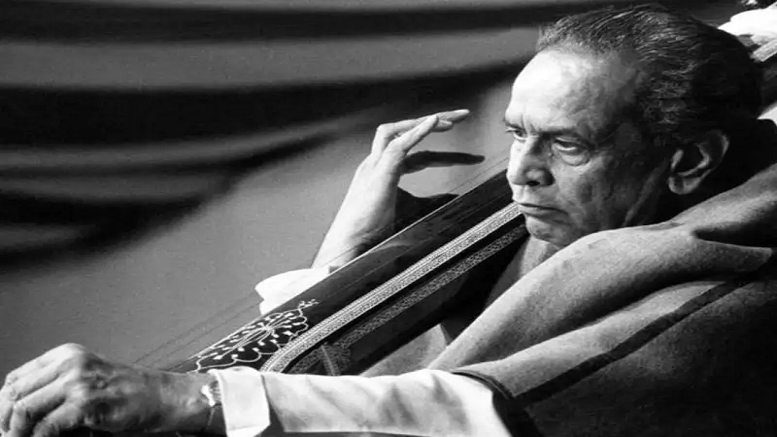 Bhimsen Gururaj Joshi was born on February 4, 1922, in the Dharwad district of Karnataka, in a Kannada Madhwa Brahmin family, to Gururaj Joshi and Godavaribai. He was the eldest of the 16 children.

From an early age, young Bhimsen had a deep interest for music. He loved playing harmonium and tanpura and often would move out of the house upon hearing a procession of bhajan singers or azaan at a nearby mosque. The recording of Abdul Karim Khan’s Thumri ‘Piya Bin Nahi Aavat Chain’ had a huge impact on this budding artist Bhimsen, who took a resolve to become a musician.

He left his home at the age of 11 in order to find himself a guru. His travel expedition began from Bijapur to Pune and later to Gwalior, where he finally joined in the Madhava Music School with the support of famous sarod player Hafiz Ali Khan.

His stay at Gwalior was very brief and he travelled thereafter to New Delhi, Kolkata, Lucknow and Rampur before being tracked down by his father in Jalandhar, Punjab, who successfully managed to get his son Bhimsen return to Dharvad.

His first music teacher was Channappa of Kurtakoti, who had trained with the veteran singer Inayat Khan. Bhimsen Joshi next went to Pandit Shyamacharya Joshi, who hailed from Bagalkot and was a classical singer. Pandit Shyamacharya taught him to both sing as well as play the harmonium.

Bhimsen also had his musical training under Pandit Sawai Gandharva (disciple of Abul Karim Khan who was one of the founders of Kirana Gharana school of music) for four years from 1936 to 1940. Gandharva trained him in Hindustani Classical music, teaching him the nuances of the ragas that formed the base of the Kirana Gharana. He stayed at the latter’s house maintaining a guru-shishya tradition of gaining knowledge and in return, performing odd-jobs.

Bhimsen Joshi did playback singing in many movies including ‘Basant Bahar’ and ‘Birbal My Brother’ ‘Tansen’ and ‘Ankahee’. In 1964, he recorded the song ‘Ramya Hi Swargahun Lanka’ along with Manna Dey for the Marathi movie ‘Swayamvarzale Siteche’. His composition, ‘Bhagyadalakshmi Baarammma’ was used in the Kannada film, ‘Nodi Swami Naavu Irodhu Heege.  Bhimsen Joshi worked with singers like M. Balamuralikrishna and Pandit Jasraj while recording for Kannada movies.

Pt. Joshi gave concerts both in Bharat and abroad. Between 1964 to 1982 Joshi toured Afghanistan, Italy, France, Canada and USA. He was one of the first musicians from Bharat whose concerts were advertised through posters in New York city, United States. He was a purist who has not ventured into experimental forms of music, except for a series of Jugalbandi recordings and concerts with the Carnatic singer M. Balamuralikrishna in Bharat and abroad. He had a rich repertoire of songs in his concerts and it is said that Pandit Bhimsen Joshi never sang the same composition twice in the same way.  He was equally at ease in khayals, thumris, bhajans and natya-sangeets.

Bhimsen’s Hindustani classical music had a unique style though it was influenced by greats singers including Begum Akhtar, Smt. Kesarbai Kerkar and Ustad Amir Khan. He mainly stuck onto Kirana gharana for most part of his career, even though he also incorporated various styles and gharanas from each of his inspirations.

He and Smt. Gangubai Hangal along with others took Kirana gharana to heights and are proudly referred as worthy son and daughter of kirana gharana. Incidentally both were from Old Dharwad district.

In 1984, he became the first Hindustani vocalist to win a platinum disc. He also rendered devotional music in various languages including Hindi, Kannada and Marathi, all of which became very popular albums.

His performance in the music video, ‘Mile Sur Mera Tumhara’ which was primarily created for the purpose of national integration is very famous. He was part of the AR Rahman’s ‘Jana Gana Mana’ feat which was created in the year 2000 to celebrate the golden jubilee of Indian Republic.

To commemorate the first death anniversary of his Guru Sawai Gandharva, he, along with his friend Nanasaheb Deshpande, organized the Sawai Gandharva Music Festival with the Arya Sangeet Prasarak Mandal  in 1953.

Ever since then, the festival has taken the form of an annual cultural event and is celebrated in the second weekend of December in Pune, Maharashtra and also in Kundagol, Dharwad district (birthplace of Rambhau Kundgolkar popularly known by the name Sawai Gandharva) every year. This festival is very popular among the lovers of Hindustani Classical Music. Bhimsen Joshi personally conducted the festival annually from 1953 until 2002.

Bhimsen Joshi received innumerable awards and some of the very prominent awards are:

This prolific Hindustani classical music stalwart had a passion for swimming, yoga, football and driving cars. His last performance was a jugalbandhi with Dr. Balamuralikrishna in 2004 and he gave a last surprise public performance in Sawai Gandharva’s annual music festival in December, 2007. He died on 24 January 2011and was cremated at Vaikunth Crematorium in Pune with full state honours. His music makes Bhimsen Joshi immortal.