Narsingh (Sanskrit: नरसिंह IAST: Narasiṃha, lit. man-lion) is an avatar of Bhagwan Vishnu, one who incarnates in the form of part lion and part man to destroy evil, end religious persecution and calamity on Earth, thereby restoring Dharma.

Narsingh Avatar rescued the child devotee of Vishnu, named Prahlad, from his own evil demon father Hiranyakashipu. Shri Narashima is depicted as having a human torso and legs but with a lion head and claws. Vishnu took this avatar to defeat the demon king who had gained special powers and could not be killed during the day or night, inside or outside, by god, demon, man or animal. A popular deity, you will find this incarnation depicted in sculptures and paintings all across Bharat.

Narsingh Chaturdashi marks the day as per the Hindu calendar when Bhagwan Vishnu took the avatar of Narasimha – this year, it fell on 28 April.

The temple had a surreal setting. Multi-story buildings have encroached it from all sides. The concrete structures were in a deep contrast to the details on the tiny but well-kept temple. Fresh coats of paint and new tiles had compromised the temple’s original look, but it still looked beatific. There was a hall near the entrance which was a part of the original temple complex. There were colorful tiles and a slab in Gujarati.

On the occasion of Narsingh Chaturdashi many devotees came from different areas of the city bringing fruits & maha prashad for this event. With participation by different Hindu communities such as Gujrati, Marwari, Katiyawari, Lassi, Meghwar, etc, this is one of the biggest Hindus festivals celebrated in Pakistan. 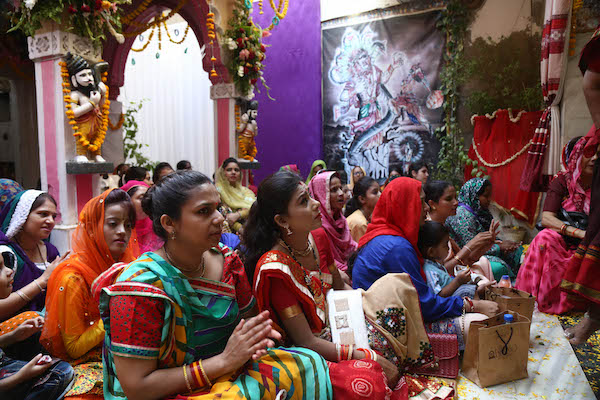 The special guests at this year’s event were Yogi Wajahat and Salman Shaik – both gave a speech on peace & harmony….they said they will provide their medical services to entire community with proper medical camps. President of Pakistan Hindu Council Hotchand Kermani appreciated the work done by the entire temple committee. Shri Guru Mahant Ram Nath Mishra Maharaj Gadi Pati & President of Shri Panch Hanuman Mandir also came at the event and gave their blessings to all people.

More than 10,000 people gathered for the event. With the cooperation of police led by Assistant Commissioner District South, Sarah Javed, the event went off without any hitch. Muslims in the temple neighborhood also welcomed all visitors.