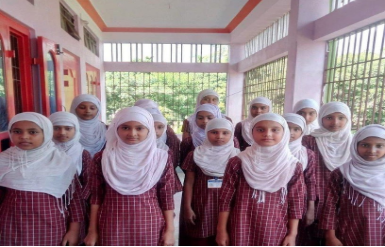 That liberals go all guns blazing on every Hindu ritual by deliberately misconstruing its significance, symbolism and implication, painting them misogynistic is no new news. But it is quite unbearable to see these torch-bearers of virtue signaling hiding behind self-imposed silence when non-Hindu patriarchs, Muslims in most cases, hammer the “power” of empowerment out of woman, and thrust her with their arbitrary dictates. For the secular noise-makers, these blows are their religious rights and must not be meddled with.

Pakistan, the country which renowned ‘feminist’ Swara Bhasker had found tremendously refined, has made some interesting developments in their education sector recently. ‘Abayas’ (full-length outer garment worn by Muslim women) were made compulsory for female students, as district education administration wanted to ‘shelter’ them from undue harassment and molestation. Advisor to the PTI government on education, Zia Bangash defended the decision stating “I want to tell those who see the decision negatively that we have to consider Islamic values & our culture when making such decisions” Quite an unprecedented and unheard way of empowering women. It would be interesting to know what our very own empowered woman, Sonam Kapoor, has to offer on this subject. She, as we understand from her interviews, has Pakistani friends and we assume they are just as empowered and informed as she is. A woman who must weigh in on all world issues when it comes to slaying misogyny, wouldn’t want to comment on this issue?

Given that this is a matter of Pakistan, we give a discount to the Bollywood feminists from commenting on it. However, expectations start to build from celebrated flag-bearers of feminism when Islamist fundamentalists begin to infiltrate the Bharatiya education system with an intention of absolute Islamization. We guess, AB Hannan, the principal at East Point Public School in Karimganj, forgot that Assam is not in Pakistan, but in Bharat. The headmaster of a secular school, who describes himself as an IAS/ACS aspirant on his social media profile, seems to have confused himself with a maulana of some madrasa. He put out a picture of little girls “shielded” in the Islamic head scarf.

The proud educator declares, “to protect my students from evil eyes and as a part of best personality of girls today I made compulsory wearing Hijab for my all girls students at East Point Public School, Karimganj”. If people harboring such primitive mindset are trusted with the task of shaping generations to come, Bharat would not require Taliban to impose Sharia on it. Our institutions, with the likes of AB Hannan helming them, would see to it.

The hijab is a head garb which is mandated by Islamic scriptures and Sharia compliant countries have it as a mandate on their women. Girls, as young as 9-year olds, are advised to cover their “modesty” in ordered to be considered ‘pure and virtuous’. This outlook boosts Muslim men to look at non-Muslim women without Hijabs as inferior beings of loose morals, and legitimize assaulting more liberally dressed women. The “educated” Mr. Hannan doesn’t think very differently either.

Talking to Barak Bulletin, the senior teacher stated that ill-mannered boys of the neighbourhood harass these girls, hence the introduction of hijab. I have never seen or heard of a better manifestation of “girls are responsible for molestation.”

Mr. Hannan must have forgotten that though the larger chunk of his students are Muslims, he was not running a Madrassa. Netizens of twitterverse came to his rescue and imparted some well-deserved education. The heavy criticism he drew compelled the school authorities to withdraw the absurdity they had resorted to.

Bharat is not a Sharia compliant country. In fact, sad as it is for a lot many people, Bharat is not even an Islamic country or a country with Muslim majority. Bharat is a secular state, though with a maligned political history tilting towards chosen minority groups. The political affiliation of certain “secular” political parties, however, cannot be considered while making such imprudent decisions that gear the future of the children of our country into one direction – Islamization.