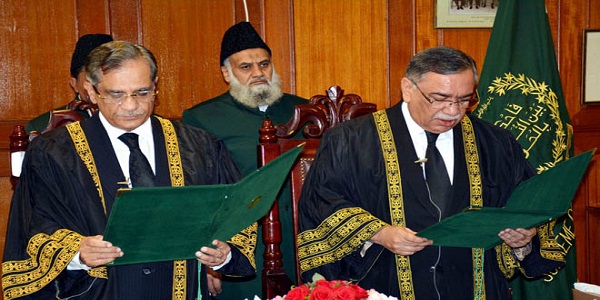 A video has surfaced that shows the current Chief Justice of Pakistan Mian Saqib Nisar openly expressing his contempt for Hindus while making a public speech.

Pakistan Supreme Court’s Chief Justice talks of his unashamed hatred and contempt for Hindus in a public speech. pic.twitter.com/ZajwvtCdUf

It is not clear when the speech was made, but the clipping appears to be from a Pakistani TV channel in which the Chief Justice can be heard talking in Urdu about the two-nation theory. He says “Talking about the two-nation perspective, Sir Syed Ahmed Khan was the prudent man who first conceived this concept that there are two nations (quams) – one Mussalman and the other that I don’t even want to name; Mussalmans are backward because they do not have education. After conceiving this concept, he laid the foundation of such an establishment or madrasa (Aligarh Muslim University)”

So a man who cannot even bring himself to say the word “Hindu” is expected to provide justice for the ~ 2.5 million Pakistani Hindus who constitute less than 2% of the population of the Islamic Republic of Pakistan.

While the Pakophiles and ‘Aman ki Asha’ lobby in Bharat – who as per noted commentator Sushil Pandit constitute an awfully large, and well heeled, section of Bharat’s society cutting across media, academia, diplomacy, bureaucracy, politics, think-tanks and noisy chatterrati – have tried to spread lies that the differences between Pakistan and Bharat are a result of the ‘political problem’ of Kashmir and that civil society in both countries is tolerant and accepting of the other, the reality is that hatred for Hindus and Bharat is a core part of the DNA of Pakistan. This hatred exists deep within the fabric of that nation and can be observed across all social classes, educated or otherwise.

Another interesting fact highlighted in Justice Mian Saqib Nisar’s speech is the foundational role that Syed Ahmed Khan and AMU had in intellectualizing the bigoted view that Muslims are a distinct, superior people who could never share a civilizational identity with Hindus. In the end, this view won and Pakistan was formed – but to Bharat’s eternal misfortune, the two-nation theory germinated by Syed Ahmed Khan & AMU is still thriving today and is growing ever stronger with full support of the Bharatiya State.