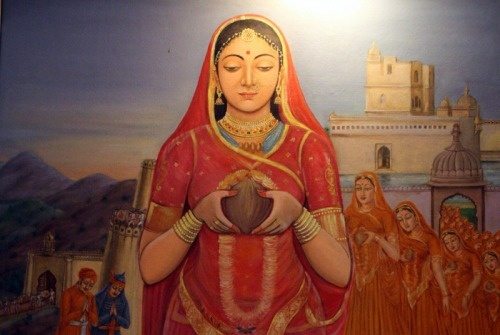 The points of discussion were predictably the stars’ onscreen chemistry & designer clothes & how it would help them break the international market (though that didn’t occur for the poor, co-opted *challenger* to the Khan cinematic hegemony). Did this bear any resemblance to the stocky, Mongoloid homicidal maniac Akbar & the whole cloth creation Jodha Bai? None. But the point was not *historicity*, anyway, since Bharat’s history has been largely written by invaders and post-independence, by the compromised.

The completely fictional story of Akbar and Jodha Bai has been used since time immemorial, to glorify Akbar as a secular, tolerant monarch & to gloss over Bharat’s partial conquest by an upstart branch of Chengiz Khan’s Mongols, owing to bitter infighting and inability of the then leadership, to look beyond their petty quarrels to unite and fight a common, larger than life, history-altering enemy. But it is the most persistent fiction of a Mughal emperor marrying a Hindu princess, and her being important enough in an age of 500 women in one harem, to be remembered and celebrated.

Next, they picked the story of a syncretic romance between one of late medieval Bharat’s most famous warrior icons (who also happened to be a Brahmin) & the illegitimate daughter of a Rajput king. What was one of several chapters in an eventful, adventurous life, was blown up into a lesson about the purity of love regardless of religion, its subsequent conjugal acceptability & therefore, a subtle promulgation of inter-religious love in designer anarkali kurtas & statement eyebrows & lips on its leading lady. Ranveer Singh’s moustachioed, intense face became an icon for Hindu males, ever ready to conflate Bajrangi with Bhaijan, and the anti-Brahmin theme of the movie, refusing to accept the child of this union as a Hindu, was the sort of ghar wapsi antidote/ counter argument needed in these interesting times. Hindus and Muslims marrying for love (or falling in love after marriage) while there was a genocide on – well, *history* said so! It didn’t matter what were the sources of this history, which point of view, which version, which provenance.

A happy consequence was that the Rajputs were now not Sangram Singh & Maharana Pratap, battle-scarred vajras of Indra, but effete partners of the Mughaliya sultanate in pearl earrings. The invaders were now more macho than the Rajputs who were ready to kill or be killed for their honour.

Flush with success, they started to pick their brains about which irredeemable villain to redeem next. Aurangzeb needs a 180 degree redemption but apart from cinematic narrative issues, he’s largely known for his humiliation by the charismatic, larger-than-life Hindu icon Shivaji Maharaj. Shah Jahan’s debauched life story is missing a Hindu female lead, Jahangir wafts by on drugs and booze while making a mushy movie on Babur might win the BJP the UP elections and 2019. Tughlaq is shorthand for gross incompetence and on the whole, the Mamluks weren’t wild about female companions.

But there WAS one story that had a Muslim man and a Hindu woman and a LOT of syncretic possibility, along with the Rajasthani setting that allows runaway costume and choreography budgets.

Which brings me to the angle that was to be taken here.

Modern love (even that portrayed in Bombaiyya movies) is now very different, in keeping with a largely young, socially mobile & relatively affluent population. Availability of vast choice adds sexual attraction as the predominant element to entertainment made for this audience. It helps that their NCERT history text books mirror the *history* of these revisionist movies, and they’re conditioned to be Liberal in values (with a capital L, signifying ideology).

Several filmmakers have pushed the artistic, PG13 envelope recently regarding portrayal of man-woman relationships, and smouldering glances are as much an integral part of a movie as are faux Sufi music with lyrics picked off the backs of trucks. Lust, as Bhansali’s punny Ramleela established, was a genuine, identifiable emotion (whether or not combined with Love), pulling in potent box office esp. when the leads were attractive and comfortable with each other onscreen.

The most famous version of the story of doomed Ratan Singh and his wife, the peerless beauty Padmini, was told by Malik Muhammed Jayesi in his Awadhi poem, Padmavat. It’s a fictionalised version of the siege of Chittor by Alauddin Khilji, one of the most irredeemably bloodthirsty and repulsive tyrants ever to gain control of Bharatavarsha. Padmavati, married to Ratansen, is celebrated in countless stories of her matchless beauty & piety; one of these stories is carried to Khilji by an exiled, vengeful bard to incite lust and the madness of possession in the tyrant. Predictably the siege turns bloody. Ratan Singh ties the kesariya safa on his head, indicating fight unto death, and leaves the fort with a depleted band. Behind him, the entire female population of the kingdom, led by its jewel and the cause of the siege, jump into a fire to avoid falling into the hands of the invading forces. Their fate, were they left alive, would be exactly the same as that of the Yazidi slave women of ISIS today.

Bingo, this story made sense then! It’s the Twilight recipe for success. A stalker hero, a gorgeous, unattainable woman, an ineffective third wheel husband and this situation could mirror ‘Lunchbox’? The Nanavati case? Just about any newspaper headline or even, the breakup of its famous, attractive stars. Many themes in the Padmavat resonate with the Ramayana. This however, is a conscienceless, consequenceless retelling of history. The poet couldn’t make Khilji any more than the straight up villain he was, with no shades of grey. But the carefully picked cast gets it.

The actor playing Khilji described him as an anti-hero with *shades of grey*,indicating he was behind the director and his vision; it was echoed by Ms. Padukone, who abandoned her graduate studies mid-way to focus on her career, a point overlooked by the supportive historians who decry anyone objecting to these *historical* movies for being not well read enough. Mr. Singh capitalised off his Baji Rao persona to reign in 2016, but that he – in fact both of them – are willing to stake their *brand* on this movie, says a lot about them as actors, individuals, and their desire to be part of a post-modern narrative whitewash. The further softening of public sentiment towards irrational longing or even lust, as the *visionary conqueror* (as referred to, by an Indian Express historian) mopes about in brocade peshwaz, singing bad Urdu songs in Arijit Singh’s voice, to a woman he can’t have because her religion and backward traditions (and an evil Brahmin or two) prohibits her from entertaining his advances.

The first invading wave of bloodthirsty Turkic slave-marauders also brought with them biographers & hagiographers who – unlike Hindus who kept their histories largely oral & carefully handed down as a mix of allegories so as to not attract attention & destruction – were bold and meticulous in their recording of their masters’ various exploits. From the 10th century onwards, the history of invasions of this divided country were closely documented, painted, circulated & preserved. This meant countless sources, but as we have already seen, History and an Alternate Retelling of History from Several Points of View from Locals, are two different beasts, specially when it comes to pushing the narrative of love conquering all, especially a Muslim man/ woman who is ready to kill or be killed, for your sorry, backward, orthodox, religion-above-love behind.

Next up, Baz Bahadur & Roopmati. Brace yourselves.