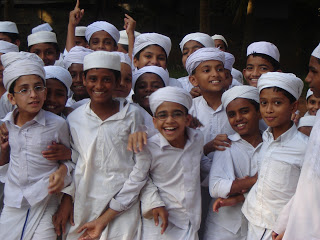 An undated video doing the rounds on social media should act as a wake-up call for every right-thinking Bharatiya, irrespective of religion or creed.

The video carries the logo of YouTube news channel “Headlines India” which has 6.4 million subscribers. In it, the reporter is talking to a hijab-clad Muslim woman in a children’s play area about the proposed population control bill which was introduced in Rajya Sabha in 2019 but is yet to be passed. The states of Assam and UP have introduced their own policies for population control.

The reporter asks, “The government is thinking…do you agree that two children are the best?”

The Muslim woman replies, “No, just two children are not enough for us, we want a full family.”

Reporter: “How many should be there in a full family?”

Reporter: “But prices are rising as is population..”

Woman: “That naseeb (fate/destiny) will provide…they will work and provide for themselves.”

This is the attitude shared by a large section of Muslim society, although HINOs (Hindu In Name Only) and liberals will try to dismiss it as anecdotal. Contrast this woman’s attitude to urban middle/upper middle class Hindus, who even with monthly income of Rs. 1+ lakh feel that raising two children is a ‘financial burden’. Of course, the secular state’s discriminatory laws like quota policies, RTE (which forces Hindu-run schools to hike fees for general category students) and inability to expand tax-payer base, does place an additional burden on general Hindu middle class population. Yet, their reluctance to have children smacks of a cop-out.

As some astute observers have rightly pointed out, the whole debate over population control in our country is deeply distorted. A TFR (Total Fertility Rate) of 2.1 is regarded as replacement rate, and as the latest NHFS survey shows, most states in the country (especially the southern ones) are already well below this replacement rate.

Most developed societies like Japan, European countries now consider their low TFRs to be a problem, since it leads to an ageing and shrinking population.

The data shows that Hindu society has taken the government’s family planning slogan “Hum do, hamare do” (we two, and our two) to heart, and then some – most modern urban Hindu couples are having just 1 child.

The real issue is the gap between Muslim fertility and the non-Muslim one. And this gap varies from region to region – even a slight shift in demography in a border district can impact national security and integrity. As this 2018 article argues –

While Muslim fertility rate is dropping, but so is the Hindu fertility rate, that too in such a way that Muslim population share is not only increasing, but also that rate of increase is accelerating….populations work somewhat like compound interests albeit with changing rates, and humans don’t have an intuition for those functions.

Also, TFR is not the only statistic we should be looking at. A far better data source is population separated by religion and age-group, especially statistics on the 0-4 age group. Did you know that number of Muslim births overtook Hindu births in Kerala in 2016 itself?

What this means is that Kerala’s 54.07% Hindus to 26.6% Muslims according to the 2011 census is because of more old people among Hindus. Much before Muslims become a majority in Kerala, the youth of Kerala will have become Muslim majority.

Muslims too must realize that as the proportion of fundamentalists (more likely to have more children) in their society grows, the grip of the maulanas and imams will increase and Talibanization will grow.

The writing on the wall is clear. Hindus, especially urban Hindus need to have more children, not less! As for any population control law like two-child policy being effective on Muslims, we need a reality check. Our police and other officials hesitate to enter Muslim dominated no-go zones even to enforce traffic rules or remove illegal electricity connections. Historical temples are demolished by over-zealous corporations, but illegal mosques and churches are quietly ignored. Covid lockdowns are relaxed for Eid, but even private Holi celebrations are banned.

So do not for a minute assume that any population policy is going to be uniformly implemented – you can’t even rule out Supreme Court making an exception for minorities. You may be harming your case by being idealistic and without your ears to the ground.

And all the official statistics on religion, TFR etc. haven’t factored in the impact of illegal immigration, Muslim mistrust of enumerators and health workers (ever more heightened now after CAA-NRC scare-mongering), and the crypto-Christian menace in AP, Telangana, Punjab etc due to which Hindu population is being overcounted.