At a time when insensitive, divisive comments were being made by some people with vested interests and defamatory comments being made on whole communities within New Zealand, Auckland witnessed a significant event where young people came together on a common platform to discuss the manner by which they could contribute to New Zealand’s nation building efforts.

The one day conference was hosted by Hindu Youth New Zealand (HYNZ) and New Zealand Hindu Students forum (NZHSF) on Saturday, 29th February at KPMG, Auckland. The conference had more than 120 delegates from around the World, including Fiji, Australia, Malaysia and Bharat (India). The conference welcomed young people of all ethnicities, backgrounds, and affiliations providing the opportunity for important discussions and networking opportunities with various young leaders. 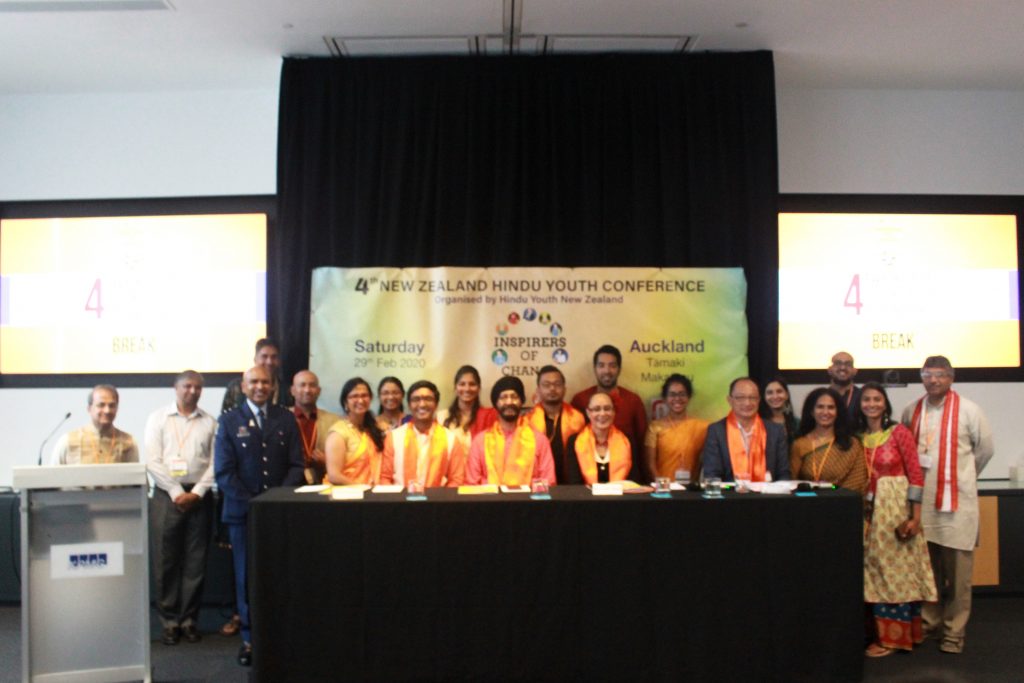 The Minister for Ethnic Communities, Hon. Jenny Salesa inaugurated the event, which was also attended by the Race Relations Commissioner Meng Foon and National MP Kanwaljit Singh Bakshi who all addressed the young delegation.

Minister Salesa further went on to acknowledge the participation of Hindu youth in medicine and technology as well as in a range of different workplaces throughout the country. She also encouraged young Hindus to participate in politics and state sector boards whilst opening her doors for offering mentorships and pathways for young people interested in this sector. She said she was very much impressed by the welcome speech and keynote address given by the Hindu youth before her presentation.

“Be proud of your identity and use it to stand out. Be outstanding and not a bystander,” said Meng Foon, Race Relations Commissioner, in his summing up of his address to the delegates. He went on to commend the efforts of KPMG in their support of such activities saying, “it is heartening and encouraging to see a company like KPMG coming out in full support of encouraging cohesion and inclusiveness.”

Expressing his interest in the deliberations of the day and to ensure that youth voices are heard Hon. Bakshi said in his address, “I would like to receive a summary of today and understanding from Hindu Youth New Zealand of how I can help to make sure what you want is heard by us.” Acknowledging under-representation in certain areas, he also welcomed young people to politics stating that mentoring opportunities will be available to Hindu Youth that approach the party. Hindu Youth New Zealand has a registration portal through which young people can express this interest. Visit http://tiny.cc/HYNZopportunities

The conference had lined up five separate panels with international guest speakers throughout the day, who shared their insights on a range of key topics including economy, education, politics, media, human rights, engagement with the government as well as critical analysis of youth engagement in New Zealand to help towards New Zealand’s nation building efforts.

This was followed by the session called “Hindu Youth – Creating Future Leaders of New Zealand”. This gave the opportunity for young speakers to present, discuss and engage with delegates on key topics relevant to the development of New Zealand’s young leaders who will shape New Zealand’s future. Topics including Education, Media and Politics were covered with insightful Q&A.

Networking opportunities during the day allowed for various delegates to connect with each other in addition to the various officials and government representatives. It provided the necessary space for discussion and helped in forming the pathways for responding to issues.

“One of the key outcomes of nation-building is improving overall welfare leading to a prosperous and opportunity-providing ecosystem. It helps in strengthening the unique identity of New Zealand which shares many similarities with Sanatan Hindu Dharma (Hinduism), that is; mutual respect, inclusiveness and celebrating the ‘Anekta Mein Ekta’, Unity in Diversity.” said Mr. Magesan.

Both the Minister for Ethnic Communities and Race Relations Commissioner acknowledged the participation and contribution of Hindu Youth to New Zealand.

The representatives from various Hindu youth organisations discussed the strengths and challenges they faced when engaging with youth in New Zealand. It was powerful to see the session was completely represented by young women, highlighting and re-emphasising the critical role women play in Hindu society. The session also helped in identifying the opportunities to work together to address key issues of importance.

The parallel interactive sessions were well received by all the delegates. Nischal Pai, Head of Learning, Douglas Pharmaceuticals conducted a critical skill building workshop called “Effective Communication”. Dr. Sangeetha Karmokar from Women Entrepreneurship Centre conducted a powerful session – an introduction to mentorship – called ‘Wheel of Life’, while Braden from The Electoral Commission New Zealand conducted an important session on “Having Your Voice Heard”.

Many young delegates were thrilled to have access to the various mentorship and exclusive internship opportunities with international organisations to help nurture their talent.

If you would like to volunteer with Hindu Youth New Zealand please register your expression of interest on the link below.

What it means to be a Hindu – I