Not only Human Lives, Animal Lives Too Matter 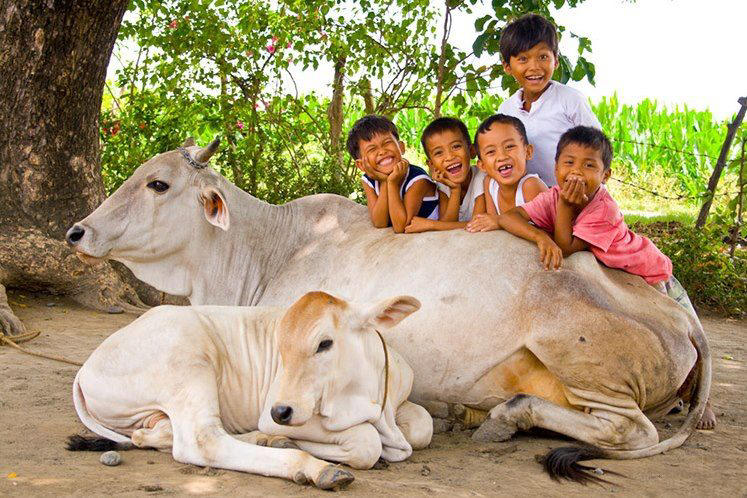 Oh Lord, we are at your feet and offer this meat.

When sinister ideologies sweep people off their feet

And when slaughter of innocents brings laughter

Cow slaughter in Bharat is not a new phenomenon as many communities have been stealthily doing it for years. A new dimension has been added to this phenomenon where people are now publicly slaughtering cows and then posting pictures online with an aim to hurt Hindus.  Some of the gory pictures that have gone viral bring to fore the darker side of the individuals who appear normal humans to the naked eye.

The importunity with which the communist-secular-liberal cabal has addressed the issue of cow slaughter in the country has proven that they are dogmatic individuals who care neither for humans nor for animals.

Every now and then, the cabal rants about Gau Rakshaks and recounts the imaginary horrors unleashed by Gau Rakshaks on the people of Bharat. Just a few days back, a CPI leader was asked to comment on the recent cabinet reshuffle. Instead of going into the merits and demerits of the reshuffle, he condemned Gau Rakshaks.

The arguments against cow ban in some of the articles by self-appointed conscience keepers of society go like this: ‘What sort of sickness BJP/RSS is spreading in the society by imposing cow ban in the country. What a person eats in private should be nobody’s business. People have a fundamental right to eat the kind of food they want, no matter how it is procured and how much anguish it causes to Hindus.’

All these arguments are erroneous as the culture of the land is respected everywhere around the world and Bharat should be no exception. Image a Chinese eating a dog in England or USA. In all probability, this would not be tolerated and the person would not only be sent to prison, but might be killed. Similarly, can a person think of eating pork in Saudi Arabia? Eating horse is considered taboo in the Anglo-Saxon world of countries like UK, US.

The proponents of beef consumption mock Hindus with questions similar to the ones listed below.

What strange, questionable questions & remarks. We all know that cow is an animal, but Hindus hold it sacred and are duty bound by their scriptures to protect and serve it. Many writers, including the ones writing for Hindupost, have already quoted from our scriptures and proved that Cow has been worshipped and respected for ages in Bharat. So, if anyone comes up with an argument that Bharat was once a beef-eating nation, it does not hold water.

By any stretch of imagination, drinking cow’s milk cannot be equated with killing a cow. By drinking cow’s milk, we do not breach the trust or break the bond of love, but by killing the cow we definitely breach the trust. The traditional Hindu way of milking a cow is not to milk all four teats, but leave one or two for calves. Another way was to allow the calf to drink before and after the milking of the cow so that the calf could drink to its satisfaction.

It seems that cows also don’t mind sharing their milk with humans if their own offspring are not denied their fair share by humans. It is quite evident from the fact that the cow does not release milk from its udder if its own offspring is hungry. Numerous instances have been found in the world where even wild species of one kind have breast-fed young ones of other species. Even breastfeeding mothers have breastfed, not only their own babies, but babies of other humans who are not lucky to have their own mother’s milk.

People also display a lack of knowledge about Hindu Dharma when they ask why not other animals. One of the core tenets of Hindu Dharma is respect for all living beings, fair treatment for humans and animals alike. Our gods can be seen in the company of different birds, reptiles, and animals such as cows, bulls, peacocks, rats, monkeys, lions, buffaloes, etc. We even feed poisonous snakes. Many people do not believe in lording over animals and it’s a noble thought. How could anyone who claims to be concerned about peace, harmony, human rights, animal rights mock at such a noble thought. Hindu Dharma allows the killing of another being only if it threatens the existence of another being. Though we love all animals, cow occupies a significant space in our hearts.

Another argument made in favor of beef consumption is that it is the poor man’s diet. It is another attempt by Hindu haters to dress their hate in the garb of rationality. It takes no mathematician to puncture this argument.

Average mutton price in Bharat is Rupees 360 per kg and average beef price is Rupees 250 per kg. Though there is a visible difference between the prices of the two commodities, beef is in no way so cheap that is should form a staple diet for a poor man. In one kg of meat there are approximately 12 medium-sized pieces and this would be enough to secure one time meal only for a large family and two meals for a medium sized family. Thus, the poor man of pseudo-intellectuals spends an average of Rupees 250 per day to secure one day’s meals for the family? If the same poor man spends Rupees 250 on procuring green leafy vegetable of different types, he would secure three days’ meals for a family if not more.

Communists claim to speak for the toiling masses. As bulls toil hard in farms, it would be great if communists embrace this toiling animal along with cows who form an essential part of wealth possessed by peasants. May be a simple act like this could revive their sagging fortunes across the world. It is a sure shot way to secure the support of animal lovers.

Each and every argument presented by advocates of beef consumption can be knocked off rationally as well as scientifically, but my concern is a bigger malaise that these intellectuals are spreading and sanctioning.

And that is how a hatred for Hindus and their beliefs are taking a toll on innocent animals. How could a person inflict pain on a powerless animal just because it is being revered by another person? If not poisoned minds, what else could explain the laughter that comes from the slaughter of innocent, helpless, speechless animals.

Gau Rakshaks should not take law into their hands and desist from indulging in any sort of violence; having said that, Hindus should not shy away from the noble deed of protecting cows. Any case of cow slaughter or cow smuggling should be dealt by the state under the laws enacted for the same. The maximum a Gau Rakshak can do is to inform the authorities and demand action from them.

There can be no substitute for lack of compassion for animals and it would be great if all people realize this. The government too cannot take an escape route by branding all Gau Rakshaks with the same brush. The government must take steps to enforce cow ban in letter and spirit and not let things go out of hand.