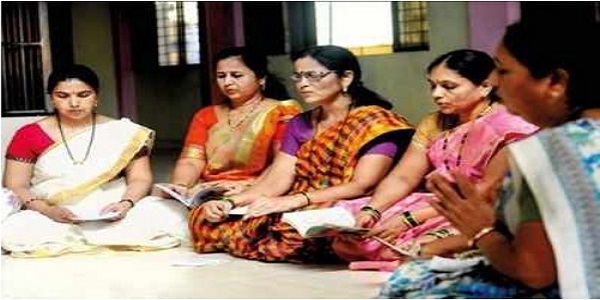 More than 150 non-Brahmin, semi literate women got Sanskrit degrees and became trained and certified priestesses over the past 18 years in and around Mohopada, a tiny village in Raigad district of Maharashtra. Single handed efforts of 101-year-old Shri Rameshwar Karve, a retired teacher, have made these women learn Sanskrit and indulge in conducting Puja.

As reported in The Times of India, these women faced resistance and non-acceptance initially but finally they have begun to get invitations to conduct puja in Mumbai, Thane and Navi Mumbai to commemorate births, deaths and every ritual, including Ganeshotsava. They have even solemnized marriages, conducted thread ceremonies and even performed the Shani Shanti Puja in a Dahisar home.

Shri Karve himself had done Sanskrit Shastri, a course equivalent to a bachelor of education degree. As told by his daughter Vasanti Deo, he started more than five schools in Raigad district. His focus was to make education, especially Sanskrit, accessible to the non-Brahmins. She also added that “Swatantra Veer Savarkar had told Tatya, as he is fondly called, to spread Sanskrit language.” Shri Karve is said to have met the freedom fighter in Ratnagiri in the 1920s when he was under house arrest.

The attrition rate was very high and it took Shri Karve several motivational talks to retain his students. As one of his students Bharti Mhatre (47) tells that he used to treat them like nursery students who are given sweets by their teachers to attend school. Another student Madhuri Kawade (62) tells that he was aware about household duties of his students so he never gave them homework because he knew they all might have to drop out if they took studies home.

All of them have completed Sanskrit Bharati, a six month correspondence course which has four levels; a written exam has to be cleared to cross each level. Many of them scored 80 to 90 marks out of 100 in their final exams.

These women faced rough journey to education. Many from their village called them names and warned them of divine punishments if they chanted Shlokas during menstruating period. However, for them these classes were like normal school that is not missed by female students even if they are menstruating.

One woman said that even though the pace is really slow but people are changing and warming up to them. Even today, as priestess when they perform any puja at any home, they hear comments and doubts from the host’s relatives whether they can really perform it properly. They choose to smile and continue with their duty.

With the help of their family members who chose to support their daughters and daughters-in-law to attend the Sanskrit class, these women are surely taking the language ahead and empowering themselves.