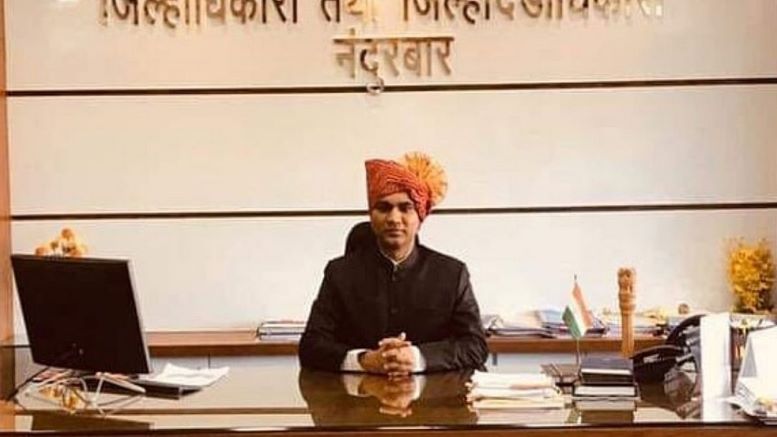 Even though the pandemic is as severe as the rest of Bharat in Maharastra’s Nandurbar, District Collector (DC) Dr. Rajendra Bharud has made a huge difference in the response to the crisis. The nation’s healthcare is devastatingly overburdened with the massive surge of cases but Nandurbar district, with a population of 16 lakh, is exhibiting an opposite state of affairs with 150 vacant beds and two oxygen plants that have a combined capacity to produce 2,400 liters per minute.

Due to its sufficient resources and robust health infrastructure, people from neighboring districts and states (including Madhya Pradesh and Gujarat), have been admitting themselves in Nandurbar. But even with this added caseload, the district has managed to not only control the positivity rate but also slash it by 30%. The daily active cases have decreased from 1,200 to 300.

According to a report in The Better India:

“Nandurbar District Collector Dr. Rajendra Bharud and his team, comprising administration staff, doctors, and volunteers, are to be credited for this feat. After the steady decline in cases, as well as assurances from the Central government regarding the amping of the vaccination program, many other cities and villages began dismantling their temporary COVID-19 facilities. However, Dr. Rajendra did not let his guard down.

Instead, he decided to ramp up infrastructure in case there was a resurgence of cases. “As cases were going down in India, I saw America and Brazil face a massive surge. I wanted to be prepared in case we witnessed something similar. So in September 2020, we installed the first oxygen plant in the district, which had a capacity to produce 600 liters per minute, even though our highest single-day spike was only 190 cases. In March, we installed another plant. As single-day cases touched 1,200 in April, we started preparing to install the third one. Soon, we will have plants with a combined capacity of 3,000 liters per minute,” Dr. Rajendra, who holds an MBBS degree.

Money was a crucial component in setting up a robust healthcare structure, which includes ambulances, ventilators, beds, oxygen plants, vaccines, medicines, staff, a website, and control rooms in every block. Dr. Rajendra used a combination of resources, including district planning and development funds, state disaster relief funds, and CSR to meet expenses.

“We didn’t want our doctors to be under any kind of pressure and provided them with everything they needed, even if that meant spending Rs 85,00,000 per oxygen plant. Oxygen cylinders are manufactured only in certain states, so by the time they arrive, several lives are at risk. Our plants directly extract air and provide oxygen through pipes to the patients. We also made sure that oxygen pipes were given as soon as saturation levels started dropping, instead of waiting for the critical stage. This way, patients use only 30% of oxygen, as against 90% in the latter situation. When oxygen starts dropping, it directly affects the brain and kidney, which makes it harder for patients to recover fast. Hence, oxygen levels need to be managed and taken care of in the early stages itself,” says Dr. Rajendra.

Places such as schools and community halls were converted into COVID-19 centers. The administration set up 7,000 beds just for isolation, and 1,300 beds were equipped with ICU or ventilator facilities. They also purchased 27 ambulances to bring patients to the hospital and 2 ambulances to move dead bodies. Remdesivir worth Rs 50,00,000 was purchased.

One of the early steps taken by the administration was creating a website and control room to help control the panic and systematically guide the citizens. This would also ensure that people were not running from pillar to post in search of beds.

During the first wave, the district had faced a massive crunch in terms of frontline doctors. Since there are no medical colleges in the region, finding experts was a challenge. So, Dr. Rajendra roped in all local doctors and trained them to perform vital procedures such as intubation and monitoring oxygen levels.

He has also made sure that vaccination drives are being carried out smoothly. Of the 3,00,000 individuals aged above 45, one lakh have already received the first dose. This is despite the lack of awareness around vaccination drives in the tribal district.

“Instead of calling people to us for vaccination, we allotted 16 vehicles to every part of the district to give the vaccine. This way, people didn’t have to travel on hilly terrains. We roped in teachers and sarpanches to spread the word about the seriousness of the situation, and it worked,” adds Dr. Rajendra.

With collective efforts from the Nandurbar administration, frontline workers, and people, this tribal district made itself self-reliant in every way. Moreover, Dr. Rajendra’s journey of becoming an IAS officer is inspiring. He was born in Samode taluka of the district to a single mother. He lived in a hut, studied in a government school, and worked his way up.”