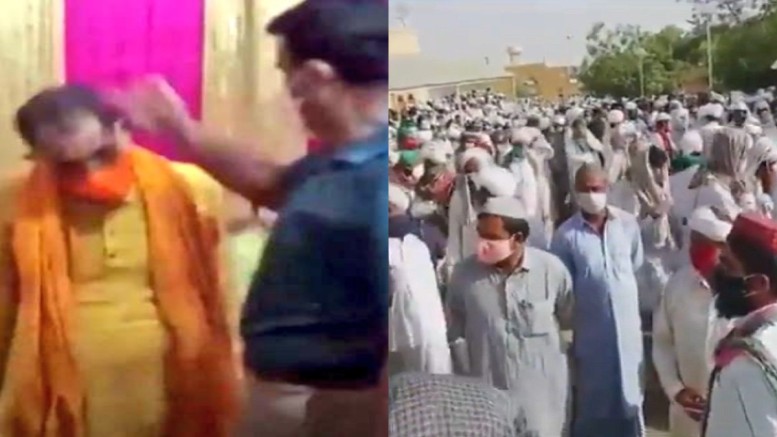 On 27 April, the District Magistrate of Tripura West disrupted a Hindu wedding and roughed up the priest as well as the groom while also manhandling and verbally abusing the persons present at the wedding. As the video of the event went viral, the DM had to apologize and CM had to order an inquiry. However, the efforts of the families of groom and bride to file an FIR against the DM have bore no fruit. In fact, they now face an FIR registered against them by the powerful officer!

The same day, 27th April, a Congress leader and influencial Muslim cleric and criminal, Gazi Faqir died in district Jaisalmer of Rajasthan. His last rites were attended by lakhs of his followers, despite there being a curfew in Rajasthan.

People may say that police chose to overlook this as Gazi Faqir’s son is a cabinet minister in Gehlot government. Despite being CoVID positive, he reportedly took part in the events! However that is a shallow understanding of the issue. Gazi Faqir was a hardcore criminal with first FIR against him filed in  1965. However, his whole history-sheet disappeared from police records in 1984. In 1990, the then SP S. P. Singh opened his history-sheet again, but was transferred within a month. In 2011, his file was closed, but reopened by SP Pankaj Chaudhary in 2013. However, Chaudhary was transferred within 48 hours!

However, Gazi Faqir was an influential politician and probably all influential politicians could do whatever he did. However, there are many cases where Muslims can be seen openly flouting the curfew imposed due to the spread of Chinese Virus. But even disregarding the current crisis, let us take a look at a well known social reality of Bharat. In almost every city, there are certain areas, which are “communally sensitive”, where even police is afraid to venture. Even when police goes there to arrest a criminal, more often than not, the local populace violently resists and police has no option but to retreat.

Let us take some other examples. The stone pelters of Kashmir valley used to rue that the security forces used pellet guns on them. This “atrocity” was routinely condemned by the national and international media. However, what happens when Hindus resort to similar demonstrations? The Jat Reservation Movement in 2016 is a tragic example. Around 30 Jat youth were killed in firing by the security forces who used real guns, not pellet guns. Many of the accused continue to face cases, while an amnesty scheme provides money and other facilities to youth in Kashmir. It may be pointed out that the Jats broke law, turned violent and were out of control. However, similar acts are done by Kashmiri youths regularly, even in the midst of anti-terrorist operations. Take the example of Anurag Poddar, whom most of us have already forgotten. This young fellow was shot dead by the police, just because he was taking part in a Durga pooja murti visarjan procession in Munger, Bihar. We all have seen videos of Muslims openly flouting rules to go to mosques and Sikhs even attacking police in Nanded! No one dared to shoot.

This begets the question : Are Hindus really a majority in the Republic of Bharat, or second class citizens with lesser rights. Incidentally, the Constitution does discriminate against Hindus and in favour of minorities. This happens most prominently in the fields of education and management of religious places. Only Hindu religious places are managed by the government as if Hindus are incapable of the same. Similarly, only Hindu children are deprived of the right to get religious education in schools, while others can legally get such education.

The result is a Muslim community, for whom “Quran is the constitution” and loping off the head of any critics is a religious right. On the other hand, the Hindu community has a majority who do not have even basic knowledge of their ancestral religion and who are proud of this ignorance in the name of liberalism and secularism. However, this is not the end of legal discrimination against Hindus. The Muslim personal laws add another dimension to this privilege.

The Muslim privilege is also apparent in the version of history written by the Communists. In this version, Bharat was welded into a “composite culture” by the Muslims. The history of Hindus is denigrated and played down so as not to offend the Muslims. The Muslim perpetrators of Hindu Holocaust are presented as secular heroes and their bigotry eiter completely hidden or explained away using flimsy excuses. Despite claiming such a “glorious” history, the Muslims retain the privilege to blame Hindu society, specifically Manuwaad, for their social backwardness. Perhaps the irony is lost on them.

It was thought that Muslim privilege was a function of their electoral power in Bharat. They voted as a block and could ensure the victory of their chosen candidate and party. This notion has been dealt a death blow in recent years. Even though the BJP, which rules at the centre and many states in the country, has very few Muslim legislators, the privilege remains. Clearly the source of privilege is not in political power.

The real source of Muslim privilege is in the street power they can mobilize. The state is afraid of this power and thus tries to sweep it under the carpet and supports inventing of myths to appease them. What of the Hindus? Even a doting mother does not feed the baby until it cries. Until Muslims have a near monopoly on street power and nuisance value, Hindus would continue to be treated as second class citizens.