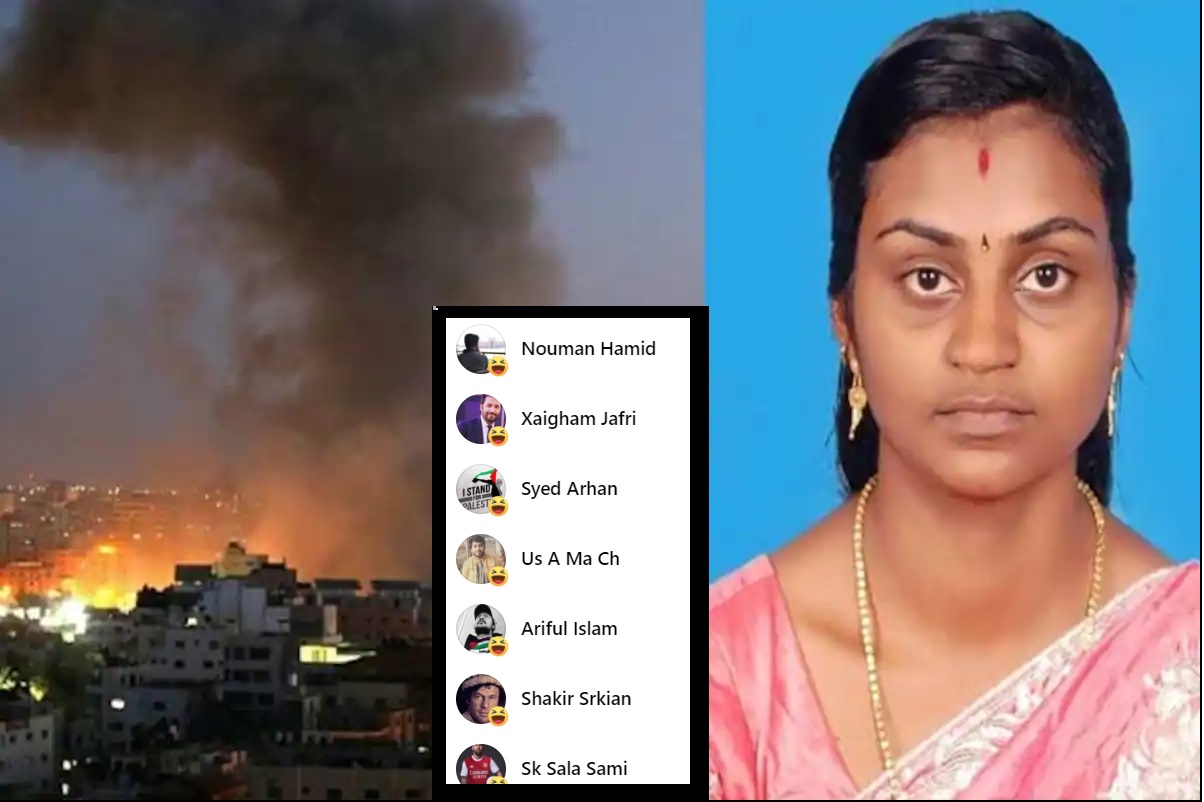 Soumya Santhosh, a Malayali nurse from Idukki, Kerala who was working as a caregiver of an 80-year-old woman in Israel for the past seven years, was killed in a rocket attack by terror outfit Hamas.

32-year-old Soumya is survived by her husband and 9-year-old son who are in Bharat. She was talking to her husband K. Santosh using video call and discussing how the situation was turning worrisome in Israel when the husband heard a massive explosion and the call disconnected. There was no answer from the other end when the husband called back. He immediately contacted some of Soumya’s friends in Israel, who informed him that a Hamas-fired rocket had taken down the Ashkelon apartment where Soumya lived with the elderly woman and both of them had died in the terror attack.

If there is anything more disturbing than the brutal death of Soumya, it is the shameless, unabashed laughter of the Islamists at her death. They are leaving their footprints, their laugh emojis on all digital platforms that carried the tragic news. When you click on the laughing emojis, the identities and names of these radicals living amongst us lie exposed. Here are a few such news pieces. 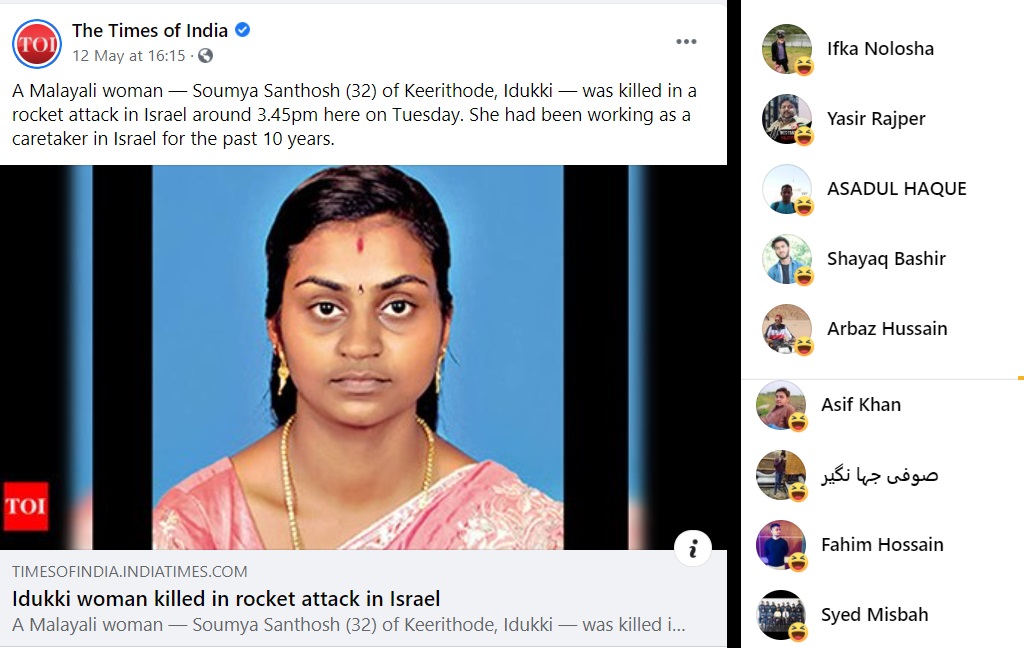 Muslim social media users have been found relishing several deaths routinely since the demise of former Prime Minister Atal Bihari Vajpayee in 2018. But it was their brazen gloating at the martyrdom of the 40 brave-hearts claimed by the Pulwama suicide bomber that had taken the nation by shock, and their inhumanity had been criticized heavily in social media. 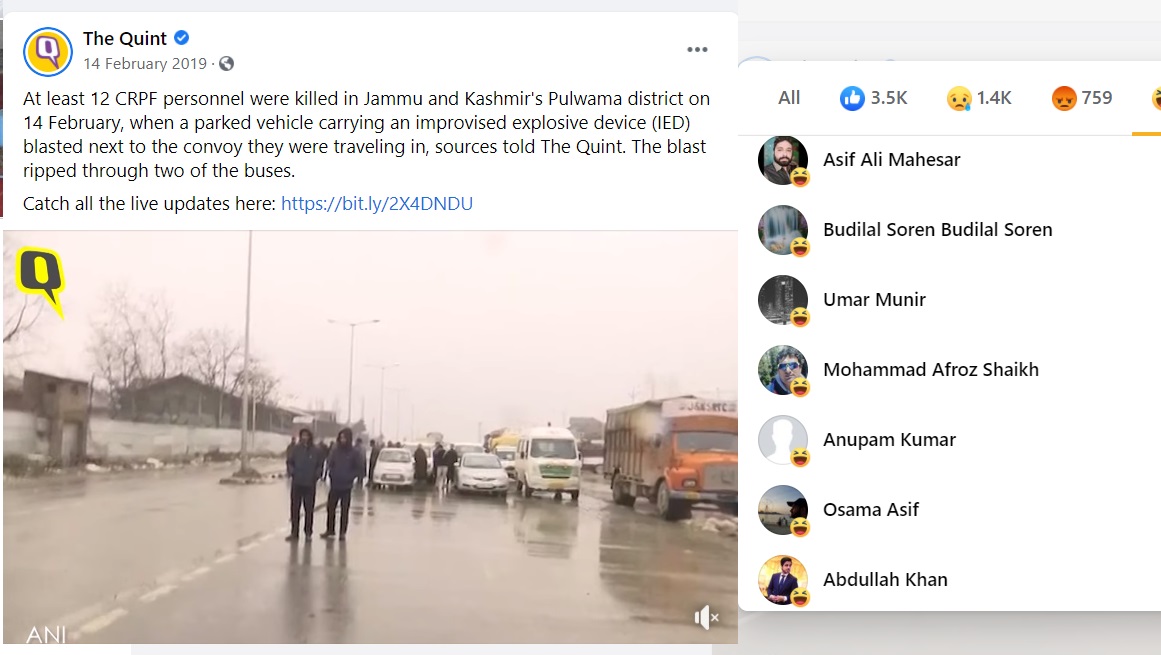 After attacking humanity at every opportunity, shameless Islamists have the gall to promulgate the narrative of “saving humanity” by standing for the terror groups operating in Palestine. While the world is torn asunder into two camps, one siding with Israel’s right to defend itself and the other backing Palestinian actions, most Muslims have been linking ‘humanity’ to their demand for a ‘Free Palestine’.

Twitter Muslims preach “one doesn’t have to be a Muslim to support Palestine against Israel, one only has to be a Human”. And within minutes, people bearing the same identity go laugh at the news of a Hindu nurse’s brutal death in an Islamist terror attack. They are not ashamed over repeated crimes against humanity by Islamic terrorists across the globe, but use the word “humanity” with craft and shrewdness to evoke the world’s sympathy towards their community. They excel at the art of deceit and that is not news anymore.

Islamic terrorists unleash violence on every community and identity that comes in the way of their goal of world dominance or establishing an Islamic Caliphate. They butcher, bomb, rob and rape and they do that with zero remorse and impunity guaranteed to them by the liberal world order. When their violence gets the rightful retaliation, be it from Israel, Bharat, or any other anti-Islamist force in the world, they push their women and children at the forefront to play victim, evoke sympathy, and howl in the name of humanity.

The Islamist men will carry out atrocities, while pitiful pictures of the women and children will whitewash their sins. From the much talked about dadi of Shaheen Bagh, the terror-inciting Safoora Zargar of the anti-Hindu riots in Delhi and her pregnancy, to Malala and the well-directed, well-framed pictures of crying children and distressed women in Syria taken with the help of professionals, is all part of their sinister design.

When we first discovered these specimen, we thought that this hate is political, that this is directed at the BJP, at Hindutva, or at nationalists, or the Indian Army defending the nation. However, the unkind gloating of the Muslim names over the dead body of a nurse that had no known political inclination, who was only caring for an elderly woman in Israel, convinces us that these sub-humans celebrate every death that is not from their community and will support every terror attack carried out by their co-religionists; political parties or ideological opposition are only a veneer, now ripped off.